A prominent religious order is contesting the bargaining power of religious movements in Turkish politics. 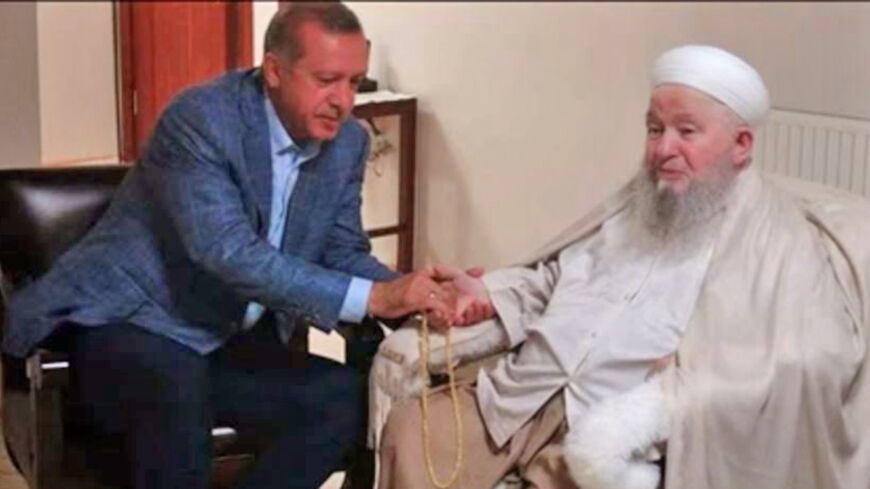 The September issue of the conservative journal Marifet, a monthly science and culture publication by the Ismailaga religious order, published a searing cover story titled “Whose New Turkey Is It?” harshly criticizing senior members of the Justice and Development Party (AKP) government.

Ismailaga is one of the most eminent religious orders in Turkey, centered at the Ismailaga mosque in the heart of Istanbul. Belonging to a larger order of Naqshbandi, a major spiritual order of Sunni Islam, which has spread from China to the Balkans, Ismailaga stands as somewhat different from other religious orders in Turkey. Members of the order abide by a certain dress code. Men sport beards and wear caftans and baggy trousers in daily life and white turbans at prayer time, while women mostly wear a black hijab with a veil. Situated in the Carsamba quarters of the Fatih district, the order has established the most visible Islamic enclave in Istanbul. From toothpaste to prayer rugs, special products designed for the preferences of observant Muslims in this neighborhood are readily available.

The order is certainly not archaic, with adherents being active on social media, and having just established a TV channel and created a mobile application of the order’s Web page that can be downloaded from Google Play and the Apple Store.

Marifet's cover story was written by Muhammed Keskin, one of the order's influential leaders and a relative of Mahmud Ustaosmanoglu, the elderly sheikh of the establishment. This is the first time the order directly criticized the AKP elites in writing. It is seen as the harbinger of further discontent to be voiced from the most conservative sections in Turkey against the AKP. This calls for understanding the main argument of the piece and its immediate implications.

Keskin expressed the resentment of pious Muslims in the current establishment clearly by saying: “In our quest to get rid of the strict secular order, which does not allow a living space for Muslims, we are now concerned about the invasion of perverted foreign ideas.” Keskin argues that the real Anatolian Muslims are forsaken at the expense of Wahhabi and Shiite beliefs — indicating the influence of Saudi Arabia and Iran — in Turkey.

The only person whose name is spelled out in the piece is Hayrettin Karaman, the well-respected theologian and columnist for the pro-AKP daily Yeni Safak. Karaman is criticized for not providing adequate Islamic guidance to the government. The piece voices strong disapproval of a few AKP elites without naming names. Two of them are worth noting: former Minister for EU Affairs Egemen Bagis, who allegedly mocked verses of the Quran on the phone with a journalist, and Efkan Ala, the minister of interior who was perceived as insulting the Prophet Muhammad. While campaigning for the presidential elections in July 2014, Ala praised the AKP for its “humility” in lifting the headscarf ban and saying that even the Prophet Muhammad “showed signs of pride after his conquest of Mecca, but the AKP would not.” While Turkey’s top cleric Mehmet Gormez, the head of the Religious Affairs Directorate, struggled to justify Ala’s comments, Cubbeli Ahmet Hoca, a well-known preacher of the Ismailaga order, spoke passionately against Ala, criticizing him of being ignorant and unworthy of his position.

Indeed, the Marifet journal’s September cover story has been long in the making for the followers of Hoca, whose sermons openly lambast AKP elites who offend and contradict Islam. Most importantly, Keskin wrote that genuine Muslims were disappointed that these men who insulted Islam were protected by those who occupy the highest seats of government.

When Al-Monitor investigated the impressions of AKP elites and pro-AKP conservative columnists in early September about Keskin’s article, the common mood was that since only a few hundred people read the journal, the story was not worthy of attention. One pro-AKP journalist, who asked to remain anonymous, told Al-Monitor, “The issue of religious orders in Turkey is sensitive. It is better to let the orders resolve their own matters. This seems like an internal issue of the order.”

While the pro-AKP elites downplayed the publication, the Gulen movement, which is critical of the government and has the widest media outreach of any religious order in Turkey, ensured the piece appeared among their headlines. It was subsequently shared by secular media outlets as well. Thus, Keskin’s piece reached well beyond the regular conservative readership in Turkey.

So, the issue got more complicated. On Sept. 22, the pro-AKP media announced that the Ismailaga order had issued a correction asking the pro-Gulen movement paper Zaman daily to make corrections to its story. The announcement stated that the piece only reflects the author’s personal views and not those of the order. On Sept. 25, Marifet lashed out against the two pro-AKP dailies, Yeni Safak and Sabah, saying the Ismailaga community stood by the piece, and that it was written with the knowledge and approval of their sheikh. Other religious and political orders, such as the nationalist religious Alperen movement, declared their support for Keskin against the pro-AKP media. Gulen followers — who used to be at odds with the Ismailaga order — cheered the open, courageous and poignant disapproval of the AKP’s elites along with more secular groups on social media and in print.

While all this was happening, the top AKP officials remained silent. Turkish President Recep Tayyip Erdogan, known for his outbursts against criticism, preferred not to directly engage the order, which he has had good relations with in the past. Erdogan had visited Sheikh Mahmud Efendi prior to the last election in August 2014 seeking his blessings. The imams from the order traveled to Soma to pray for the victims of the mine disaster and advise the mourners not to speak out against the AKP government. Hoca has gone on record praising and praying for the new prime minister, Ahmet Davutoglu. On Sept. 28, Ismailaga elders visited Erdogan and photos were immediately posted on the Ismailaga and pro-AKP media websites.

Demirhan makes a crucial point for two reasons. Traditionally, there has been a tacit competition between different religious orders, and therefore, governments could easily play one against another. The perception that religious orders should refrain from politics has also been used by pro-government media outlets to tarnish a religious order’s reputation if it dare speak up against the government.

Keskin’s article asking whose New Turkey it is shows the ulema of Turkey disapproving of the AKP elites’ code of conduct and warns them that these types of behavior may alienate the pious, observant or Islamist voters. The AKP is facing a serious dilemma with the elections in June 2015: If these religious orders collaborate rather than compete, how can the AKP find the least common denominator to satisfy most, if not all, of them?

Looking at the latest photos of Erdogan with Ismailaga elders, it seems he knows well he cannot afford to lose the support of the order, while still battling the Gulen movement. So far, religious orders have quietly played a rather stabilizing role for the AKP behind closed doors. It seems Erdogan and his men will pay a hefty price to sustain the stability.