Turkey’s pro-AKP media is presenting a counterfactual world to its readers; the latest example is "news" about the "FBI arrest" of 9/11 deniers. 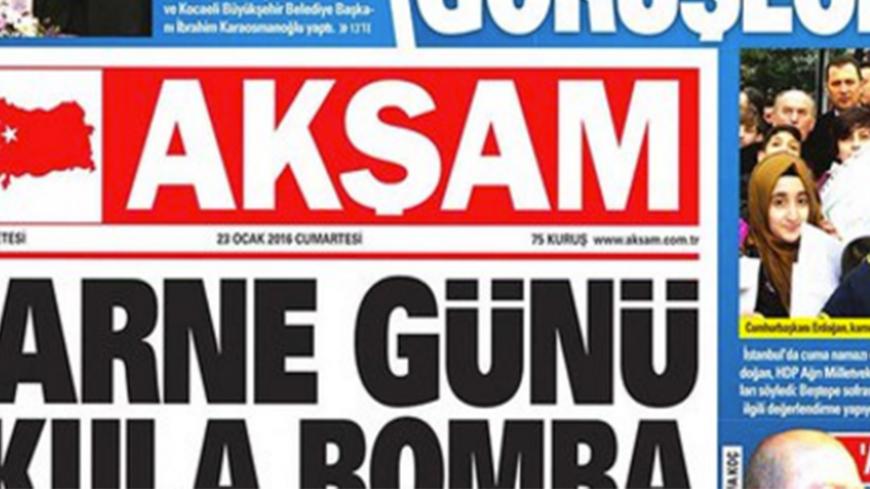 A headline of the Turkish pro-government newspaper Daily Aksam is displayed on Twitter, Jan. 22, 2016. - TWITTER/Aksam

Daily Aksam, one of the many Turkish pro-government newspapers, ran on Jan. 18 a bizarre story titled “America did not forgive its academics.” The article reported that some 75 academics at universities in the United States who claimed 9/11 had been an inside job “were arrested by the FBI, as demanded by the US Senate.” The photo that accompanied the story showed renowned American intellectual Cornel West being handcuffed by two police officers.

The impressive story was published in almost every pro-government media outlet. Daily Sabah, another passionately pro-government paper, added to its report that US Vice President Joe Biden, who dared to advise the Turkish government on academic freedom during his recent visit to Turkey, voted “yes” in the Senate to have these American academics arrested.

The story was unabashedly fake. Yes, a few of the 9/11 Truth campaigners had problems at their universities, but an “FBI arrest” never took place, nor a “Senate vote” that requested arrests. (Hence, Biden never took part in such a “vote.”) The photo showing a handcuffed West was unrelated to this “news story”; West was arrested during the Ferguson protests in October 2014.

So why did the pro-government media invent such a blatantly fake story? And what does this tell us about the state of affairs in Turkey?

The context of the fake story is quite obvious. Turkey has been discussing a petition titled “We will not be a partner to this crime" that was signed by some 1,100 academics, including international names such as Noam Chomsky. The text of the petition, which blames the government for various human rights violations during its ongoing anti-terrorism campaign in the southeast, could be criticized for being blind to the other side, which is the terrorist activities of the Kurdistan Workers Party (PKK). But the government, and especially President Recep Tayyip Erdogan, decided to demonize and criminalize the petition's signatories. Prosecutors initiated investigations of these academics for “terrorist propaganda”; some were detained by the police, albeit briefly, and others were demoted. Meanwhile, the government media has publicly condemned the academics as “terrorists” and “traitors.”

This wave of intimidation on free speech has naturally brought significant criticism on the Turkish government by Turkish liberals, the European Union and even the US government via a blunt statement by Biden.

Apparently, the fake story in daily Aksam was a response to all this criticism. The moral of the story was clear: Do not believe in these hypocritical Westerners who criticize us when we go after the traitors in our nation. In fact, they go after their own traitors even more aggressively.

This narrative is not just a passing theme in AKP propaganda; lately, it has become a dominant theme. Erdogan himself said in early 2015, in the face of criticism on Turkey’s declining media freedom, “Neither Europe nor any other country has as much media freedom as Turkey. In those countries, you cannot attack the president or the prime minister.”

Since this argument is factually incorrect, it cannot be substantiated by facts. Daily Aksam’s fake story apparently was designed to close this factual gap. Moreover, this was only one of the many examples of its kind. During the Gezi Park protests of June 2013, for example, daily Yeni Safak had published an “interview” with Chomsky, putting pro-AKP words into his mouth. However, Chomsky announced shortly after that the interview as reported was distorted and fake. The incident turned into a tragicomic scandal, as Yeni Safak had “quoted” Chomsky, the eminent linguist, in broken English.

In March 2015, Yeni Safak published another ambitious report titled “The Freemasonry Documents of Gulen.” The article claimed that Fethullah Gulen, the AKP-ally-turned-archenemy, was in fact a covert Freemason — a member of the order commonly abhorred by Turkey’s religious conservatives. Yet, the never-seen-before documents Yeni Safak ran with great fanfare were declared to be fake, even by a historian who writes for another pro-AKP newspaper.

The more common technique in the pro-AKP media, however, is not to fully invent “news” but to distort it. Oft-repeated examples are the cases of Julian Assange and Edward Snowden that have repeatedly been used by pro-AKP propagandists in the past few years to argue that just like Turkey, the United States also criminalizes journalists who “expose state secrets.” In regard to Assange and Snowden, however, the accusations were obtaining and leaking classified information, not publishing it. No wonder Assange’s WikiLeaks files were freely published in many newspapers in the West, such as The New York Times, The Guardian, Der Spiegel, Le Monde and El Pais.

Thus, the pro-AKP media is presenting a counterfactual world to its readers, claiming that Turkey is actually “the freest country in the world,” the country is full of too many spies and traitors, and Western governments are in fact more heavy-handed when it comes to their own spies and traitors. Therefore, all the criticism the Turkish government is facing for its authoritarianism is in fact nothing but a conspiracy against Erdogan’s glorious “New Turkey” — the hope of the downtrodden and the fear of the wicked.

Luckily, Turkey is not North Korea, and individuals have access to information other than the semi-official propaganda. One can search the Internet, fact check or just follow nonpartisan or opposition media outlets and websites to get alternative views. Yet, many people do not bother with all this and happily believe in the pro-AKP narrative that powerful media outlets subject them to. In turn, this helps the AKP preserve enough mandate to keep its political domination intact.