The delusional, conspiratorial narrative in Turkey’s pro-AKP media raises questions about the capacity of the ruling elites of President Recep Tayyip Erdogan's "New Turkey" to understand the world as it really is. 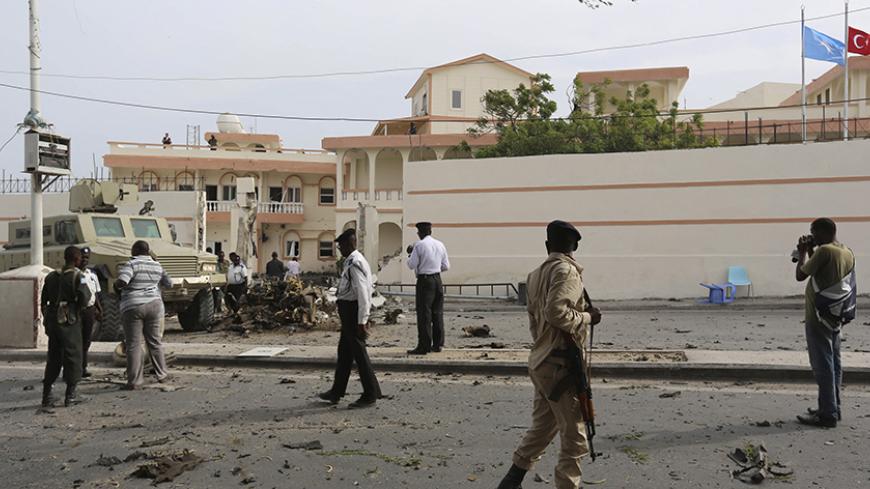 Somali soldiers and African Union Mission in Somalia peacekeepers secure the scene of a suicide car bomb in front of the SYL hotel in the capital Mogadishu, Jan. 22, 2015. - REUTERS/Feisal Omar

On Jan. 22, a car bomb exploded at the gate of a Mogadishu hotel, where a Turkish team was getting ready to welcome Turkish President Recep Tayyip Erdogan. No Turkish nationals were among the six victims, yet the suicide attack was interpreted by both Turkish and Western media as an assault on the Turkish presence in Somalia. The jihadist group al-Shabab, also known as al-Qaeda of Somalia, claimed responsibility, and a spokesman for the group said that Turkish officials had been specifically targeted.

In return, one would expect to see some analysis and concern about al-Shabab in the Turkish media. However, the pro-government media — a steadily growing segment — has shown almost no interest in the group, and has rather focused on a different preoccupation: the alleged British conspiracy behind al-Shabab.

After the attack, Yeni Safak, arguably the ideological standard-bearer of the Justice and Development Party (AKP), declared in a headline, “The suspect behind the attack is England.” The two countries most disturbed by the Turkish presence in Somalia are Israel and the United Kingdom, the article explained. “Despite the fact that another organization claimed [responsibility for] the attack, some reliable sources argue that British intelligence is behind it,” the article stated. These “reliable sources” were not identified, and the “organization [that] claimed the attack” — al-Shabab — was not even mentioned by name. On the same day, the British Embassy in Ankara refuted these “illogical and inappropriate claims.”

Perhaps this was an eccentric take by Yeni Safak, a newspaper known for its love of conspiracy theories. But most pro-government writers in the print and social media seemed to agree. Editor-in-chief of the daily Star, who was on Erdogan’s plane during the visit to Somalia, wrote in passing that in the Horn of Africa, Turkey was struggling with the “plots of imperialist states and their subcontractors such as al-Shabab.”

The word “subcontractor” must be carefully noted, for it is the token term used in Turkey’s pro-government media to define any Middle Eastern (especially Islamist) group that targets Turkey. When the Islamic State (IS) kidnaps Turkish diplomats in Mosul, for instance, or a female suicide bomber with apparent IS ties hits downtown Istanbul, the same commentators tell us not to look at these “subcontractors,” but their "masters behind the scenes" — typically the United States, the United Kingdom or Israel. This narrative has become so readily accepted that, if questioned, one may be accused of working with the puppet masters.

The question here is how all these Turkish pro-government commentators know that jihadist groups such as al-Shabab, al-Qaeda or IS are nothing but “subcontractors” to Anglo-Saxon or Jewish conspirators. My answer, based on long observation, is that this “knowledge” comes from two simple assumptions: First, no “real Muslim” can be a terrorist, and second, no “real Muslim” can target Erdogan's glorious “New Turkey,” which is doing so much for the sake of Islam and Muslims. Therefore, all seemingly jihadist threats to Turkey must be coming from the “enemies of Islam,” who work behind the scenes from their lairs in Washington, London or Tel Aviv. (For the same reason, the Fethullah Gulen movement’s struggle with the AKP cannot be a mere intra-Muslim conflict, but an Anglo-Jewish conspiracy in which the Gulenists are pawns.)

Deep down, I sense an even more fundamental belief behind all these conspiratorial assumptions: No evil can arise from within the global Muslim community. Evil is manufactured by non-Muslims (especially Westerners and Jews) and carefully planted among Muslims. We should, therefore, not worry about Muslim extremists. We should rather worry about the hidden evildoers behind them, somewhere out there.

Once we drop these beliefs, however, the world looks more complex. Groups like al-Shabab, al-Qaeda and IS have plenty of ideological reasons to consider Turkey an “apostate state” and regard it as a legitimate target. Yet, these reasons are almost never analyzed by the pro-government Turkish media, whose focus remains on imagined Western schemes. (To be fair, some serious criticism of Salafist extremism occasionally appears, but it really does not set the tone.)

Inevitably, this dominant conspiratorial narrative in Turkey’s pro-AKP media raises questions about the capacity of the ruling elites of the “New Turkey” to understand the world as it really is, and thus formulate fact-based, rational policies. One slightly comforting possibility is that this delusional narrative is pumped out mostly for domestic public consumption, whereas the more sophisticated minds of the AKP see things more clearly and maintain policies on rational grounds. (Personally, I think that is the case, especially since the Gezi Park protests of June 2013, when lunatic conspiracy theory became official narrative, but many rational policies silently continued.) However, even then, the constantly fed paranoia may have inevitable consequences on policy-making. The more you repeat a delusion, even for propaganda, the more you believe in it. Moreover, this parochial propaganda is destined to suffocate Turkey’s intellectual landscape, where officially blessed opinion leaders produce laughable outtakes for the outside world.

In short, what the “New Turkey” desperately needs is a fact-based and analytical media. This would entail a more self-critical approach to the Muslim world and saner criticism of the West. Just a bit of serious reading to understand the ideology and motives of jihadist groups such as al-Shabab would be a good start.