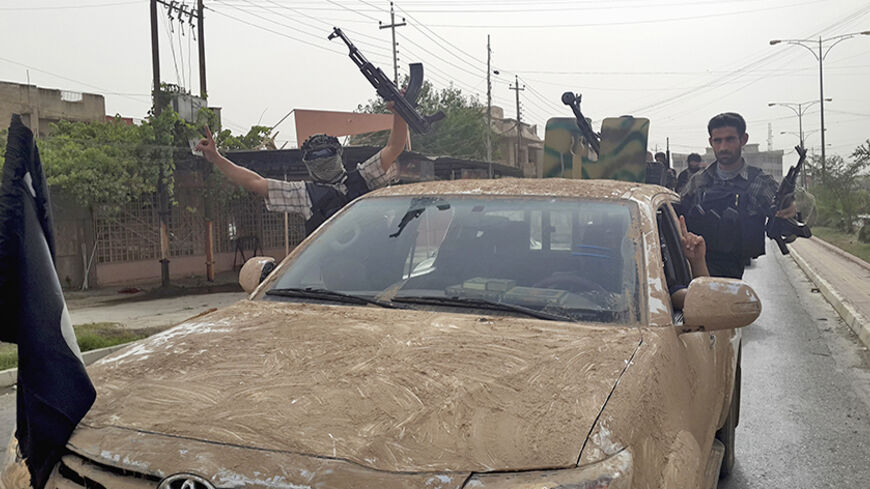 Fighters of the Islamic State of Iraq and al-Sham (ISIS) celebrate on vehicles taken from Iraqi security forces on a street in Mosul, June 12, 2014. - REUTERS

When the Islamic State of Iraq and al-Sham (ISIS) captured Mosul on June 10, kidnapping more than 80 Turks, Turkey woke up. The militant jihadist group, which was hardly a matter of concern in the media before this incident, became a national preoccupation. Despite this focus, however, there exists an ideological blind spot that, I believe, should be addressed to develop a more factual understanding of the world, in Turkey as well as beyond.

The blind spot is simply this: Many Turkish opinion leaders, especially those in the pro-government media, cannot accept ISIS, or its ilk, as extremist Islamist actors with genuinely held beliefs and self-defined goals. Rather they take it for granted that these terror groups are merely the pawns of a great game designed by none other than the Western powers.

For example, Abdulkadir Selvi, a senior journalist who has been quite vocal in the press and on television generally espousing a pro-government stance, wrote a piece last week titled "Who is ISIS working for?" This was his answer: "Al-Qaeda was a useful instrument for the US. To put it in an analogy, ISIS was born from al-Qaeda's relationship with [the] CIA. The West gave its manners to al-Qaeda and now it designs our region through the hands of ISIS." In short, al-Qaeda and its offshoot ISIS are both creations of the US Central Intelligence Agency and serve American interests.

Writing in the same pro-government daily, Yeni Şafak, the prominent columnist Yusuf Kaplan took a similar position. His culprit, however, was not the United States, but the United Kingdom. He wrote, "There is no such thing as ISIS. There is rather a heinous power called England … al-Qaeda was an instrument of the Americans, whereas ISIS is an instrument of the English."

Yet another writer with strong pro-government views, Cemil Ertem, advanced a conspiratorial line in his column in the daily Star, but added a crucial element. ISIS, he argued, is "the product of the same center that also orchestrated Dec. 17" — referring to the day the corruption investigation, or "coup attempt," against the government of Prime Minister Recep Tayyip Erdogan became public. Accordingly, that conspiratorial "center" first tried to topple Erdogan with a bogus corruption investigation, and when that failed, it reignited Kurdish tensions in the country and finally ordered ISIS to attack "Turkey's political and economic assets in Iraq."

I quoted just three writers, but there are many similar examples. It would not be unfair to say that this conspiratorial understanding of ISIS is a powerful, if not dominant, narrative within Turkey's pro-government media. To be fair, there is more fact-based analysis in the media. How much influence this conspiratorial thinking has on Turkey's decision makers is debatable.

The first problem with these theories is that they are astonishingly Turkey-focused. To say that some hidden power center is using ISIS to hinder Erdogan's "New Turkey" is to ignore so many crucial facts and issues beyond the country's borders, such as the region's Sunni-Shiite tensions, the Salafi-jihadi ideology, the exclusion of the Sunnis by Iraqi Prime Minister Nouri al-Maliki's government, the Baathists' contempt for Maliki, tribal divisons, lack of democratic cultures, inner dynamics of civil war, and so on. The fact is that although Turkey is indeed increasingly important in the region, the world does not revolve around it, and not everything that is problematic for Turkey is a carefully crafted plot against it.

The second problem, also relevant to the broader Muslim world, is the well-intentioned desire to draw a clear line between Islam and terrorism. This often results in declaring that groups like al-Qaeda and ISIS "have nothing to do with Islam," and this flows easily into the conspiracy theories: Since these groups have nothing to do with Islam, they must therefore be the creation of the CIA et al. as part of the effort to defame Islam and devise pretexts for Western colonial designs.

The fact, however, is that violent jihadists have something to do with Islam in the same way that the crusaders or inquisitors had something to do with Christianity: They are violent fanatics of a major religion whose mainstream is peaceful. These fanatics will be rightfully dealt with not when they are dismissed as paid agents, but when they are understood, analyzed and challenged as genuine believers of a radical theology.

A third problem is Turkey's state-centered political culture, in which there is no space for nonstate actors with their own goals and ambitions. That is why all such actors are explained away as mere puppets of states, especially the supposedly all-powerful Western states.

None of this means, of course, that Western colonialism and interventionism are blameless for the current chaos in the Middle East. Britain, along with France, indeed planted the seeds of conflict a century ago, with their imperialist regional design in the Sykes-Picot Agreement. Then, for decades, Western powers supported the dictators and juntas that served their interests. In 2003, the US-led invasion of Iraq, with Britain prominently taking part, toppled Saddam Hussein, but also acted as a "trigger for this savage violence," as Christopher Meyer, the British ambassador to the United States during the war, put it in a recent article.

Most disastrous results of Western policy are indeed the unintended consequences, as is the case with most human actions. Moreover, the West is now genuinely alarmed about al-Qaeda, ISIS and similar extremist groups (among them Boko Haram in Nigeria and al-Shabab in Somalia), not blissfully manipulating them to further new imperialist designs. In fact, there is hardly anything resembling a new design, but instead an increasingly chaotic and unpredictable world.

Today, Turkey, as a secular democracy and NATO member, should work with its Western allies to both protect itself and help end the bloodshed beyond its southern borders. Turkey's public intellectuals can assist with this (and other issues) only when they stop inventing ideologically driven conspiracy theories and focus on grasping and analyzing the complex facts of Turkey's complicated neighborhood.