Turkish Islamists’ Middle Eastern vision did not begin with a sectarian outlook, but the existing sectarian tension may change this. 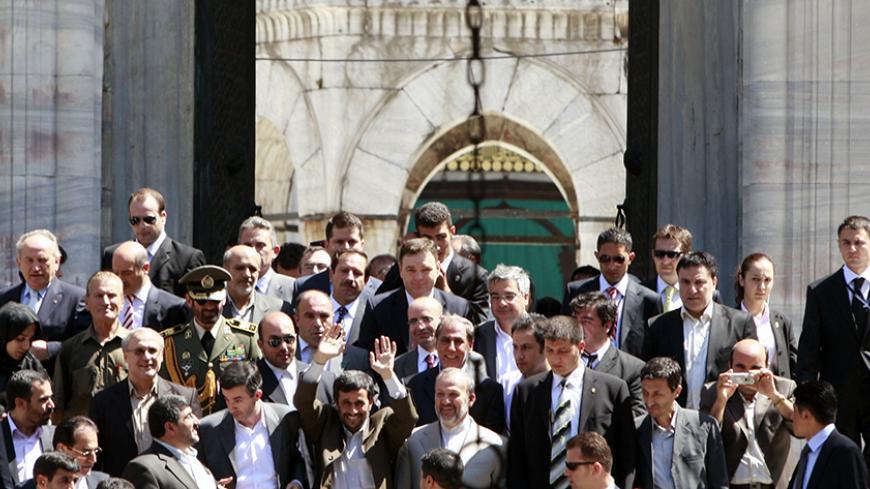 Then Iranian President Mahmoud Ahmadinejad waves as he leaves the Blue Mosque after Friday prayers on the second day of his visit in Istanbul, Turkey, Aug. 15, 2008. - REUTERS/Fatih Saribas

When former Iranian President Mahmoud Ahmadinejad visited Turkey in 2008, he was warmly welcomed by Turkey’s Islamists, who were angry at the United States over the occupation of Iraq and at Israel over the suffering in the Gaza Strip. Ahmadinejad was embraced as a defiant hero against both.

Today, eight years later, the mood in Turkey is quite different. If the current Iranian president visited the Blue Mosque, he would probably see a wave of protests instead of welcoming crowds. The Islamist media is not full of praises for Iran as an anti-imperialist hero; rather, it strongly criticizes its eastern neighbor as an imperialist power. At the extreme, the distaste with Iran even extends to its dominant sect of Islam, Shiism, in websites or social media accounts that define Shiites as heretics who stab the real Muslims — Sunnis — in the back.

This dramatic change did not happen because Turkey’s Sunni Islamists suddenly became sectarian after a theological soul-searching. It happened because of a major political drama they witnessed: the Syrian civil war. From the beginning of the war in spring 2011, both the Turkish government led by Recep Tayyip Erdogan (then prime minister, and now president) and the Islamists in its base focused on the brutality of the Syrian regime over its people — especially the Sunni opposition. When Iran and proxies such as Hezbollah emerged as the biggest protectors of this regime, the anger at Bashar al-Assad and his “Shabiha” turned into anger against Iran and the broader “Shiite-Alevi axis” in the region.

Lately, Iraq added more to this picture. Turkey’s mainstream Islamists have never supported the Islamic State (IS), and rather saw it as an extremist force that puts shame on Islam. Yet at times they “understood” it as a Sunni reaction to the Shiite-dominated government in Baghdad. The latter’s Shiite militia, especially the Popular Mobilization Units, became notorious in the Turkish Islamist media as a force as brutal as IS and a major threat to the Sunnis of Iraq.

In other words, while the Turkish Islamists’ Middle Eastern vision did not begin with a sectarian outlook — a nice motto Erdogan has reiterated goes, “I am neither Sunni nor Shiite, just Muslim” — the existing sectarian conflict has began to influence them.

This sectarian perception comes out in two forms. One is the milder one, which blames Iran not for Shiism but for “Persian imperialism.” Can Acun, a Middle East expert at the pro-government think tank SETA, makes this argument when he states in a pro-government daily, “Iran represents a neo-Persian ambition wearing a Shiite mask.” Accordingly, the Shiite identity is merely a tool that Iran as a nation-state is using to advance its imperialist goals.

Another Islamist voice in the pro-government media, columnist Yusuf Kaplan, takes a similar line in a piece titled “Iran must be stopped, but not by falling into Iranian sectarianism.” According to this argument, it is none other than Iran that is fueling sectarianism among Muslims, and Turkey must undo this scheme — but mainly by protecting the “Sunni spine of Islam.” Kaplan adds the conspiracy theory that — despite all its anti-Western rhetoric — Iran is in fact in a covert collaboration with the West, acting as the latter's Trojan horse among Muslims.

The harder anti-Iranian line, which clearly takes an anti-Shiite form, is found less in the pro-government media but more in more marginal websites and social media accounts. One of those sites is www.irangercegi.com (or irantruth.com), which presents this grim quote: “The Shiites are more dangerous than the People of the Book [Jews and Christians].” The site presents articles and graphics that unabashedly demonize the Shiites as “rafida,” a derogatory term that implies heresy. On social media, such bilge gets mixed with the enmity against the Alevi minority in Turkey, which harbors some pro-Assad views that also agitates Turkey’s Sunnis.

By looking at all this, it would be a gross exaggeration to think that Turkey is on the brink of a sectarian conflict. Yet still, the sectarian narrative is disturbing, and the sensible Islamic opinion leaders in Turkey must take a clearer stance against it.

One point they should see is that Shiite sectarianism, about which they rightfully complain, is not taking place in a vacuum. Since the Iraq War of 2003, a radical Salafi movement emerged in the Middle East with a fiercely anti-Shiite line. Shiite mosques and shrines were bombed by al-Qaeda in Iraq, the precursor of IS. This led to a sense of besiegement by Shiites, which led to radicalization among them. To break this vicious cycle, one should equally oppose Shiite and Sunni sectarians, who demonize each other within a similar mindset: ancient religious bigotry, seeing only the suffering on their side, and identical conspiracy theories that depict the other side as agents of America or Zionism.

The other point is that while criticism about Iran’s “imperialist ambitions” is not misplaced, it is not taking place in a vacuum either. When the world is seen from the eyes of Tehran, Saudi Arabia might look quite “imperialist” as well, with its military involvements in Bahrain and Yemen, all at the expense of Shiites. Turkey’s military presence in Syria and Iraq can also be perceived as such, especially when combined with the romantic rhetoric about “our historical rights” over Mosul.

In other words, sectarianism is a “fitna” (sedition) created not only by a single treacherous party, but rather by all parties involved. So it can be overcome only by moderate voices within all parties who will take a stance against fanatics within their camps. Turkey’s more sensible Islamists have the potential for that; they should not let it go by going with the tide.