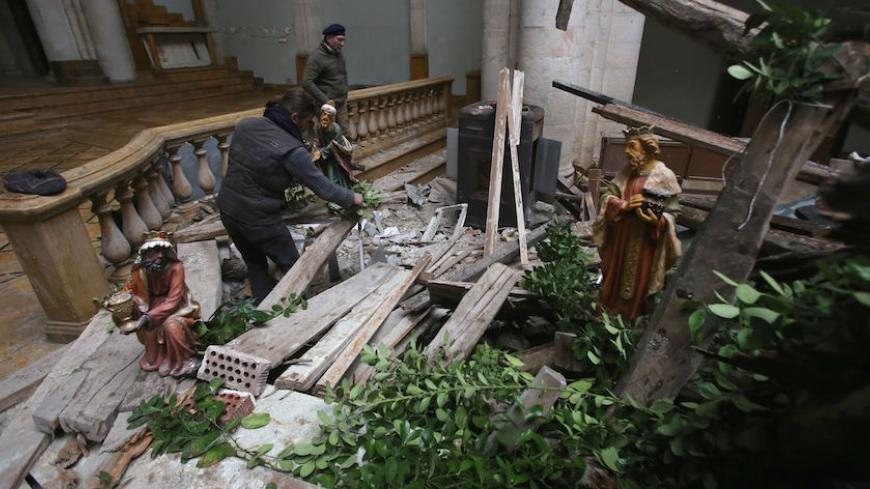 The costs of the war in Aleppo have been catastrophic, but the city’s Christians are seeking inspiration and hope in the Christmas season.

Jesuit Priest Ziad Hilal, who represents Aid to the Church in Need, a Catholic nongovernmental organization in Syria, told The Christian Post, "Despite the harsh conditions the people of Aleppo are enduring, [for both] Christians and Muslims, Christmas brings the hope for peace that we have missed for the last five years. Although many churches have been destroyed in Aleppo, the bells of the other churches will sound and hope they bring us peace," he said.

Patriarch of the Syriac Catholic Church of Antioch Ignatius Joseph III Younan reported that half a million Syrian Christians, a quarter of the community, have fled as a result of the war and 140 churches and monasteries have been abandoned, vandalized or destroyed throughout the country.

In September, Pope Francis said that those responsible for the bombing of civilians in Syria would be “accountable to God.” On Dec. 12, the pope sent a personal letter to Syrian President Bashar al-Assad appealing for “an end to the violence, and the peaceful resolution of hostilities, condemning all forms of extremism and terrorism from whatever quarter they may come.”

The past year has witnessed a continued assault on the region’s Christian communities by the Islamic State (IS) and other terrorist groups. On Dec. 11, IS bombed St. Mark’s Cathedral in Cairo, the largest church in the Middle East, killing 25 and wounding 49. In March, US Secretary of State John Kerry accused IS of genocide against Christians, Yazidis, Shiites and other groups in Iraq and Syria and throughout the Middle East.

Antonio Guterres, the incoming UN secretary-general, recently said that Christians are part of the “DNA of the Middle East.” The hope here is that the Christmas season, and the coming year, will allow Christians, Muslims, Jews and all religions to reclaim their common heritage and work together on a shared vision of the region that is rooted in interfaith tolerance and community. The Christmas celebrations in Aleppo, the first in years, may be a faint, but hopeful, start on this journey.

Syria is source of rising terror in Turkey

Cengiz Candar writes that following the assassination of Russian ambassador to Turkey Andrei Karlov on Dec. 19, “Turkish authorities, without losing a beat, turned to what has become their common measure after every terror incident and blocked Twitter and ordered a media blackout on the issue. This was followed by cliche statements where government officials condemned the terror and said that terrorism could not divert Turkey from its course and that the criminals will be severely punished, and so forth. Officials were quick to declare that the killing of the Russian ambassador was ‘a provocation aiming at undermining the increasing cooperation and good relations between the two countries.’

“Whoever committed the two terror acts in Istanbul and Kayseri and whatever the reason behind the assassination of the ambassador, there is no doubt that Syria is the major source of mounting terror in Turkey.”

Syria has amplified Turkey’s regional isolation and accelerated Ankara’s deepening collaboration with Russia. Candar explains, “There are some in the region who see the escalation of violence in Turkey in terms of redressing the balance of power in Syria. In this regard, Turkey is chosen as the weakest of the involved actors of the Syrian equation. Turkey’s weakness is apparently manifested by its growing dependence on Russia. It appears that the assassination of the Russian ambassador, more than impairing the relationship, may be pushing an embarrassed Turkey more into the Russian fold, at least in the short term.”

Turkey is now a fault line in the Syrian war. “This situation Turkey finds itself in is, more than anything else, of Turkey’s own making,” Candar concludes. “It seems that this ‘impossible war,’ with its many fronts being waged simultaneously, has invited the violence generated in Syria into Turkey. As much as Turkey is getting into the Syrian swamp, the Syrian spillover into Turkey could turn into a flood.”

Semih Idiz writes, “The ‘fall’ of Aleppo has left the staunchly Sunni Islamist support base of President Recep Tayyip Erdogan and the ruling Justice and Development Party (AKP) in Turkey with a deep sense of defeatism and resentment, and it has even prompted calls for revenge to be wreaked on Turkish Alevis.”

Idiz notes, “The fact that Ankara has been noticeably mute over Russian involvement in the defeat of rebel fighters in Aleppo, and all the atrocities this has entailed, does not sit well with all of Erdogan’s supporters. The general tone toward Russia among these supporters has nevertheless been one of restraint. Iran, however, has emerged as the archenemy, and the vitriol against that country is laced with religious and historical imagery that clearly reflects sectarian sentiments. Calls by pro-government opinion-makers in the media for protests outside Iran’s missions in Turkey have also been heeded. This has resulted in a formal protest by Tehran, which indicates that the two countries may be heading for fresh tensions in their already strained ties due to Syria.”

Mustafa Akyol explaines that the rise of anti-Iranian sectarianism in Turkey “did not happen because Turkey’s Sunni Islamists suddenly became sectarian after a theological soul-searching. It happened because of a major political drama they witnessed: the Syrian civil war. From the beginning of the war in spring 2011, both the Turkish government led by Recep Tayyip Erdogan (then prime minister, and now president) and the Islamists in its base focused on the brutality of the Syrian regime over its people — especially the Sunni opposition. When Iran and proxies such as Hezbollah emerged as the biggest protectors of this regime, the anger at Bashar al-Assad and his 'Shabiha' turned into anger against Iran and the broader ‘Shiite-Alevi axis’ in the region.”

“Lately, Iraq added more to this picture,” Akyol adds. “Turkey’s mainstream Islamists have never supported the Islamic State (IS), and rather saw it as an extremist force that puts shame on Islam. Yet at times they ‘understood’ it as a Sunni reaction to the Shiite-dominated government in Baghdad. The latter’s Shiite militia, especially the Popular Mobilization Units, became notorious in the Turkish Islamist media as a force as brutal as IS and a major threat to the Sunnis of Iraq.”