Animosity toward Iran reaches fever pitch in Turkey after Aleppo

Agitation against predominantly Shiite Iran by Sunni Islamists has resulted in calls for attacks on Turkey’s Alevis for vengeance. 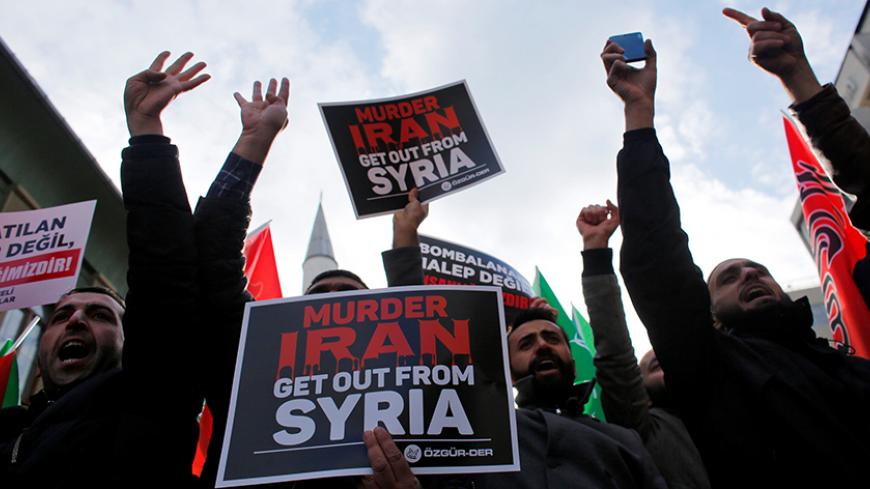 Demonstrators shout slogans during a protest against Iran's role in Aleppo, near the Iranian Consulate in Istanbul, Turkey, Dec. 16, 2016. - REUTERS/Murad Sezer

The “fall” of Aleppo has left the staunchly Sunni Islamist support base of President Recep Tayyip Erdogan and the ruling Justice and Development Party (AKP) in Turkey with a deep sense of defeatism and resentment, and it has even prompted calls for revenge to be wreaked on Turkish Alevis.

Delays over the Turkish-Russian brokered evacuation of Aleppo, and attacks on buses carrying the refugees, reportedly by Iranian-backed Shiite militias, have merely increased the hatred for Iran.

In contrast with this is the discernible attempt to keep Russia out of the line of fire of this loathing, no doubt because Erdogan and the AKP set great store in ties with Moscow in order to counterbalance Turkey’s deteriorating ties with the West.

The fact that Ankara has been noticeably mute over Russian involvement in the defeat of rebel fighters in Aleppo, and all the atrocities this has entailed, does not sit well with all of Erdogan’s supporters. The general tone toward Russia among these supporters has nevertheless been one of restraint.

Iran, however, has emerged as the archenemy, and the vitriol against that country is laced with religious and historical imagery that clearly reflects sectarian sentiments.

Calls by pro-government opinion-makers in the media for protests outside Iran’s missions in Turkey have also been heeded. This has resulted in a formal protest by Tehran, which indicates that the two countries may be heading for fresh tensions in their already strained ties due to Syria.

The government of Prime Minister Binali Yildirim is nevertheless refraining from accusing Iran directly, given that Turkey is currently engaged in a trilateral process involving Russia and Iran aimed at stabilizing the situation in Syria.

Statements following high-level meetings between the two countries — such as the one by Turkish Foreign Minister Mevlut Cavusoglu after his visit to Tehran at the end of November — stress that Turkey and Iran are working together to resolve the Syrian crisis.

The murder of Russian Ambassador Andrei Karlov in Ankara Dec. 19 by an off-duty policeman clearly shows, however, just how agitated Turkey’s Islamists — spurred by Islamist and pro-government opinion-makers — are over Aleppo.

Not surprisingly, Iran’s ambassador to Turkey, as well as Iran's missions and their staff, have been placed under increased protection following the murder of the Russian envoy.

Ankara is keeping channels of dialogue open with Tehran, but it is not hard to imagine that the resentment toward Iran is also shared by government officials and AKP deputies.

Can Acun, an analyst for the Ankara-based Foundation for Political, Economic and Social Research (SETAV), which is close to the AKP, set the tone in a recent interview with the Star daily.

Acun believes that predominantly Shiite Iran is driven by geopolitical ambitions, which aim to not only re-establish the Persian Empire, but to satisfy a 1,500-year-old desire for revenge “after being defeated politically and military by Islam, from which it has never recovered.” His reference to “Islam” should of course be read as “Sunni Islam.”

Ufuk Ulutas, who writes for the pro-government daily Aksam, and who heads the foreign policy research department at SETAV, is more forthright in his choice of words for vilifying Iran.

Iran “has not had its fill of Syrian blood yet,” according to Ulutas, and “is spreading across the whole region like a cancerous cell by using sectarian massacres as a geostrategic instrument.”

Ulutas also believes that Iran is motivated by feelings of revenge for events that happened 1,500 years ago. He says it is pursuing this policy by also using “its agents in the media across the Middle East, including Turkey, who are on its payroll.”

Ulutas appears to be a referring to opponents of Erdogan and the AKP government in Turkey who undoubtedly also include many Alevis. He argues that these agents “pose the greatest threat to the region’s future.”

Yusuf Kaplan, a columnist for the pro-government Yeni Safak, argued that Iran has become the prime instrument of the West, which is trying to break the backbone of the Islamic world by driving Iran into a confrontation with Turkey.

“Iran’s path is a very dangerous one and therefore it must be stopped,” Kaplan said. He maintained, however, that the way to do this “is not by war or falling into the sectarian trap,” but by “intelligent strategies and diplomatic steps.”

Kaplan said, “If Iran can’t be stopped, the region will face an unimaginably bloody and dangerous future.”

Ibrahim Karagul, Yeni Safak’s editor-in-chief, likened Iran to “the Crusaders who occupied Jerusalem and killed all its Muslim inhabitants” in the 11th century, and “the Mongolians who destroyed Baghdad” in the 13th century.

He said Tehran’s aim is not to simply protect the Syrian regime. “It has gotten hold of Iraq, and now wants to grab Syria and extend its borders to the shores of the Mediterranean,” according to Karagul.

Kenan Alpay of the Islamist daily Yeni Akit argued that anyone who defends Iran today is merely “committed to sullying President Erdogan and Islamic sensitivities.”

Alpay also castigated those “who have foolishly latched on to arguments about brotherhood among sects … when Iran has unleashed what is turning into a genocide against Sunnis.” He also encourages demonstrations outside the Iranian Consulate in Istanbul.

This is only a sampling of what is being written in the pro-government Islamist press against Iran. The cold-blooded murder of the Russian ambassador provides an example of what this kind of agitation can lead to.

An example of a much more potentially dangerous outcome was provided by a radical Sunni lecturer named Abdulkadir Sen from the Mus Alparslan University in Mus province in eastern Turkey. In a number of Twitter messages before Assad regained control of Aleppo, Sen openly called for revenge to be wreaked on Turkey’s Alevis, who are cousins of the Syrian Alawites, if the city fell.

Sen’s university promptly suspended him after the opposition brought his tweets to the attention of parliament, and asked the government what steps it planned to take against this kind of provocation.

Deputy Prime Minister Numan Kurtulmus came out later saying they did not approve of the kind of language used by Sen. “We must not fall prey to such games within our borders when we are trying to calm the sectarian conflict beyond our borders,” Kurtulmus said.

Many believe this was a relatively weak response by the government to a dangerous situation that is emerging as a result of the angry goadings by pro-government opinion-makers.

It is also noteworthy, however, that the animosity toward Iran is also forcing some influential pro-government analysts to come up with suggestions they would normally be loath to voice.

Burhanettin Duran, the general coordinator of SETAV, for example, argued in his column in the daily Sabah that in order to prevent further advances by Iran-backed Shiite militias in Syria, Turkey should negotiate with the US and Israel and also maintain a policy that aims to capitalize on differences between Russian and Iranian interests in Syria.

Duran also suggests that after Donald Trump assumes the US presidency, an agreement between Moscow, Washington and Ankara that aims to counter Iran’s expansionist aims is not as outlandish as it sounds.