AKP base divided on Turkey's vote to join coalition

Pro-government commentators have raised questions over Turkey’s participation in a US-led coalition, while the latest polls show Turks are split on what their country's role should be in fighting the Islamic state. 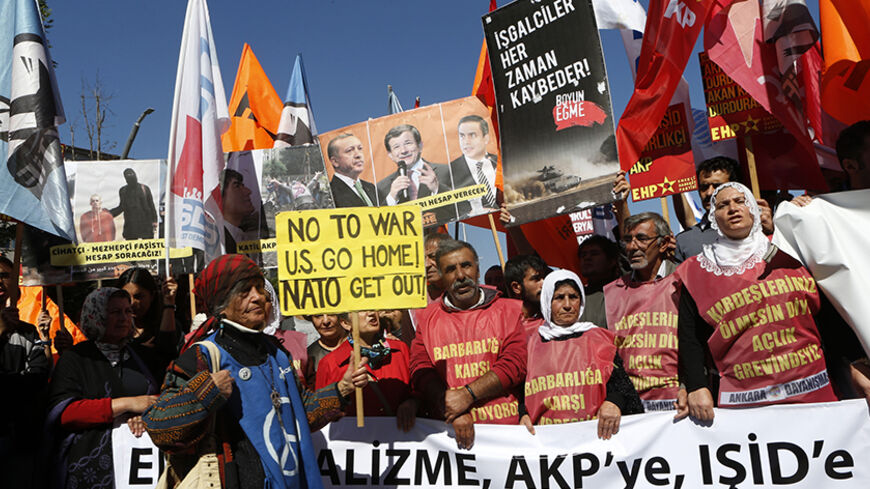 Protesters demonstrate in front of the Turkish parliament in Ankara, hours before debate on a motion which would allow the government to authorize cross-border military incursions against Islamic State fighters in Syria and Iraq, and allow coalition forces to use Turkish territory, Oct. 2, 2014. - REUTERS/Umit Bektas

A public opinion survey by the Turkish Metropoll polling company reveals that although an overwhelming majority of Turks are opposed to the Islamic State (IS), 52% would still prefer Turkey not get actively involved in the US-led coalition against it.

Ankara, however, is poised to do just that after the government received the mandate it sought from parliament, on Oct. 2, which not only enables the Turkish military to enter Iraq or Syria — if and when it deems necessary — but also allows allied forces to enter Turkey to fight IS.

It was noteworthy that deputies from the ruling Justice and Development Party (AKP), except those that are currently in Mecca for the hajj, should have voted overwhelmingly for the mandate. This contrasts with the situation in 2003 when many AKP deputies voted against a similar bill, submitted by their own government, which would have allowed the United States to use Turkish territory to invade Iraq.

That bill was defeated by one vote as a result of the negative votes of these deputies. Party whips ensured the AKP was not faced with a similar situation this time, which would have also posed a major embarrassment for President Recep Tayyip Erdogan and Prime Minister Ahmet Davutoglu.

There are nevertheless questions as to how enthusiastic the AKP’s grassroots conservative Islamic supporters are about this mandate, and that Turkey is now part of a US-led coalition. The inbred belief among Turkey’s conservative masses is that such alliances always have an anti-Islamic agenda, even if they come under the guise of “combating terrorism,” or “getting rid of dictators to make way for democracy.”

The quandary for many Turkish Muslims, however, is that Erdogan, who is a cherished leader for many of them, has vowed to join the US-led anti-IS coalition. This has left many AKP supporters of two minds, which is also reflected in the views of pro-government opinion-makers.

Under normal circumstances, pro-government columnists and analysts would rally unquestioningly behind the government on just about any issue, given the deep social and political divisions that have emerged among Turks along ideological lines.

A gleaning of the pro-government media, however, shows that there are serious concerns as to what Turkey is getting into by participating in this coalition against IS.

A shared concern is that Turkey’s image among the region’s Islamic masses will be severely harmed because of this. There are also concerns that Arab public opinion, which became more favorably disposed toward Turkey after the Islamist Erdogan came to power, will turn against Turkey.

Ibrahim Karagul, the editor-in-chief of Yeni Safak, a prominent Islamist and pro-AKP daily, for example warned in his column on Oct. 1 that it was important for Ankara to ensure that any military operation in Iraq or Syria by the Turkish military is not misinterpreted in the Arab world.

Karagul, a staunch supporter of Erdogan and the AKP, said these operations could be seen as acts of invasion and occupation in Arab minds and create a negative image of Turkey, a possibility that he said the government should take very seriously.

“Every intervention in this region by coalitions led by the United States or the West has resulted in serious reactions and, whatever the reasoning behind them, was met with hatred,” said Karagul, who has never made a secret of his own antipathy for the West.

Due to his affinity for the AKP he nevertheless gave the government the benefit of the doubt with regard to Ankara’s joining the fight against IS, arguing that this was necessary because of the negative fallout Turkey was experiencing from the crises in Iraq and Syria.

Ali Bulac, a prominent Islamist intellectual and columnist for Zaman, however, was more direct in his column on Oct. 2, and starkly revealed the concerns that ultimately lay behind Karagul’s remarks. A brief clarification is needed here, though.

Zaman supported the AKP in the past, but has turned against it because of the fight between Erdogan and the Islamist Fethullah Gulen group, which owns the paper, and which Erdogan accuses of trying to topple the AKP government.

Yeni Safak and Zaman are bitter rivals today as a result of this. It is nevertheless noteworthy that Karagul and Bulac share the same Islamist concerns even if they express them in different ways.

Pointing out that we are in the throes of a war “where Muslims are slaughtering Muslims” Bulac wrote that there is an ongoing effort “to spoil the fabric of Islamic societies and sow the seeds of ethnic and sectarian division.” He went on to claim Turkey is being primed as the most important element of the ground operation being planned in this regard.

“Turkey’s participation in an operation under the command of the US and its sending troops to Syria will not please the Syrian regime, the Kurds or Arabs. Sunni Arabs will also be displeased. The fact that their kings and emirs have fallen in line with the United States does not mean that Arabs are happy with this.”

Kenan Alpay, a columnist for the hard-line Islamist daily Akit — which also supports Erdogan and the AKP — dwelled on the same theme in his commentary on Oct. 2.

“The basic concern of the West is the wellbeing of despotic regimes in the region and the dissolution of Islamic movements. Turkey can not be a part of an international system that aims to dissolve all Islamic movements from the Muslim Brotherhood to Hamas, from the Islamic movements in Libya and Tunisia to the Taliban in Afghanistan, and the Jamaat-e-Islami in Bangladesh.”

Writing in the pro-government daily Star, Ibrahim Kiras, another widely read conservative commentator, wrote much the same, albeit in a gentler tone, on Oct. 3.

“There are doubts that the aim is to fight against all Islamic groups in Syria under the guise of combating IS, and therefore [there is] opposition [to] this operation. On the other hand, even if the only target was IS, there are concerns that Turkey’s participation in a military operation with Western forces will do irreparable damage to our image and reputation in the region. I am also of this view,” Kiras wrote.

These are only a few examples of the views of conservative and Islamist opinion-makers, and there are others that have appeared in the past few days. They show that Erdogan and Davutoglu will have to tread a very cautious path in the coming days, weeks and months as they cooperate with the United States against IS, to allay concerns being expressed by their natural supporters.

This could be the reason why both Erdogan and Davutoglu keep referring to the need for Syria’s President Bashar al-Assad and his regime to be ousted, and why the text of the mandate accepted in parliament on Oct. 2 mentions IS only once, while it refers to the Syrian regime multiple times.

Assad has become a figure of hate for Turkish Islamists, so this could be an attempt at deflecting attention by trying to convince AKP supporters that what the government is aiming for here is to get rid of the Syrian regime, while IS merely represents a side issue that can be handled after Assad is gone.

If that is the case, Assad’s proven staying power and the unexpected courses the fight against IS takes, could leave the government facing embarrassing situations down the line with its supporters as events unfold.