Turks blame US, Iran for encouraging Baghdad against Ankara

Turkey's opinion-makers think Iraq isn’t acting alone in its calls for Turkish troops to leave a camp near Mosul. 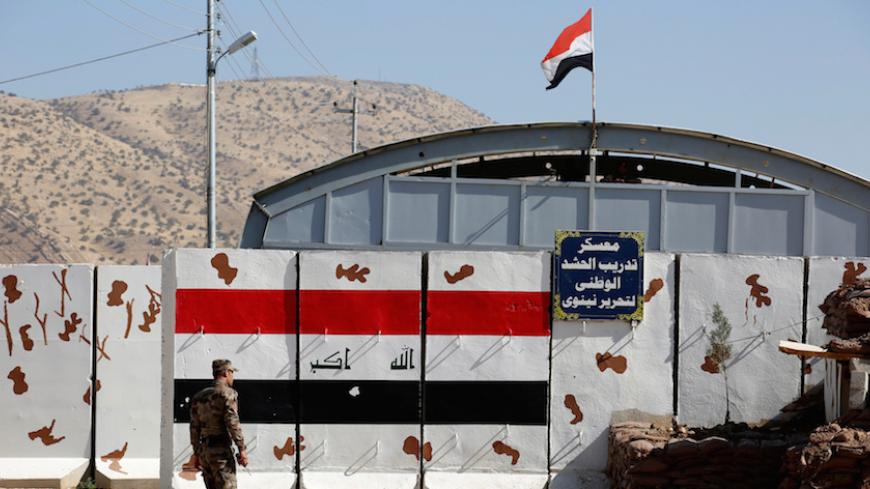 Iraqi Prime Minister Haider al-Abadi’s demand that Turkish troops stationed in the Bashiqa camp near Mosul leave Iraq has riled Turks of all shades, regardless of whether they support President Recep Tayyip Erdogan and the ruling Justice and Development Party or not.

The blame for Baghdad’s position, however, is being placed on the United States, which is said to be inciting Abadi against Turkey. Iran is also accused of using the Abadi government to keep Turkey away from a Mosul operation.

According to some, the aim is to help anti-Turkish terrorist groups and ensure that oil from northern Iraq does not flow into Turkey, while others argue that there is an effort to put up a Shiite belt around Turkey.

Given the closeness of some of the opinion-makers to the government, it is not difficult to conjecture that they reflect some of the thinking in official circles. If that is indeed the case, it means Turkey’s ties with the United States and Iran will face more strains as events in Iraq and Syria unfold.

The reason why nationalist Turks are overly sensitive about Mosul is that the “Turkish National Pact,” as defined by those prosecuting the war of liberation during 1919-1922, included Mosul within Turkey’s borders. They believe Turkey was cheated out of Mosul by Britain at the time and have cast the United States in Britain’s role today.

Islamist Turks, on the other hand, consider Mosul to be a Sunni city and see a plot aimed at ridding it of its Sunni population in favor of Shiites. In his address to parliament recently, Erdogan referred to an effort to alter Mosul’s demographic composition and said Turkey would do its utmost to prevent this.

During an interview with the Saudi Rotana TV two days later, Erdogan spelled it out more clearly and said Mosul should remain a Sunni city after being cleared of the Islamic State (IS).

One of the first things the Turkish parliament did Oct. 1, after its summer recess, was to extend by a year the mandate for military operations in Iraq and Syria. Iraq’s parliament responded by branding Turkish troops in Bashiqa as occupiers and demanded their withdrawal.

Turkey says its forces are in Bashiqa on invitation to train Kurdish peshmerga and other fighters against IS. Baghdad denies this.

Abadi also called on Turkey to withdraw its forces and prevent a regional war. This was rejected by Ankara. Abadi was cited on Oct. 10 as telling the Al Sumaria daily that Turkey won’t be allowed to participate in the Mosul operation, and he was cited as advising Turkish forces in Iraq “not to move from where they are.”

Washington says any international force in Iraq should have Baghdad’s consent. The US position has been interpreted in Turkey as proof that it is goading Baghdad against Ankara.

According to Abdulkadir Selvi, a columnist for the daily Hurriyet who is known to be close to government circles, it is indicative that Washington prefers to cooperate with Shiite Iran and the Tehran-backed Kurdistan Patriotic Union (PUK) attached to Jalal Talabani to liberate Mosul.

“The US prefers to conduct its operation against Sunni Mosul with Shiite Iran. It also wants to infiltrate the Kurdistan Workers Party (PKK) [into the region] under the shroud of the PUK,” Selvi argued in his column. Turkey and the United States have both declared the PKK a terrorist organization.

Selvi went on to claim that the United States was aiming to undermine Massoud Barzani, the president of the Kurdistan Regional Government (KRG), which has backed Ankara in the Bashiqa dispute, and which is cooperating with Turkey in the energy field.

“They are disturbed by the fact that oil from northern Iraq is flowing into Turkey. The concern is not Daesh [an alternative name for IS]. The long-term plan is to open up northern Iraq to the PKK, as was done in Syria, and to take the control of energy lines from Barzani and put it under PKK dominance,” Selvi reasoned.

Thinking along the same lines, Nuri Elibol from the pro-government daily Turkiye believes that the energy deals Ankara signed with the KRG for sending northern Iraqi oil to world markets have deeply disturbed the United States and Great Britain.

“The plan is to transport oil obtained from Mosul, Kirkuk and other points to the Mediterranean not through Turkey but through Syria,” Elibol said. He argued that this plan was disrupted by Turkey’s recent military incursion into Syria, and he said this is the reason behind the effort to prevent Turkey from participating in the liberation of Mosul.

Fikret Bila, a secularist and nationalist commentator for daily Hurriyet, on the other hand, argues that Turkey is trying to confront terrorism from IS, as well as the PKK and its extensions in Syria — the Democratic Union Party (PYD) and the People’s Protection Units (YPG) — but is being obstructed by the United States and its Western allies.

“The US, which is supporting the PKK-PYD-YPG in Syria against Turkey, is trying to keep forces trained by Turkey out of the Mosul operation and to expel them from the region altogether. It is guiding Baghdad to this end together with Britain,” Bila said.

Arguing that international law gives Turkey the right to defend itself, Bila said those who oppose Ankara’s military presence in Iraq and who support terrorist organizations attacking Turkey were the ones violating international law.

Ibrahim Karagul, the editor of the Islamist daily Yeni Safak, who is known for his vitriolic stand against the West, also sees an effort to encircle Turkey with a “corridor of terror” in Syria and to undermine its position in Iraq.

“The threats from Baghdad aimed at Ankara have nothing to do with Iraq. This crisis is not a Turkey-Iraq crisis because there is no administration in Baghdad. Iraq, where dozens of countries are presently, has no sovereignty,” Karagul said. A large number of countries have representation in Iraq as part of an international effort to counter IS.

She argues that while Turkey is blamed for maintaining sectarian policies, it is Iran that is using the sectarian card to develop a Shiite hinterland in the region.

Whatever the merits or demerits of these arguments, the one question not being asked by these opinion-makers is whether the bombastic statements and confused policies of Turkey regarding regional crises in recent years have something to do with the difficult and ineffective situation Ankara finds itself in today, when its vital security interests are at stake.