Will Turkish-Iraqi alliance against Kurds hold?

Ankara is happy that the Baghdad government has regained control over Kirkuk, but questions remain whether Turkey and Iraq can agree on the city’s future status. 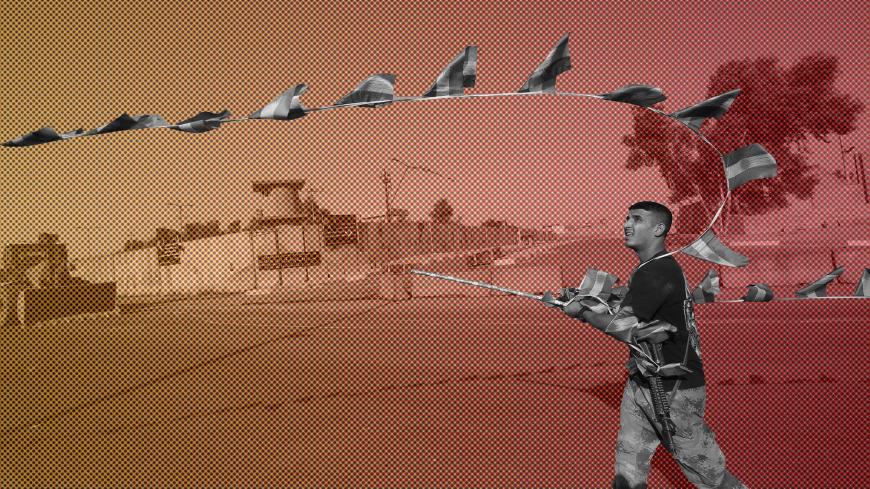 An Iraqi forces member takes down Kurdish flags as they advance toward the center of Kirkuk during an operation against Kurdish fighters, Kirkuk, Iraq, Oct. 16, 2017. - AHMAD AL-RUBAYE/AFP/Getty Images

Events show again how slippery a foundation politics in the Middle East sit on. A year ago I argued in this column that the Kurdistan Regional Government (KRG) would remain Turkey’s main ally in Iraq for the foreseeable future.

Ankara and Baghdad were trading insults then over Iraq’s categorical refusal to allow Turkey to participate in the liberation of Mosul from the Islamic State (IS). Baghdad was also demanding that “uninvited” Turkish troops at the Bashiqa camp near Mosul be withdrawn.

The KRG, however, provided the cover for the Turkish military presence in Bashiqa. Ankara maintained at the time that it was the Iraqi Kurds who wanted Turkish troops in Iraq to train peshmerga fighters against IS.

“As far as Bashiqa is concerned, you know that from the start … the [Massoud] Barzani administration wanted Turkish support to train local forces for the liberation of Mosul. This is clear and not open to dispute,” Deputy Prime Minister Numan Kurtulmus told reporters after the Iraqi parliament demanded Turkish withdrawal.

Meanwhile, President Recep Tayyip Erdogan, angered by Baghdad’s refusal to let Turkey participate in the liberation of Mosul, was berating Iraqi Prime Minister Haider al-Abadi. Calling Abadi his subordinate and telling him to “know [his] place,” Erdogan insisted that Turkey did not need anyone’s permission to participate in the Mosul operation. In the end, Abadi carried the day in Mosul, with US support, while Turkey refused to pull its forces back from Bashiqa, which remains a sore point between the sides.

KRG President Massoud Barzani’s gamble with his independence referendum, however, has changed everything, forcing Turkey and Iraq into an alliance against the KRG — a match that doesn’t look like it was made in heaven.

Officially, Ankara is happy to see the KRG lose much of Kirkuk and has offered Baghdad what assistance it needs. It is also happy that tens of thousands of Kurds who had resettled in the oil rich city after the US occupation in 2003 are fleeing now.

Ankara argues that the resettlement of Kurds in Kirkuk was designed to artificially change the demography of the city, which it says is a Turkmen city historically. Its strained ties with Baghdad, however, ensured that it did not pursue this matter with the KRG in recent years. It is not certain, though, that Baghdad’s taking control of the city with an operation spearheaded by the Iranian-backed Popular Mobilization Units (PMU) will result in the administration Turkey wants to see in Kirkuk.

There is also the problem of the PMU, which is a Shiite terrorist group in Ankara’s eyes. It was not long ago that the pro-government analysts were writing that this group “was as bad as IS.” When the PMU was preparing to take Tal Afar from IS in 2016, Erdogan warned that if it terrorized the city, which he said was “totally Turkmen,” Turkey would step in. Ankara did not want this group to be part of the operation to liberate Mosul either, but it failed to prevent this.

The PMU, for its part, warned Turkey of dire consequences if it refused to withdraw its troops from Bashiqa, referring to the Turkish military presence as “occupiers.”

Such serious differences between Baghdad and Ankara appear to have been momentarily shelved as the two countries try now to coordinate their joint actions against the KRG. The future status of Kirkuk, however, is likely to remain a bone of contention.

Agitated by the Nationalist Movement Party (MHP) — which is close to the ruling Justice and Development Party (AKP) — Turkish nationalists regard Kirkuk to be Turkey’s by birthright. The MHP says thousands of its partisans are ready to fight and die for the city, which, it argues, was illegally wrested from Turkey after World War I.

Such serious differences between Baghdad and Ankara appear to have been momentarily shelved as the two countries try now to coordinate their joint actions against the KRG.

This narrative is likely to have fueled suspicions in Baghdad about Turkey’s ultimate intentions in Iraq. Most diplomats in Ankara believe that Baghdad is unlikely to let Ankara have a say over the future of Kirkuk with such clamoring in Turkey.

Article 140 of the Iraqi Constitution adopted in 2005 calls for a referendum to determine whether Kirkuk’s citizens want to join the Kurdistan region. However, much has happened since then demographically, politically and militarily, making it difficult to hold this referendum.

A Western diplomat speaking to Al-Monitor off the record due to his sensitive position believes there will be little incentive now for the central government to share Kirkuk’s administration.

“With the Kurds dispatched from Kirkuk, there is a good chance that the central government, which is predominantly Shiite, will take full control of the city and its oil facilities and refuse to share power,” the diplomat, who knows the region well, said. “There will also be no reason for the central government to go out of its way to accommodate Sunni Turkmen, especially those Turkmen groups that have been supported by Ankara politically and financially for years.”

“Iran, on the other hand, is better poised than Turkey with regard to the future of Kirkuk,” the diplomat said.

Meanwhile, unresolved issues between Ankara and Baghdad, such as the Turkish military presence in Bashiqa, are said to have forced Prime Minister Binali Yildirim to cancel his expected visit to Baghdad.

Ankara’s Kurdish phobia, which has been amplified exponentially by the KRG’s independence referendum, may be preventing official circles from airing their concerns regarding the Abadi government. There are, however, analysts, some close to the government, who are warning that while Turkey may be happy that the Kurds in Kirkuk are being rolled back, the final outcome may not please Ankara.

Ufuk Ulutas, the director of foreign policy at the government-sponsored Political, Economic and Social Research Foundation on the other hand lamented the headache Barzani has caused Turkey. In an article for the pro-government daily Aksam, Ulutas said Barzani had thrown the Kurds into an open-ended conflict with his referendum. He added that Barzani had also increased Iran’s and the PMU’s influence in Iraq, which, he said “is not good for Turkey.”

Ulutas also said the Kurdistan Workers Party (PKK) had also gained a historic opportunity to increase its influence in northern Iraq, thanks to Barzani.

Retired Brig. Gen. Naim Baburoglu agreed with those who say Turkey’s influence in Kirkuk will be limited. He believes, however, that issues like the PMU in Kirkuk and the city’s future are of secondary importance for Turkey.

“Developments in Iraq are not independent of developments in Syria, where Kurds have also gained ground with US and Russian backing,” Baburoglu told Al-Monitor. “Turkey supports Iraq’s territorial integrity, which the Kurdish administration endangered. The PKK also used the turmoil to strengthen its position in northern Iraq.”

“It is therefore the lesser evil for Turkey to have the central government controlling Kirkuk, in the name of preserving Iraq’s territorial integrity against Kurdish aspirations,” he added. Baburoglu underlined that independence for the Kurds remains the principal threat for Turkey.