Iran and Iraq show no inclination to join Turkey's potential operations against the Kurdistan Workers Party. 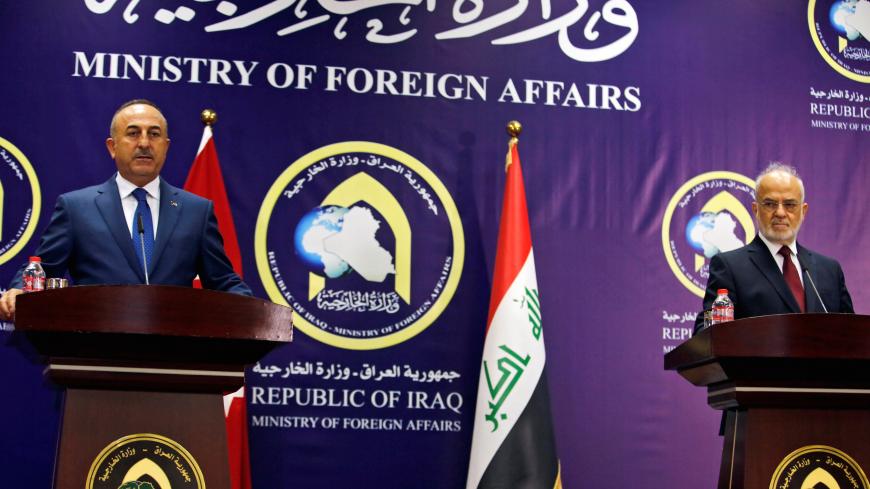 Since Turkey concluded Operation Euphrates Shield — its military campaign against the Islamic State (IS) in northern Syria — Ankara has been building expectations that it will make major military moves in Iraq and Syria. Its hoped-for allies, however, do not seem to share those plans, despite the media's enthusiasm.

But Turkey’s pro-government media did not hesitate to predict trilateral operations among Turkey, Iraq and Iran after Turkish Foreign Minister Mevlut Cavusoglu visited Baghdad this week. The media even quoted undisclosed Iraqi officials as saying, “We are included also.”

It is obvious that Turkey has been trying to build some sort of partnership with Iraq and also Syria against the PKK, while hoping to gain the understanding of the United States and Russia. However, a Turkish diplomatic source well informed about the meeting in Baghdad told Al-Monitor there was no discussion of a joint operation.

While many people thought Cavusoglu would have been a frequent visitor to Iraq to deal with an abundance of issues between the two countries, his Aug. 23 visit was his first. He had four key issues on his agenda:

The source, who did not want to be identified, confirmed that Turkey did voice its objections to the PKK's presence in the Qandil region, which is theoretically under the control of the KRG. There is nothing the Iraqi army can do in that region, which has been out of its control for decades.

Sinjar, on the other hand, is a relatively fresh thorn in Turkey's side. In the Baghdad meeting, Turkey emphasized that intervention is essential before the situation in Sinjar, where PKK-oriented Yazidis have declared democratic autonomy, becomes permanent. Turkish officials said the Iraqi army and Kurdish peshmerga can control the area, but again, there was no proposal for a joint operation.

Baghdad’s approach to the issue is different. It doesn't share Turkey’s sensitivity to Sinjar. Sinjar is legally in the administrative boundaries of Baghdad-controlled Mosul province, but since the 2003 American invasion, it has been under peshmerga control. After 2014, Yazidi defense forces organized by the PKK to combat IS became partners in controlling the area. Despite Turkey’s protests, the Baghdad government considered Yazidi defense forces to be identical to the Popular Mobilization Units and is paying their salaries. As such, the Yazidis did not totally sever their links with Baghdad, which sees them as a counterweight to the peshmerga and the Kurdistan Democratic Party of Massoud Barzani. That is why Baghdad can afford to ignore Turkey’s warnings of a "second Qandil," or PKK stronghold, emerging at Sinjar.

Turkey, which could not be as influential as it wanted to be in the liberation of Mosul, now links its military presence in Bashiqa to the PKK's presence in Sinjar. In his meetings, Cavusoglu insisted Turkey has no designs against Iraqi territorial integrity and sovereignty, but has to maintain its troops at Bashiqa until the situation at Sinjar changes. He repeated Prime Minister Binali Yildirim’s remarks from January that the two countries agreed to seek a joint solution to the Bashiqa affair and hoped for concrete steps in the coming days. The Iraqi government, while trying to cope with vital issues, such as the war with IS and the pending Kurdish referendum, wants to avoid any escalation of tensions with Turkey, but keeps reminding Turkey that the Bashiqa issue remains an obstruction to improving relations between the two countries.

Cavusoglu, upon concluding his business in Baghdad, traveled to the KRG capital, Erbil, and met with Barzani.

According to Al-Monitor’s source, the message Turkey delivered to Barzani was as such: “We are not saying that the Kurds are unjustified; there are some justifiable demands. But independence is not the right action. Turkey can help in solving the problems the Kurds have with the Baghdad government. We can influence Baghdad on budget disagreements and other issues.”

Despite the referendum, there has been no real action taken toward independence for Kurdistan. Therefore, Ankara prefers to interpret the project as a “Barzani tactic to strengthen his hand.” In the Aug. 23 meeting with Barzani, Turkey insisted the Kurds cancel the referendum but, as usual, did not announce any measures that could be construed as potential sanctions against the KRG.