Turkey, Iran and Iraq have closed ranks over the independence vote in Iraqi Kurdistan, but how long can their partnership survive? 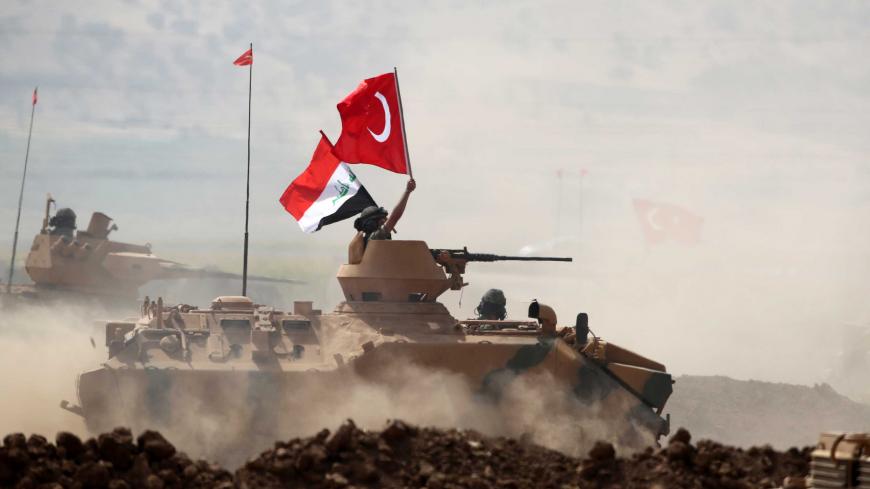 Turkish and Iraqi troops are pictured during a joint military exercise near the Turkish-Iraqi border in Silopi, Turkey, Sept. 26, 2017. - REUTERS/Umit Bektas

Whether Iraqi Kurdistan’s independence vote leads to statehood remains to be seen, but the referendum has led to other impressive things. Ankara today stands together with Tehran and Baghdad — the same neighbors it was slamming for “Persian expansionism” and sectarian policies yesterday. The trilateral front, driven by a shared fear of partition, is hailed as a new Saadabad Pact by some in the Turkish media — a reference to the 1937 nonaggression treaty between the three neighbors plus Afghanistan.

Iraqi Prime Minister Haider al-Abadi is now Ankara’s No. 1 partner against Iraqi Kurdistan, less than a year after he sparred with President Recep Tayyip Erdogan over the Turkish military presence near Mosul and Abadi was told to “know his place” because he was below Erdogan’s “quality” and “level.”

A symbolic number of Iraqi troops joined the Turkish army this week in military drills at the border with Iraqi Kurdistan, with soldiers waving Turkish and Iraqi flags from the tanks. Erdogan, meanwhile, sought to show how wrathful a big state could be, threatening to starve the Iraqi Kurds. “As soon as we start implementing sanctions, [they] will be stuck. Once we turn off the [oil pipeline] valve, it will be over — no income whatsoever for them,” Erdogan said Sept. 26. “When trucks stop [shipping goods] to northern Iraq, they will be left without food and clothing.”

Besides threats to close the border, Turkey’s hitherto contribution to the new partnership includes the suspension of commercial flights to Erbil and Sulaimaniyah at the behest of Baghdad, cutting dialogue with Massoud Barzani’s Kurdistan Regional Government (KRG), a snub to Omer Merani, the Ankara envoy of Barzani’s Kurdistan Democratic Party (KDP), and the removal of three Iraqi Kurdish TV channels from a Turkish satellite.

Ankara, which had signed a 50-year oil deal with the KRG, bypassing Baghdad, has now promised to deal only with Baghdad on crude oil exports. On possible military action, Foreign Minister Mevlut Cavusoglu has spoken of two possible cases — if Iraq requests Turkey’s support and if Iraq’s Turkmen community comes under threat.

Looking beyond the measures and threats, the rapprochement between Turkey, Iran and Iraq raises a fundamental question on how sound this partnership is and how long it can survive. Given the three countries’ past records and their prevailing conditions, sustaining the current coordination seems difficult. A number of factors are likely to function as a brake mechanism mitigating the tensions with the KRG.

To start with, during the course of the Arab uprisings, the KRG emerged as a unique neighbor with an open market for Turkey as Ankara came to loggerheads with many in the neighborhood. More than 4,000 Turkish companies are doing business in Iraqi Kurdistan. The region has become quite important for Turkey’s Kurdish-majority southeastern provinces, which are its immediate neighbors. In other words, economic sanctions would certainly hurt the Iraqi Kurds but would mean big losses for Turkey as well, as evidenced by the economy minister’s call for caution. “Talk of economic embargos is a dangerous rhetoric. When you put embargoes into place, you stop doing business,” Economy Minister Nihat Zeybekci said in an interview this week. “Some may say, ‘You’re still talking about trade, when Mosul and Kirkuk are sacred causes to us,’ but trade is what I’m responsible for. We’re talking of [some] $9 billion in trade here.” Yet the final say will be, no doubt, with Erdogan.

Second, the regional rivalry between Turkey and Iran could take them back to jostling for influence over Iraqi Kurdistan. Back in 2011, the two countries had agreed to confront jointly a “common enemy” — the armed militants of the Kurdistan Workers Party (PKK) and its Iranian extension, the Party for a Free Life in Kurdistan (PJAK). While Iran launched operations against PJAK militants in the Qandil Mountains in northern Iraq, Turkey opted not to fight the PKK, hoping to advance a peace process. Tehran, it seems, has taken note of this episode, for it was quick to deny any plan for joint action against the PKK, which Erdogan said was “always on the agenda” after the Iranian army chief paid a rare visit in August.

Unlike the PKK, Iraqi Kurdistan is considered a legitimate interlocutor and business partner, which could ultimately lead Turkey and Iran to make do with a policy of “controlled anger” as both would be wary of losing the KRG to one another. At present, Iranian goods dominate the market in regions close to the Iranian border, and Turkish goods dominate areas close to the Turkish border. Due to this economic competition, teaming up in enmity against the KRG could become unsustainable. In Iran, too, the government is being advised to think twice on the issue of sanctions.

For years, void-filling tactics have shaped the Turkish-Iranian rivalry in the region. While losing ground on the Iraqi scene, Turkey had the clout to counterbalance Iran in Kurdistan. Ankara collaborated with the KDP and Tehran with the Patriotic Union of Kurdistan. For the Kurds, the equilibrium meant a room to maneuver between the two sides. No matter how things have changed in recent days, this sense of balance remains important.

Treating Kurdistan as a hostile entity is also likely to open room for unwelcome actors such as Israel, a prospect that Iran and Turkey cannot disregard forever.

Another factor is the PKK’s potential expansion in the region. Boosted by the Kurdish autonomy drive in northern Syria and its defense of Sinjar’s Yazidis against the Islamic State (IS), the PKK stands a chance of gaining a greater foothold in Iraqi Kurdistan. Existing power balances and traditional politics based on kinship ties prevent the PKK from getting mass popular support, but things may change if sanctions weaken Barzani’s administration. The PKK has been organizing silently in Kirkuk lately, which Ankara must have noted. According to Al-Monitor’s sources in Kirkuk, the PKK’s presence there is no more than 500 people, but the sympathy net might expand in the event of turmoil. Hence, a scenario where the PKK fills a vacuum in the area should be also factored in as a counterweight in the calculations.

On the Iraqi leg, Ankara’s partnership with Baghdad rests on fragile ground, marked by a deep confidence gap. Many Iraqis believe Turkey backed IS and bet on the Sunni card in the days when Mosul was falling. Ankara’s oil deal with the KRG, its refusal to withdraw its troops from Bashiqa, Erdogan’s opposition to the entry of Shiite militias into Mosul and his harsh comments about them have all had a very negative impact on the Iraqi view of Turkey. Unless the mistrust is scaled down, the Ankara-Baghdad dialogue could hardly proceed on a healthy ground, and bilateral ties could easily go sour on some other issue down the road.

Finally, Washington’s attitude in the post-referendum process could deter Turkey in particular. Washington wanted the referendum postponed until after the 2018 elections in Iraq, but failed to persuade Barzani. Yet this does not mean that the United States has abandoned its policy of protecting and backing Iraqi Kurdistan. No one really expects it to allow moves that could lead to the KRG’s collapse.

The Russian factor could also force Turkey and Iran to reconsider hostile policies against the KRG. Russia has entered the game with energy deals with the KRG, and its approach has diverged from that of Turkey and Iran.

Despite all those counterweights and brake mechanisms, the sweeping Turkish and Iranian fury against Kurdish statehood makes it difficult to predict what will happen down the road. It seems, however, that Barzani will refrain from going a step further. He is expected to put on his pragmatist’s hat and embark on efforts to soothe the anger of his neighbors, which has haunted Kurdistan for decades.

Correction: October 4, 2017. An earlier version of this article misidentified Nihat Zeybekci as an economist. He is Economy Minister.