Some Turks blame US for Kurdish independence vote

Sources close to Turkey's ruling party say the United States secretly supports Iraqi Kurds' bid for independence as part of US plans for a "second Israel" in the region. 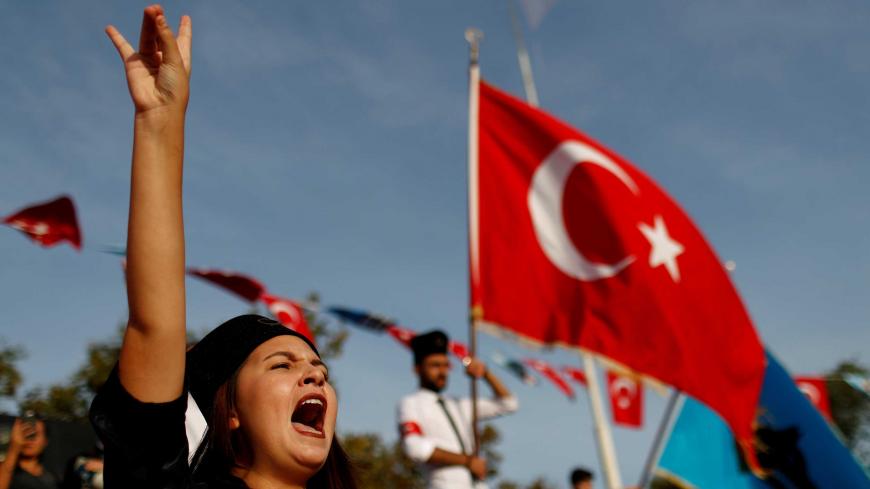 Turkish President Recep Tayyip Erdogan returned happy from his talks with US President Donald Trump in New York last week on the sidelines of the UN General Assembly meeting, even though they resolved little regarding issues that have strained ties between the two countries in Syria and Iraq.

This, however, hasn't prevented Erdogan’s supporters — and, no doubt, many government officials, including Erdogan’s own advisers — from seeing the United States as the hidden hand behind the independence referendum held Sept. 25 by the Kurdistan Regional Government (KRG) in Erbil, Iraq. Results of the vote are expected Sept. 27. Turnout was high and most observers believe the referendum will pass handily. Meanwhile, Iraq has demanded control of KRG airports, threatening otherwise to impose a flight ban.

Turkey's frustration increased with Erbil’s refusal to heed Turkey's dire warnings ahead of the referendum, including Ankara's barely veiled threat that if the vote were held, it might be a reason to go to war.

Washington’s condemnation of the referendum, on the other hand, means little to Erdogan backers, who see it as a mere diplomatic ploy. These quarters believe KRG President Massoud Barzani wouldn't have had the courage to go up against so much international opposition to his referendum if he hadn't received secret US assurances.

Many nationalists in Turkey who oppose Erdogan and his ruling Justice and Development Party (AKP) are also convinced that the United States publicly opposed the referendum to divert attention from its "true" intention. They believe the referendum is actually part of Washington’s supposed long-standing desire to establish “a second Israel” in the region. Israel’s support for the KRG referendum has fed into this perception.

Nationalists are particularly angry that the KRG has included the oil-rich Iraqi city of Kirkuk — which they believe is traditionally Turkmen — in the referendum, and are calling on the Turkish army to move in and wrest it from the Kurds.

Hurriyet columnist Abdulkadir Selvi, an avid Erdogan supporter with close AKP ties, said the referendum can only be understood “if looked at from the perspective of Washington, London and Tel Aviv.”

Arguing in his column that “Barzani’s referendum decision is part of the United States’ regional vision,” Selvi said areas controlled in Syria by the US-backed Kurdish Democratic Union Party (PYD), and its military wing, the People’s Protection Units (YPG), “are next in line in the independence chain.”

Ankara says the PYD and YPG are Kurdish terrorist groups, and opposes any suggestion of regional autonomy for them in Syria. Turkey is concerned that gains by the Kurds in Syria and Iraq will encourage its own restive Kurds.

Turkey’s problem, however, is that it has failed to prevent not just Washington but also Moscow from supporting the PYD and the YPG. Moscow, to Turkey’s annoyance, believes that these groups should also have a say in a settlement of Syria's civil war.

Ankara relies heavily on its ties with Moscow at the moment to counterbalance its deteriorating ties with the West, and is therefore reluctant to criticize Russia over this issue. Erdogan is due to host President Vladimir Putin on Sept. 28 in Ankara, and developments in Iraq and Syria are expected to be high on the agenda.

Despite these friendly overtures with Moscow, Selvi said Ankara believes there is a secret deal among the United States, Russia and the Kurds to partition Syria. Selvi says this would make it hard for Turkey to intervene militarily against the Kurds. Nevertheless, there is a lot of official saber-rattling from Ankara, as nationalist quarters clamor for the Turkish military to move into Iraq and Syria, with scant consideration for potential consequences. Turkey’s ongoing military maneuvers along the border with northern Iraq and reinforcements on its border with Syria have encouraged them in this respect.

There is a lot of official saber rattling from Ankara, as nationalist quarters clamor for the Turkish military to move into Iraq and Syria.

There are voices, however, that caution against any intervention. Ertugrul Ozkok, a prominent liberal columnist for Hurriyet, believes an intervention would backfire on Turkey, leaving it looking like an Ottoman invader chasing after pan-Turkish dreams.

“Turkey’s image in the world and in the Arab world is at its nadir. … We could all of a sudden find that the world is on Barzani’s side and opposed to Turkey,” Ozkok wrote in his column before the referendum.

“Let’s not forget that our Syria policy has also hit its lowest point and been defeated on all fronts. We have lost our power of deterrence,” he continued.

Ozkok also pointed to Turkey’s inconsistent position today, after having dealt with the KRG over Baghdad’s head for so many years, and having hosted Barzani in Turkey on countless occasions. During Barzani's last visit, in February, Turkey raised the KRG flag next to the Turkish flag at the airports in Ankara and Istanbul.

Ardan Zenturk, a well-known television presenter and columnist for the pro-government Star daily, lambasted Ozkok as a pacifist "out to save the day." Zenturk said in his Sept. 25 column that the Turkish army had to move into a swath of territory between the Kurds in Syria and Iraq to disrupt the lines of communication between the two regions.

“Imperialism is determined to force our borders. We have to respond to this in a determined way,” Zenturk wrote, using agitating jargon close to nationalist hearts.

But Ozkok's not alone in counseling reason. Levent Gultekin, an outspoken Erdogan critic who writes for the opposition internet news portal Diken (Thorn), believes that threatening and insulting Barzani is not a rational approach for Turkey.

“If the Kurds want a state, it’s their business, not ours," Gultekin writes in his column. “Instead of using its energies on the Kurds outside the country … Turkey should try to strengthen its social cohesion by providing its Kurds, and indeed all of its citizens, with the means to live like humans."

Such views, however, are few and far between in today’s Turkey, where the government is successfully drumming up angry nationalist support against the KRG.

Ufuk Ulutas, the foreign policy research director at the government-sponsored Foundation for Political, Economic and Social Research in Ankara, said that while it was a positive thing at the time for Erdogan to cultivate close ties with Barzani, these ties will change.

“Barzani, who only managed to remain standing during his most difficult moments because of Turkey’s support, is prepared to lose his closest ally for the sake of a [Kurdish nationalist] project,” Ulutas wrote.

Unable to rely on Washington or Moscow, Turkey is hoping to cooperate with Baghdad and Tehran to prevent Kurdish political aspirations from maturing. There is a flurry of high-level contacts between the three countries today, leading many to believe they will act together against the Syrian and Iraqi Kurds.

Retired Ambassador Unal Cevikoz said the KRG referendum does not mean Iraq will be divided tomorrow, or that an independent Kurdistan will emerge overnight.

“If, however, the statements against the referendum turn to actions, and the post-referendum period is not managed rationally, this will be the most important factor that will threaten the future of Iraq,” Cevikoz wrote in an article for Hurriyet.

Speaking more broadly, if Turkey can’t find reasonable ways to deal with this new development involving the Kurds rather than issuing warnings and blaming others, it could easily end up with a new set of foreign-policy debacles in its lap.