Turkey’s problem with Syrian Kurds far from over

Ankara has accepted the Russian proposal to have Kurdish participation in Syrian national reconciliation while excluding the PYD, but the latter will remain the elephant in the room. 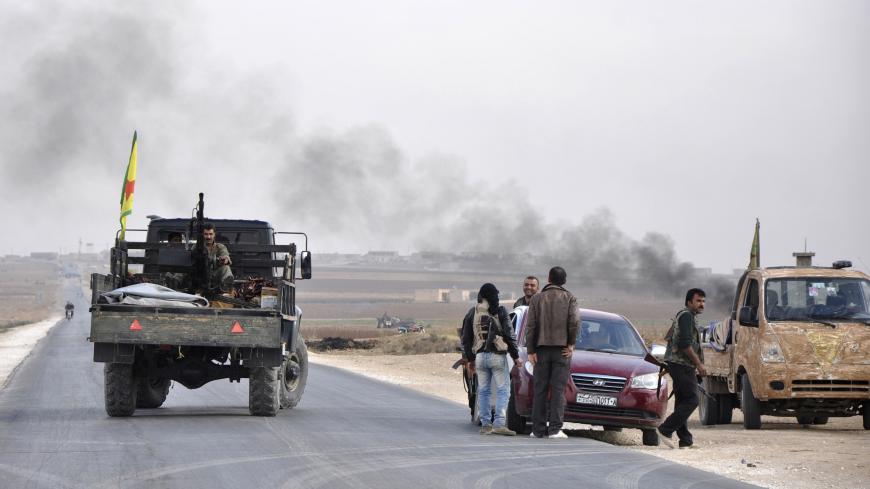 A member of the Kurdish People's Protection Units mans a weapon mounted on a pickup truck as others talk to each others along a street in the west of the city of Ras al-Ain, after capturing it from Islamist rebels, Nov. 5, 2013. - REUTERS

One concrete result from the meeting between Turkish President Recep Tayyip Erdogan and Russian President Vladimir Putin in Ankara on Dec. 11 seems to be Turkey’s acceptance of Kurdish participation in the Russian-sponsored Syrian National Dialogue Congress planned for early 2018.

But Turkey’s precondition remains the same — namely that the Democratic Union Party (PYD) and its military wing, the People's Protection Units (YPG), are excluded from this congress. Ankara says these are terrorist groups linked to the Kurdistan Workers Party (PKK) and refuses to participate in any effort to bring peace to Syria that includes them.

Moscow, however, has refused to list the PYD or the PKK as a terrorist organization. Ankara took exception some months ago when Moscow invited the PYD to take part in national reconciliation efforts in Syria. Following his meeting with Putin and Iranian President Hassan Rouhani in Sochi at the end of November, Erdogan reiterated Ankara’s position. “No one should expect us to sit under the same roof or come together on the same platform with a terrorist organization that threatens our national security,” Erdogan said during the press conference the three leaders held after their talks.

Nevertheless, it is not clear yet if Moscow has, in fact, agreed to ditch the PYD for Turkey’s sake. Some suggest that Moscow is seeking to get this group to participate in the National Dialogue Congress under a different name, which it hopes will be more palatable for Ankara.

The Turkish Karar newspaper broke the news last week that Erdogan and Putin had come to an understanding in Ankara over Kurdish participation in the National Dialogue Congress, which would exclude the PYD.

Foreign Minister Mevlut Cavusoglu told the Turkish NTV news channel, after the Putin-Erdogan meeting in Ankara, that they had furnished Russia with a list of groups they believe are the true representatives of the Syrian Kurds.

According to Cavusoglu, there are 300,000 Syrian Kurds in Turkey who fled YPG oppression and are prevented from returning to their homes by the PYD. Turkish press reports say the list of Kurdish groups Turkey supports includes 15 separate organizations operating under the banner of the Kurdish National Council (KNC), which is opposed to the PYD.

The KNC was established by the Kurdistan Regional Government (KRG) in Iraq in 2011 and was backed by Turkey in its campaign against the PYD. It is participating in the Geneva talks, but it is not clear how much support it has in Syria.

Cavusoglu admitted that they were still trying to convince Moscow regarding the list of Kurdish groups supplied by Ankara.

Even if Turkey accepts the participation of Kurdish groups other than the PYD in the National Dialogue Congress, this still leaves it facing a number of issues. One problem is the fact that the KNC, although it opposes the PYD, is also keen to have some degree of self-rule for Syrian Kurds.

It remains an open question whether Turkey is ultimately willing to accept an autonomous or semi-autonomous Kurdish region adjoining its border with Syria.

Ankara, on the whole, remains opposed to any political advances by the Kurds in the region. It demonstrated this clearly with its hostile response to Iraqi Kurds following their independence referendum in September. Ankara is wary that independence or political self-rule for the Kurds in Iraq and Syria will encourage its own restive Kurds to press on with similar demands.

Another problem Turkey faces has to do with proving that the KNC is the true representative of the Syrian Kurds. The PYD has proven its ability to play the field in Syria to the advantage of the Kurds by gaining the support of both the United States and Russia. It holds a large swath of Syria today because of this support, while the KNC holds hardly anything.

A Western diplomat in Ankara told Al-Monitor that most Kurds are likely to opt for the PYD, with its proven track record, rather than opt for groups that are backed by Turkey and have remained on the fringes while the YPG did the fighting against the Islamic State (IS).

“Kurds see elected Kurdish politicians in jail in Turkey and remember Ankara’s saber-rattling over the vote for independence by Iraqi Kurds. They will hardly be inclined to see Turkey as a friend of the Kurds,” said the diplomat, who was speaking on condition of anonymity due to his sensitive position.

There is also the problem of the territory the PYD has captured from IS in northern Syria with US support. How Turkey plans to dislodge the PYD from these areas under existing conditions and if necessary implant Kurds friendly to Turkey there is also unclear.

Nihat Ali Ozcan from the Economic Policy Research Foundation of Turkey believes that relying on the KNC is a nonstarter for Ankara. “It is not possible to disregard the fact that the PYD holds 20% of Syria,” Ozcan told Al-Monitor.

Ozcan said that Ankara’s reliance on the KRG to help in this matter is also unlikely to bear results. He pointed out that the KRG’s relations with the Syrian Kurds had also undergone a transformation since it helped found the KNC in Syria.

Ozcan added that relying on Syrian President Bashar al-Assad against the PYD was also unlikely to bring results. Hopes were raised in Turkey earlier this week after Assad declared the PYD to be a treacherous organization for cooperating with the United States against the Syrian regime.

Assad also said, however, that the same applied to any group in Syria that cooperated with outside powers. Given Turkey’s well-known support for groups that tried to topple him, Assad is unlikely to accommodate Turkey against the Syrian Kurds.

Assad also rejects the Democratic Federation of Northern Syria, the name given to the regions liberated by the PYD from IS with US support. Turkish reliance on this could also prove to be misguided, though, since Assad is likely to be forced by Russia to accept a compromise in this regard for the sake of peace in Syria.

Retired Brig. Gen. Naim Baburoglu, an expert commentator on developments in Syria and Iraq, also believes that Ankara’s efforts aimed at trying to replace the PYD with its own Kurdish groups in Syria amount to an exercise in futility.

Speaking to Al-Monitor, Baburoglu pointed to the amount of land the PYD controls east and west of the Euphrates River in northern Syria and questioned how Ankara plans to overcome this glaring fact.

“The United States will stay in Syria. So will Russia. Both superpowers have agreed on a federated future for Syria. This leaves Turkey with few options,” Baburoglu told Al-Monitor.

“Assuming for a moment that Turkey did succeed in replacing the PYD with Kurdish groups that it supports. Does it expect these other Kurds to come out and say ‘No, we don’t want a federated settlement?’” Baburoglu said.

He argued that Ankara had landed itself in this seemingly intractable position with its gross miscalculations at the start of the Syrian crisis. “The simple truth is that Turkey has three new neighbors in the southeast today. The United States, Russia and the PKK [he was referring to the PYD],” Baburoglu said, indicating in this way that Ankara would have to live with this fact.

If Turkey had not burned its bridges with Assad at the start of the Syrian crisis and had kept its own vital security interests above all other considerations, Baburoglu said, “then the situation would be very different today.”

Whichever way one looks at it, Turkey’s problems with the Syrian Kurds seem to be far from over. As for the PYD, it looks like it will remain the elephant in the room — one way or another.