It's unknown how far Moscow will go to appease Ankara with regard to the Syrian Kurds. 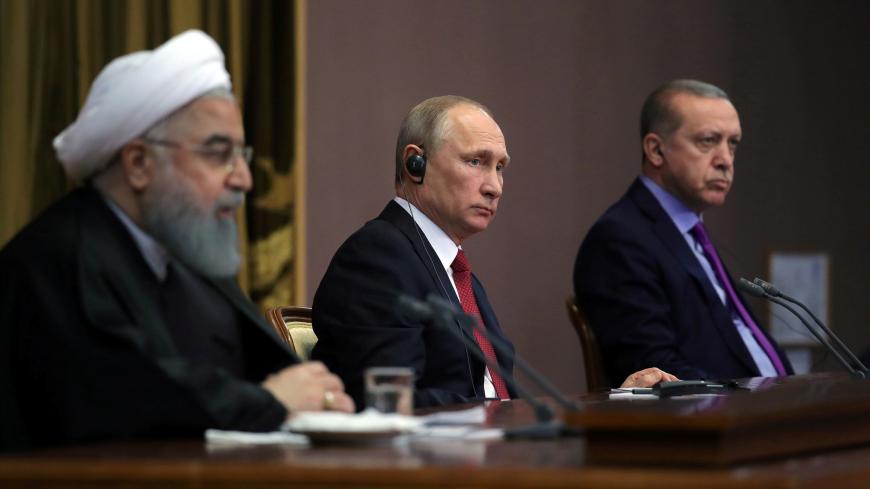 Turkish President Recep Tayyip Erdogan returned from the Russian resort city of Sochi last week pleased with his meeting with Russian President Vladimir Putin and Iranian President Hassan Rouhani. Erdogan said that important decisions had been made regarding the future of Syria at the trilateral summit.

Flying back from Sochi, Erdogan told reporters on his plane that the leaders had agreed that the territorial integrity and political unity of Syria should be preserved.

“Our basic aim is to arrive at a respectable political settlement to be accepted by the Syrian people,” Erdogan said. “We discussed the matter of a Syria National Dialogue Congress in detail. We three countries will decide who will be invited to the congress."

Nevertheless, Erdogan’s optimism could not shroud the fact that Turkey is set to face some unsavory facts as the “Astana process” for Syria — initiated by Russia, Iran and Turkey — moves to the next stage, with Moscow calling the shots.

Erdogan’s support for a “political settlement” in Syria means he has effectively completed his about-face regarding Syrian leader Bashar al-Assad, who he had labeled “a murderer” not so long ago.

Erdogan’s optimism could not shroud the fact that Turkey is set to face some unsavory facts as the “Astana process” for Syria … moves to the next stage, with Moscow calling the shots.

“Assad is a murderer who killed 600,000 of his citizens to date," Erdogan said in June 2016. "He is an occupier in a country where 12 million people have been separated from their homeland. He is someone who has employed state terrorism. … I believe all of humanity must cast out Assad.”

Middle East expert Serhat Erkmen believes Ankara has no choice but to change its position after Assad proved his staying power — with support from Ankara’s “Astana partners,” Moscow and Tehran.

“Ankara appears to have come around to accepting that there is not much to be gained from continuing to insist on this point, when most of the important players are agreed on Assad continuing in his job,” Erkmen told Deutsche Welle in an interview after the Sochi summit.

Assad’s surprise arrival in Sochi, a day before the trilateral summit, where he was warmly received by Putin, was enough to prove that he is very much part of the game. Putin undoubtedly told Assad to tone down some of his demands, but Erdogan will have to live with the fact that he remains a key player.

Wary of a potential backlash from Erdogan’s Islamist supporters, Mahir Unal, a spokesman for the ruling Justice and Development Party, told reporters a day after the Sochi meeting that “Assad cannot remain a political actor on the political stage after the transition period.”

The mood regarding Assad among some of Erdogan’s supporters, however, is also changing. Ibrahim Karagul, the editor-in-chief of pro-government newspaper Yeni Safak, for example, is arguing now that “Turkey should not have an Assad hang-up,” and says it should concentrate its efforts on the bigger threat that faces Turkey.

He is referring to the military and political headway made in Syria by the Kurdish Democratic Union Party (PYD) and its military wing, the People's Protection Units.

Ankara continues to castigate Washington for supporting these groups, which it says are terrorist organizations linked to the outlawed Kurdistan Workers Party (PKK). Ankara remains mostly silent, however, over Moscow’s support for the same groups, which brings up the second unsavory issue that Erdogan will have to face as the decisions made in Sochi unfold.

Erkmen said Ankara’s fixation on the PYD is what has pushed it to accept Assad. “For Turkey, the road to preventing a region being controlled by the PYD passes through the central government and on Assad’s retaining power, at least for a time longer,” Erkmen argued.

Moscow has made it clear, however, that it wants PYD participation at the Syria National Dialogue Congress. Ankara rejects this and said it will not participate in that congress if the PYD is there.

Erdogan repeated this in Sochi, during his press conference with Putin and Rouhani, effectively confirming that he had failed to get what he wanted in this regard. “No one should expect us to come under the same roof with a terrorist organization,” Erdogan said.

Ankara is disappointed that the final communiques of the trilateral summit did not list the PYD as a terrorist group, referring only to the Islamic State (IS), Jabhat Fatah al-Sham and other groups designated as terrorist organizations by the UN Security Council.

The only concession Erdogan seems to have gotten in Sochi, as indicated in the final communique, was that “Iran, Russia and Turkey will consult and agree on participants of the congress.”

Burhanettin Duran, the general coordinator of the government-sponsored SETA think tank in Ankara, indicated that the question of PYD participation in this congress remains unresolved.

“[Russia] does not consider the PYD or the PKK as a terrorist organization," Duran wrote in his column for the pro-government Sabah. "More than that it looks warmly on the idea of including it under the Assad administration."

He said the question of whether the PYD would be included in the Syrian congress was “the most uncertain aspect of the Sochi summit.”

The question now is whether Ankara will be allowed to block PYD participation in the political process, especially if Moscow and Washington continue to support this group. Tehran has not said much on this issue, which also makes Ankara wary.

Erkmen believes there is a strong possibility that Moscow will want to integrate this group into the system in Syria.

Erdogan told reporters while flying back from Sochi that Turkey’s problem is with the PYD, not the Syrian Kurds, which suggests that Ankara may be trying to get used to the idea of Kurdish participation in any Syrian settlement.

Putin’s vision for Syria, however, includes a constitution that does not exclude an autonomous region for the Kurds under a unified Syria. In practice, this refers to areas wrested by the PYD from IS with US support, and currently under some Russian protection, most notably in Afrin.

It is not clear, though, if Ankara is ready to accept an autonomous Kurdish region in Syria.

Erdogan further told reporters that Assad is also opposed to the PYD. Ironically, Ankara had accused the PYD of collaborating with Assad when this group first made its mark in Syria.

Assad, for his part, has no love for Erdogan and is unlikely to bow to any pressure from Ankara regarding the Kurds. He will only act against them if it suits him. The main threat for Assad will continue to be from Sunni groups supported by Ankara rather than Kurds supported by Moscow.

With Turkey sticking firmly to its position on the PYD, Russia’s challenge will be to move ahead to the next stage in Syria, in line with Putin’s vision, without angering Ankara.

It is not clear if Moscow is prepared to go the whole way to appease Ankara in this regard, especially if appeasement has the potential to scuttle a Syrian settlement.

Already there are reports that the proposed National Dialogue Congress has been postponed until February. Whether Moscow can convince Ankara regarding the PYD before then remains an open question.

There is also the question of what Moscow will do if it can’t convince Ankara and where this will leave Turkey in efforts to settle the Syrian crisis.

The bottom line is that, while Erdogan came back from Sochi pleased, many questions remain unanswered, pointing to troublesome times ahead for Ankara in Syria.