Turkey pledges to back Baghdad against Kurds

Turkish Prime Minister Binali Yildirim praised the capture of Kirkuk by Iraqi forces as Turkey continues to express outrage over the Kurdish vote for independence. 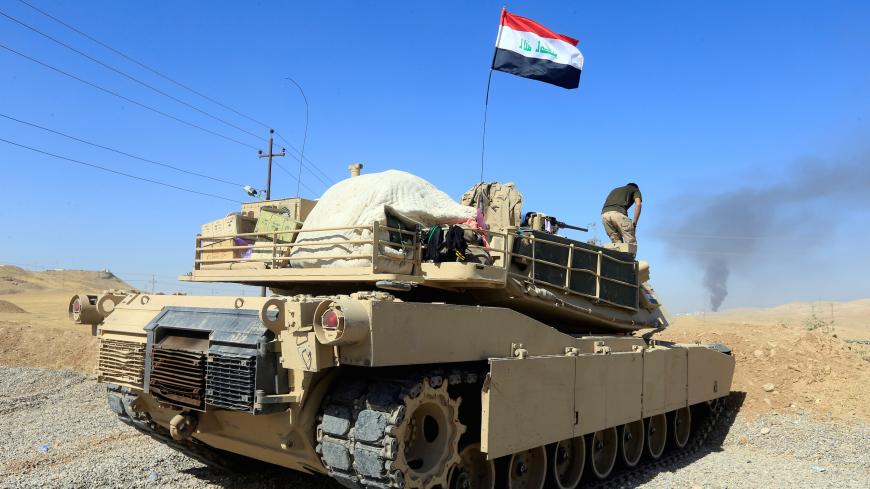 A tank belonging to the Iraqi military is seen in the Dibis area on the outskirts of Kirkuk, Iraq, Oct. 17, 2017. - REUTERS/Alaa Al-Marjani

Turkey has thrown its support behind the Iraqi government, whose forces took control of the mainly Kurdish-run city of Kirkuk and its nearby oil fields after last month’s Kurdish independence referendum sparked a confrontation that threatens the balances in a war-weary region.

Iraqi troops were met with little resistance from Kurdish peshmerga fighters in a lightning-quick operation on Monday when they captured the oil-rich city of Kirkuk, part of disputed territories mainly controlled by the semi-autonomous Kurdistan Regional Government (KRG) despite being outside of the autonomous region.

“For years there have been attempts to change the demographic structure in Kirkuk with de facto situations. It is a positive development that the Iraqi central government has retaken control of Kirkuk,” Turkish Prime Minister Binali Yildirim told party members in parliament on Tuesday.

Late on Monday, Yildirim’s Cabinet decided to close Turkish airspace to flights to and from airports in Kurdish-run northern Iraq and to begin the process of giving the central government control of the Habur border gate, which has been run by the KRG on the Iraqi side.

The measures are a clear shift in Ankara’s stance toward Iraqi Prime Minister Haidar al-Abadi’s government, with whom Turkey has repeatedly sparred in recent years, and a clear reiteration of its anger over the once-friendly KRG’s decision to hold the vote for independence on Sept. 25 despite opposition from Turkey, Iraq, Iran and the United States. A day after the vote, Turkish and Iraqi soldiers held a joint military exercise in Turkey near its border with Iraq.

However, sharp differences remain with Baghdad. Yildirim canceled a visit to the Iraqi capital this week that had been scheduled before the Kirkuk operation. The two sides were to discuss steps to take together against the KRG, Turkish media outlets reported.

According to Cumhuriyet, the visit was canceled because Turkey rebuffed Baghdad’s long-standing demand that Turkish troops withdraw from the Iraqi town of Bashiqa, near Mosul. Tensions between Turkey and Iraq flared last year over the presence of an estimated 2,000 Turkish soldiers in Bashiqa and other parts of northern Iraq. At the time, Turkey said its forces were there at the request of Iraqi Kurdistan President Massoud Barzani and were training peshmerga and Sunni fighters ahead of the US-led campaign to retake Mosul from the Islamic State.

Turkish officials told their Iraqi counterparts a withdrawal of Turkish troops from Bashiqa was “not our priority” at present, Cumhuriyet reported. Iraqi officials also want Turkey to deliver on its threats to halt Kurdish oil exports, it said.

Still, the common ground Turkey has found with Iraq as well as Iran in its opposition to the KRG is a rare display of regional unity, forged by shared apprehension that the vote for independence in Iraqi Kurdistan will stoke separatism among Kurds in their own countries. Turkey is home to about half of an estimated 35 million Kurds who occupy a crescent-shaped expanse across Turkey, Syria, Iraq and Iran.

The Kurdistan Workers Party (PKK) has waged a 33-year insurgency in Turkey at a cost of more than 40,000 lives. Turkey had fostered economic and diplomatic links with Barzani, seeing him as a counterweight to the PKK and enjoying trade with the Kurdistan Region that hit $5 billion in the first six months of this year. Close ties with Barzani were also a means to pressure an unfriendly Baghdad.

All that changed with the independence referendum, which passed with 93% approval. President Recep Tayyip Erdogan warned Turkey could take military action over the “illegal and illegitimate” vote.

"Barzani's push for an independence referendum upended Turkey's interests and strategy in Iraq. Until recently, there was speculation that if Turkey were to militarily intervene in Iraq, it would do so in cooperation with Barzani, either against the PKK or Iranian-backed forces,” Nicholas Danforth, senior policy adviser at the Bipartisan Policy Center in Washington, told Al-Monitor. “At the point where Erdogan was forced to side with Baghdad in taking a firm stand against Barzani and KRG independence, he sacrificed some of his leverage with Baghdad as well,” Danforth said.

Turkey is especially anxious over reports that Iraqi Kurdish authorities brought in PKK militants to Kirkuk. The Foreign Ministry said on Monday that Turkey was ready to fight the PKK with Baghdad.

Aydin Selcen, a former consul general in the Iraqi Kurdish capital of Erbil, sounded an alarm over the severe tone. The rhetoric taps into nationalist sentiment at home and may stoke resentment among Turkey’s Kurds, he told the independent media platform Medyascope TV.

“Kurds, be they in Syria or Iraq, are Turkey’s neighbors, and they are not going anywhere. What does it say to Turkey’s Kurds, will this benefit peace in Turkey? Will it contribute to Turkey being an effective player in regional politics? The winners here are Tehran and Baghdad,” Selcen said. “I am concerned that [Turkey’s] political calculations are for the very short term and that in the long run there will be a price to pay.”