As Iraqi Kurds vote for independence, Turkey dials up hostility

Kurds in northern Iraq are holding a historic vote for independence, but opposition from their neighbors, especially Turkey, has ratcheted up regional tensions. 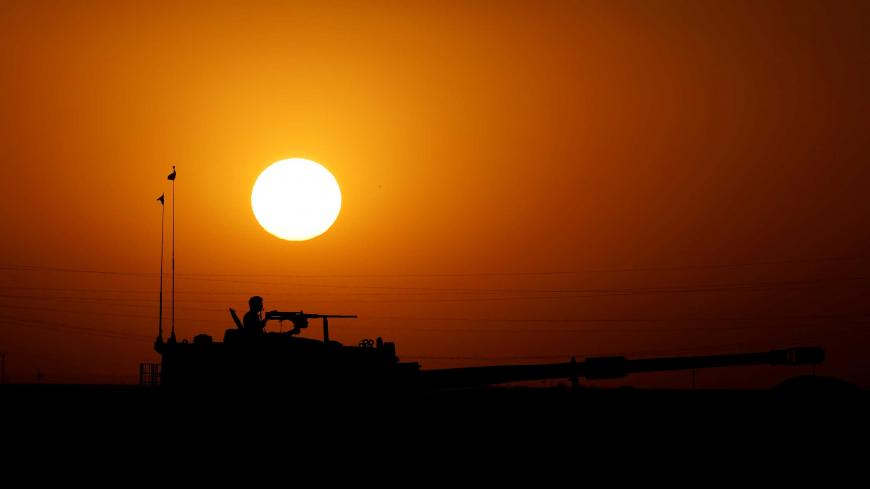 A Turkish tank maneuvers during a military exercise on the Turkish-Iraqi border at Silopi, Turkey, Sept. 23, 2017. - REUTERS/Umit Bektas

Kurds in northern Iraq are casting their ballots in a referendum that moves the region closer than ever before toward full independence. But outrage in Turkey over the measure cast a pall over the historic vote.

Turkey, like other neighbors, has made it clear it will no longer be business as usual with the Kurdistan Regional Government (KRG), which called the plebiscite to crown a quarter-century of autonomy for what is considered the world’s biggest ethnic group without a state.

“This referendum is unacceptable. We stood by them during their most difficult times,” Erdogan said in a televised speech, referring to the close economic and political ties Ankara and Erbil have cultivated over the last decade. He then alluded to a potential Turkish military operation in Syria, adding, “We will not shy away from doing the same in Iraq.”

Turkey sees a new Kurdish state, even a friendly one, as an existential threat amid fears it will stoke separatism among its own estimated 16 million Kurds, by far the world's largest population of the ethnic group found in a crescent spanning Turkey, Iraq, Syria and Iran. Turkey has spent 33 years and hundreds of billions of dollars fighting the armed Kurdistan Workers Party (PKK), which has, variously, sought independence or autonomy within Turkey at a cost of more than 40,000 lives.

Voters are expected to overwhelmingly approve the referendum in polls closing at 1500 GMT, but KRG President Massoud Barzani has said the enclave will not immediately declare sovereignty.

That promise has not tempered Turkish opposition. Turkey's parliament held a special session on Sept. 23 to extend a one-year mandate for the military to deploy troops to Iraq and Syria, moving up the extension of the mandate, first introduced for Iraq in 2007, to coincide with the referendum and serve as rebuke to the KRG.

Only the pro-Kurdish Peoples’ Democratic Party voted against the mandate, with lawmaker Osman Baydemir telling the assembly it “was a declaration of hostility against 40 million Kurds.”

The Turkish legislature acted one day after the National Security Council, chaired by Erdogan and attended by top generals, deemed the referendum “a direct threat to Turkey’s national security." In a statement, the council wrote, “Should this referendum take place despite our warnings, Turkey reserves its rights borne out of bilateral and international agreements … Grave consequences are inescapable,” it concluded without elaborating.

Turkey's armed forces are already conducting military exercises just kilometers from the Iraqi border. On Monday, Erdogan said the show of force was not “in vain.”

Still, military action against the KRG remains a remote possibility, especially as Erdogan used the same speech to warn Turkey would “suddenly come one night” across the Syrian border to stop PKK-linked Kurds from further advances toward their own self-rule in a region they call Rojava.

“You can only go to war with so many Kurdish statelets on your southern border, and currently Rojava still seems like the priority,” Nicholas Danforth, a senior policy adviser at the Bipartisan Policy Center in Washington, told Al-Monitor.

Turkey is not alone in pressuring the KRG on the vote. The United States, Iran and the central government of Iraq have also called on Barzani to postpone or cancel, to little effect.

But Ankara has poured billions of dollars into the semi-autonomous Iraqi Kurdistan, building it a gleaming new airport and importing more than a half-million barrels of Kurdish oil every day, underpinning the region’s economic independence.

Erdogan has personally embraced Barzani, seeing him as a counterbalance to the PKK, listed as a terrorist group by Turkey, the United States and Europe for its insurrection against the Turkish state. The PKK is based in a remote corner of northern Iraq, and Barzani has turned a blind eye when Turkish troops pursue the militants there.

A prosperous, semi-autonomous Iraqi Kurdistan at odds with Baghdad, with which Ankara has repeatedly sparred, has also suited Turkish geopolitical calculations in recent years.

“Ironically, Barzani is one of Turkey’s closer partners in the Middle East,” said Danforth. “But between increased concern over Kurds’ growing strength in Syria and Erdogan’s nationalist turn domestically, he was forced into a corner on this.”

Now, Ankara has joined Baghdad as well as Tehran in saying it is considering coordinated “counter-measures” against the Kurdish-run territory, according to a joint statement from the foreign ministers of the three countries on Sept. 21.

Yet the saber rattling did little to dampen Kurdish enthusiasm for the referendum, with witnesses in the region’s two largest cities of Erbil and Sulaimaniyah describing the mood as calm, even buoyant.

“It has solidified their will to stick together, to not give up on their dream,” Akeel Abbas Al-Khakani, an analyst based in Sulaimaniyah, told Al-Monitor. Should the vote trigger outright fighting with neighbors, he said, “The mountains are always there as their refuge. I am more often hearing the old Kurdish saying, ‘Kurds have no friends but the mountains.’”