Kurds divided over blame for loss of Kirkuk

The recapture of Kirkuk by Iraqi forces in the aftermath of the independence referendum is a heavy blow for Kurds in Iran, Syria and Turkey. 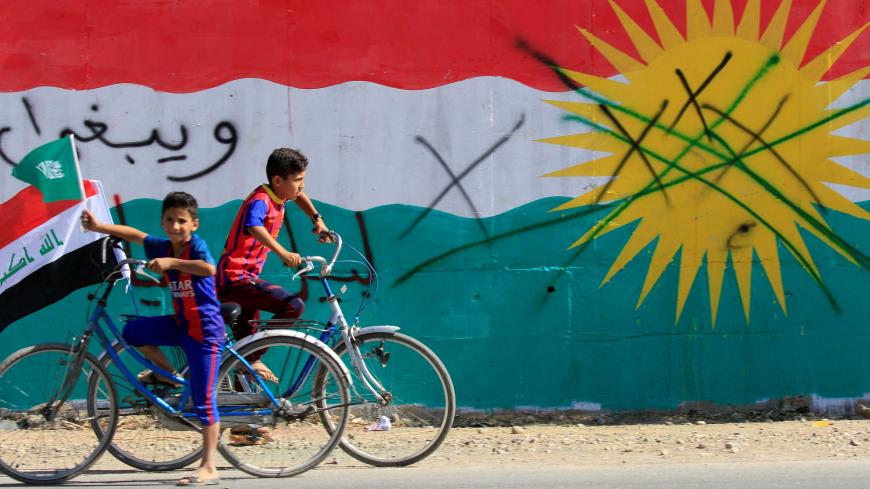 A boy rides a bicycle decorated with an Iraqi flag past a graffitied mural of a Kurdish flag on the outskirts of Kirkuk, Iraq, Oct. 17, 2017. - REUTERS/Alaa Al-Marjani

The retaking of Kirkuk by Iraqi forces in October sent shock waves throughout Iraq’s Kurdistan Region. Protests took place in Erbil, including at the US Consulate. Kurds took to social media to lament the Iraqi victory, criticizing the country as well as the Popular Mobilization Units, Kurdistan Regional Government (KRG) politicians, Iran and Turkey. The reverberations were also felt in Kurdish communities elsewhere in the Middle East.

“As a Kurd, I was saddened,” Alborz Rointan, a member of the Democratic Party of Iranian Kurdistan (KDPI), told Al-Monitor about Kirkuk. “Iranian Kurds after the referendum took to the streets and showed their happiness.”

Kurdish groups across the Middle East support the holding of the Kurdistan independence referendum, despite ideological differences and consequences for the region following the vote. However, they disagree considerably on the responsibility for the loss of Kirkuk.

Rointan said that Iran is to blame for what happened in Kirkuk and that former Iraqi Kurdistan President Massoud Barzani should remain in a leadership role in the party. On the strategy of Kurdish parties in Iran, he said it will not change after events in neighboring Iraq. “Kurds in Iran do not have an independence request now,” he noted. “But central governments have never responded to any Kurdish demands. To create a democracy and a society with universal values that respect Kurdish rights, we must ask for independence.”

In a press release, the KDPI condemned Iraq’s military actions in Iraqi Kurdistan and warned Iran against carrying out attacks on their and the Society of Revolutionary Toilers of Iranian Kurdistan (Komala) positions.

Others do in fact blame Barzani and the KRG, however. “Most importantly, it was conducted without the consensus of all Kurdish political forces,” Nour al-Din Omar, a writer and supporter of the Democratic Union Party in Syria, told Al-Monitor. “It was a way of shoring up support for the president’s [Barzani] weakened authority and show him as a national leader of the Kurdish people.”

Omar blames the resulting actions against the KRG, including the suspension of international flights and territorial losses, on the KRG itself. “The withdrawal of Kirkuk without resistance was a serious mistake committed by the leaders of Iraqi Kurdistan,” he said. “I wasn’t with the war, but you had to take the American warnings seriously. … KDP [Kurdistan Democratic Party] and PUK [Patriotic Union of Kurdistan] leaders should at the least have resigned.”

At the same time, Omar said holding the referendum was a legitimate process.

Ardalan Osman, a leader in the European chapter of the Kurdish Future Movement in Syria, places blame on the PUK for Kirkuk, like many in the KDP. “Those who bear responsibility for this heinous crime are certain members of the PUK and the Talabani family, who sold themselves to Qasem Soleimani,” he told Al-Monitor, referring to the famed Iranian military commander.

The PUK has been accused of making a deal with Iraq to withdraw Kurdish forces from Kirkuk, though party leader Bafel Talabani said they only withdrew when defeat was imminent.

Osman believes the KRG is at fault nonetheless. “Until now, they haven’t been able to make the peshmerga a national force. It has remained a force of the KDP and PUK,” he said. “The regime power and institutions all need to change. They suffer from corruption, domination and dictatorship.”

Osman said that in Syria, the Kurdish Future Movement and other groups will continue to support federalism, not outright independence, following what happened to the KRG.

The Kurdish Future Movement is part of the Kurdish National Council, supported by Barzani. Their armed wing, the Rojava Peshmerga, has been prevented from fighting in Syria by the People’s Protection Units, who seek to be the sole Kurdish military force in the country. The Rojava Peshmerga has instead fought alongside the peshmerga in Iraq against the Islamic State.

During fighting between the Rojava Peshmerga and Iraqi forces in Ninevah following the battle of Kirkuk, the Rojava Peshmerga originally refused to pull out from Zummar during the retreat of Kurdish forces, said Minyar Hafirki, a soldier in the group. They ultimately left the area, but the battle demonstrated the defiance of some Kurdish groups toward the KRG’s losses.

In Turkey, the actions by the government, Iran and Iraq against the KRG following the referendum caused sadness throughout the Kurdish community. “Supporting Kirkuk means supporting the dignity of the Kurdish people and Kurdistan,” Osman Baydemir, the former mayor of Diyarbakir and Peoples’ Democratic Party lawmaker, said during the battle, according to local media.

The Iraqi government said that members of the Kurdistan Workers Party, a Turkish militant group that has traditionally been opponents of Barzani, was fighting in Kirkuk alongside the peshmerga in Kirkuk.

The autonomy the KRG has enjoyed since the era of Saddam Hussein and the US invasion is now at risk following the referendum. “Should Iraq roll it [the 2003 borders] back, the realistic chances for independence will die out. Should the KRG survive, however, it can start over: rebuild, invest in institutions that guarantee good governance and resilient economies, and wait for the next opportunity to arise,” Bilal Wahab, a fellow at the Washington Institute for Near East Policy, told Al-Monitor.

And the referendum aftermath could have repercussions for the Kurds in Iran, Syria and Turkey as well, according to Wahab. “The fierceness with which Iraqi forces roll back the KRG and the blank support Iran and Turkey are extending is a message not only to the Kurds in Iraq but to all of them in the Middle East,” he said.

The KRG’s independence bid exposed the autonomous region’s political and military weaknesses, as well as its internal political divisions. It also showed that the states where the Kurds live are adamant in opposing any statehood for them. At the same time, the Kurdish defeats haven’t stopped Kurdish activism in the Middle East and in the diaspora.

“Everybody talked about how they couldn’t eat or sleep for days after Kirkuk,” Najman Sindi, a Kurdish activist in Norway who is originally from Zakho, Iraq, told Al-Monitor. Sindi organizes demonstrations outside embassies and with Norwegian political parties in Oslo. “We’re doing all we can here. You can never give up.”