Turkey’s isolation over Egypt has forced it to rethink its regional policies. 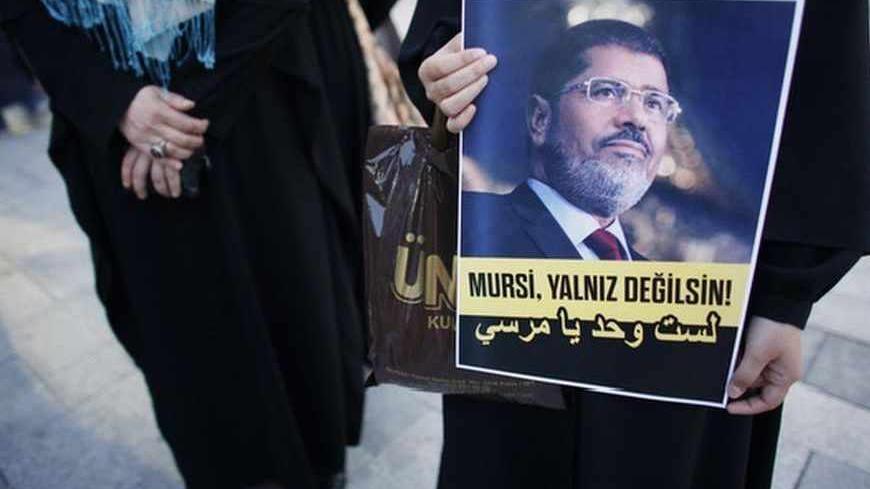 A woman holds a poster of Egypt's then-president Mohammed Morsi during a pro-Islamist demonstration in Istanbul, July 1, 2013. - REUTERS/Murad Sezer

Prime Minister Recep Tayyip Erdogan and members of his Justice and Development Party (AKP) continue to blast the West over the Egyptian coup. Conspiracy theorizing in Turkey’s Islamist and pro-government media as to who is behind the toppling of democratically elected President Mohammed Morsi is at its peak, with the US and Israel cast in the usual role of villain.

Part of Erdogan’s current and persistent narrative is that the West failed to help Morsi at a time of dire economic need, the implication being that this was part of a plan to stop the rise of the Muslim Brotherhood and political Islam not just in Egypt, but in the region as a whole.

Continue in this vein as they may, Erdogan and members of his government are revealingly silent concerning the news that Gulf States, headed by Saudi Arabia and the United Arab Emirates, have pledged at least $8 billion in emergency aid to Egypt to prop up the transitional government installed by the military.

This silence against key Arab countries that applauded the ouster of Morsi and dealt a serious blow to the Muslim Brotherhood indicates that there is a limit for the AKP as to who it will criticize, since it can ill afford to alienate major Middle East powers at a time when Ankara’s regional influence is markedly on the wane.

As an aside here, it must be mentioned that remarks by Foreign Minister Ahmet Davutoglu earlier this week also acknowledged, albeit indirectly, this declining influence and reflected a desire to ensure this does not happen.

“We are either going to concern ourselves with the fate of our brothers in the whole of this geography, and know their problems as problems, their pain as pain and their tears as tears, or we are going to be cut off from these circles due to a feeling of being trapped in Anatolia, and find it difficult to remain standing,” Davutoglu told a gathering of representatives from conservative NGOs in the city of Gaziantep on July 10.

Curiously, this somewhat rhetorical remark, which indicates that Turkey will try to remain a player in the region despite the mounting odds against it, was not included in the abridged text of his speech on his ministry’s official web page. Davutoglu’s remarks were, however, quoted prominently by Yeni Safak, the leading Islamist and pro-government daily, which has also been heading the angry chorus in Turkey on behalf of Morsi.

The Islamist and pro-government media in Turkey is now trying to cope with the new reality that has emerged in the region, which it has always suspected, but was not prepared to voice openly due to the need for solidarity among Islamic nations. What lies at the core of this reality is the unwelcome awareness that being Islamic and Sunni, even of the ultra-conservative Wahhabi shade, is not on its own a sufficient unifying factor for Muslim nations.

Al-Monitor’s Mustafa Akyol is correct in saying that most of those who are commenting on Egypt in Turkey today could not even name the main political actors. The same can be said of awareness of the region as a whole, which is surprisingly minimal, barring a few notable exceptions and generally marked by assumptions rather than facts.

So the Egyptian coup has inevitably brought up some unwelcome facts about the Middle East for many AKP supporters that are hard to digest. This is why it is a setback for Islamists to see Saudi Arabia, the "keeper of the holiest sites of Islam,” siding with those who toppled a democratically elected Islamist government and president, thus dealing a serious blow to the advance of political Islam.

Given this situation, we now see criticism of Islamic countries that supported the Egyptian coup, starting with Saudi Arabia, creeping into the pro-government media in Turkey. This criticism also includes an occasional swipe at Iran over its silence in the face of developments in Egypt.

Ibrahim Karagul, the editor-in-chief of Yeni Safak, for example, dwelled on the subject in a July 11 commentary. In his piece, headlined “Nefarious alliance that is drowning coup perpetrators in money,” Karagul maintained that the military takeover in Egypt is the product of a multinational effort, saying, “Let us look at which countries supported the coup. The United States, EU, Israel, Saudi Arabia … What a front, huh?"

"The money faucets were turned on immediately,” he wrote, adding that the real concern is Islamists spreading their regional influence by democratic means. “The United States, Israel and Saudi Arabia share the same fear. That fear is not Islamism, in fact. The fear is that the old order is going to change, and power and wealth are going to disappear.”

Kerim Balci, an expert on the Middle East for the Islamist Zaman daily, for his part, indicated in his commentary on July 12 that it would be wrong to interpret the coup in Egypt by referring to that country’s inner dynamics alone and pointed to the “regional fears and ambitions of Iran and Saudi Arabia.”

Indicating that over $12 billion was pledged to Egypt within four days of the coup by regional powers, starting with Saudi Arabia and the UAE, Balci maintained that even Saudi-supported Egyptian Salafists have cooperated with the remnants of the former regime against the Islam-driven Muslim Brotherhood.

“We are going through a period in the region when politics are being forced into the secular line. [The Muslim Brotherhood] is being pushed out of all regional political processes in a conscious manner,” Balci argued, establishing an interesting link between fundamentalist Islamic countries and groups, and secularism.

Ali Bulac, a prominent Islamic intellectual and another commentator for Zaman, also listed the countries and organizations that allegedly backed the Egyptian coup in his own July 11 column. These included the United States and EU, Israel, Saudi Arabia, Syria and the “Gulf Monarchies,” as well as Russia. Bulac also castigated the Islamic Cooperation Organization for its silence on Egypt.

“Don’t think I have forgotten about Iran,” Bulac added, and went on to say, “Iran, the home country of the revolutionary spirit, has disappointed me deeply. It too could not call a wolf a wolf, and condemn those who carried out the coup. Shamefully, it too took part in the ‘coalition of wolves.’”

Such angry expressions of disappointment among AKP supporters in regional Islamic powers are bound to increase in the coming days as it becomes clearer that reinstating Morsi, as is being demanded, no longer appears possible.

It also remains to be seen how Erdogan and his government react to the position the Gulf states, and even an initially reluctant Qatar, which are now taking on Egypt. It seems unlikely that they will want to go into any direct confrontations with these countries given Turkey’s growing economic interest in the region. This interest will obviously require cooperation with the Middle East’s established order.

How the Islamist media in Turkey — which is full of abuse for the West for failing to call what happened in Egypt a coup — will react to the silence of Erdogan and his government toward the region's Sunni powers that are supporting the Egyptian coup also promises to be interesting in the coming days.