Prospects for improved relations between Ankara and Cairo appear dimmer than ever following recent executions in Egypt. 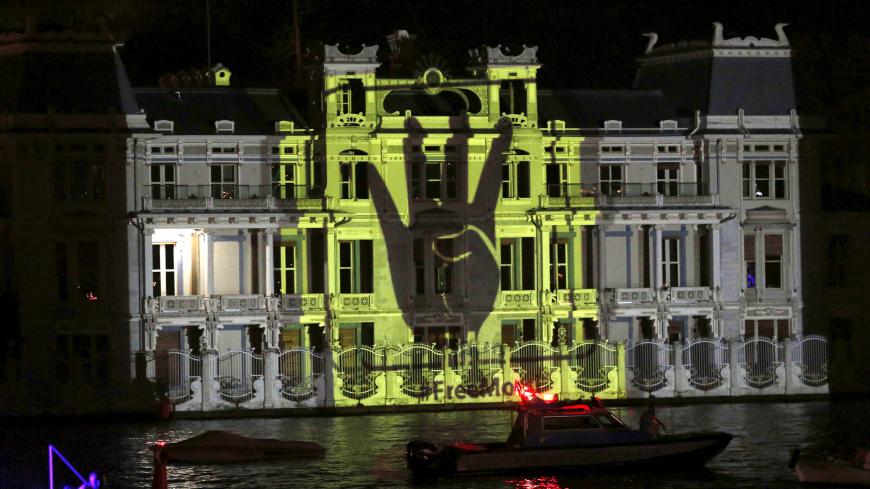 The Rabia sign is projected on the Egyptian Consulate during a protest against an Egyptian court's decision to sentence deposed President Mohammed Morsi to death, in Istanbul, Turkey, June 16, 2015. - REUTERS/Murad Sezer

Prospects for improved relations between Ankara and Cairo appear dimmer than ever following the recent executions of nine men in Egypt for alleged involvement in the assassination of chief prosecutor Hisham Barakat in 2015.

Those executed were reportedly members of the Muslim Brotherhood, which has close links to President Recep Tayyip Erdogan’s Islamist Justice and Development Party (AKP).

During a live interview with CNN Turk on Feb. 23, Erdogan condemned the executions and vowed never to speak with Egyptian President Abdel Fattah al-Sisi.

“I am answering those who ask why Tayyip Erdogan does not meet with Sisi, because there are mediators who come to us from time to time. I will never talk to someone like him,” Erdogan said.

“To start with, he has to declare a general amnesty and release all those in prison,” he added, referring to the scores of Muslim Brotherhood members or supporters incarcerated in Egypt. “If he doesn’t release them we will never talk to Sisi.”

Erdogan also accused the West of turning a blind eye to human rights violations in Egypt, although it rarely missed an opportunity to criticize Turkey in this regard.

The EU-Arab League summit, held in the Egyptian resort of Sharm el-Sheikh, a day after Erdogan’s remarks, and under the shadow of the executions in Egypt, merely added to Ankara’s indignation.

Foreign Minister Mevlut Cavusoglu said Europe had reached “the pinnacle of double standards” by holding this summit in Egypt.

“For EU leaders to go and support Sisi and to be with him in the same place at a time when nine [young men] were executed is a picture of exactly what we are saying,” Cavusoglu said.

Commentators in the pro-government media were quick to take the cue from Erdogan and Cavusoglu. Selcuk Turkyilmaz, a columnist for the Islamist Yeni Safak daily, established a link between the EU-Arab League summit and the 2016 coup attempt in Turkey.

“The execution of nine innocent young people in Egypt also shows what awaited Turkey after 2016 [if the coup attempt had not failed],” Turkyilmaz wrote.

He claimed that by attending the summit in Sharm el-Sheikh, EU leaders endorsed the executions in Egypt. Turkyilmaz recalled how the EU had also chosen to remain silent as the abortive coup attempt in Turkey was underway.

The state of Turkish-Egyptian ties has changed little since Sisi toppled the country’s democratically elected Islamist president, Mohammed Morsi — a close ally of Erdogan — in a military coup in 2013.

All attempts at rapprochement have been rebuffed by Ankara. Erdogan’s latest remarks show that the situation is unlikely to change soon.

During the now all-but-forgotten Arab Spring, Ankara was confident its close ties with the Muslim Brotherhood would secure its entry to the Middle East as a game-changing power.

Ankara’s reliance on Arab streets to force undemocratic regimes to be toppled one by one, and replaced by elected Islamist governments, proved to be the historically flawed premise on which its dreams in the Middle East foundered.

“It is not clear what Turkey has gained from its current policy, but it is evident what it has lost.”

Its mistaken assumptions came to a head with the coup in Egypt. After Morsi’s electoral victory in 2012, Ankara invested most of its regional expectations in Egypt. Egypt, however, ended up being the country that ended these flawed expectations.

While the Egyptian coup dealt the first blow to these expectations, the second blow came when most of the region’s Sunni Arab regimes, starting with Saudi Arabia, supported Sisi’s takeover. The third blow came with the banning of the Muslim Brotherhood as a terrorist group by many Arab states, with a few exceptions, like Qatar.

Many analysts cautioned at the time that historic undercurrents in the Middle East should not be underestimated. These included Arabism and Arab nationalism, as well as the abhorrence among Arab regimes of political Islam, which they feared would undermine the region’s existing order.

Ankara’s misconceptions have now come home to roost. Turkey is more isolated in the Middle East than it ever was in the past due to its support for the Muslim Brotherhood, a group that most Arab leaders consider to be an existential threat.

This support has also left Ankara facing accusations of backing terrorism. Cairo repeated this accusation in its response to Erdogan’s remarks about Sisi.

Foreign Ministry spokesman Ahmed Hafez said in a statement that Erdogan had shown his hatred for Egypt. He added that Erdogan also “expressed his continued embrace of the terrorist Brotherhood group.”

In an effort to turn the tables on Ankara, Hafez said Turkey has 70,000 political prisoners in addition to imprisoning 175 Turkish journalists. Additionally, around 130,000 government employees have been fired over alleged links to the 2016 coup attempt.

"This narrative illustrates the lack of credibility of what the Turkish president is promoting," Hafez said.

Despite his refusal to normalize ties with Cairo, Erdogan is facing a dilemma. Far from being isolated in the world, Egypt is making headway internationally, as demonstrated by its hosting of the EU-Arab League summit.

It has also established alliances with Turkey’s rivals — Greece, Cyprus and Israel — to jointly extract, process and supply natural gas from rich resources discovered in the Eastern Mediterranean.

Many former Turkish diplomats and independent analysts agree that Ankara’s ostracizing of Cairo at a critical time in the Middle East is working against Turkey’s interests.

Retired Ambassador Suha Umar, who has served in Amman, pointed first to the irony of Erdogan’s blasting Sisi for the executions in Egypt.

“There may be moral basis to [Erdogan’s] remarks, but he himself said after the coup attempt [in Turkey] that he would willingly sign the return of the death penalty if this was brought before him,” Umar told Al-Monitor.

Umar said that historically speaking Turkey, along with Egypt and Iran, was always a player in the Middle East, a position that required Ankara to tread cautiously in its dealings in the region in the past.

“What the AKP did, however, was to start interfering in the domestic affairs of Arab countries and this lost it its regional influence,” Umar said.

“For Turkey to be at loggerheads with the region’s most influential powers is not a clever move,” he added, pointing to the strains in Turkey’s ties with Egypt, Saudi Arabia and Israel.

Umar believes that Ankara’s ties with Tehran are also not as rosy as the government is trying to present.

“By all means, criticize Egypt if you must, but do this diplomatically without harming Turkey’s interests. That is the aim of foreign policy,” Umar said.

According to political science professor Ilter Turan, from Istanbul’s Bilgi University, Egypt under Sisi prevented Turkey from establishing the “Sunni bloc” it desired in the Middle East. “Erdogan is finding it hard to come to terms with this,” Turan told Al-Monitor.

Turan added that Turkey had also expected major economic gains from Egypt after the Arab Spring but this also fell through due to Ankara’s policies. “Meanwhile, Egypt is working with Israel, Greece and Cyprus to prevent Turkey from participating in Eastern Mediterranean energy projects,” Turan said.

Turan added that because of Egypt’s influential regional position, Ankara’s relations with the Arab world were also being harmed by its ostracism of Cairo.

Underlining that Turkey has no chance of influencing events in Egypt, Turan said, “It is not clear what Turkey has gained from its current policy, but it is evident what it has lost.”