Turkey has loudly criticized the Egyptian regime, pointing to a growing competition between the two countries for prominence. 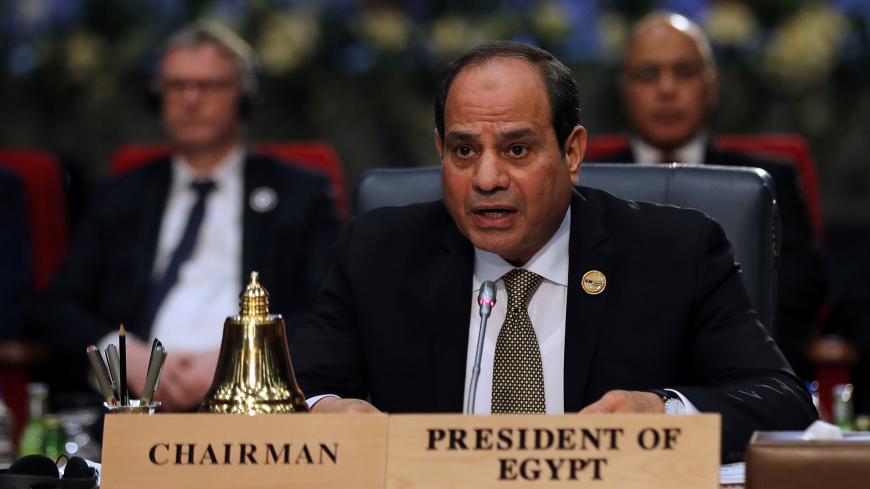 CAIRO — Turkey and Egypt, rivals for influence in the Middle East and Africa, are trading insults once again.

On Feb. 24, Turkish President Recep Tayyip Erdogan had said he would refuse to meet with Sisi — though he hadn't been invited to — and added that the Egyptian judiciary lacks integrity.

Relations between Ankara and Cairo have been tense for years, since the Egyptian army toppled Muslim Brotherhood-affiliated President Mohammed Morsi after a wave of popular protests against his rule in 2013. While Cairo considers the Muslim Brotherhood a terrorist group, Turkey hosts many of the organization’s members and considers it peaceful.

During the Munich Security Conference on Feb. 16, Sisi alluded to the Armenian massacres saying, “One hundred years ago, Egypt welcomed the Armenians after the massacres they were subjected to. They arrived to Egypt where they found security, peace and stability.”

Sisi’s statement, which angered Turkey, came as the debate between Turkey and France around using the term “genocide” was at its peak. Although Turkey acknowledges the killing of many Armenians in 1915 under the rule of the Ottoman Empire, it challenges the number of victims and refuses to use the term genocide.

Although the tension between Egypt and Turkey isn't new, it's intensified during the past couple of years as Sisi works to restore Egypt's regional power and authority. Their competition for influence has been evident, especially with the latest request from the Syrian Democratic Forces (SDF) addressed to Egypt.

On Feb. 17, the Kurdish-led SDF asked for Egyptian intervention as a counterplan to the buffer zone Turkey wants to establish at the Syrian border. Riad Darar, co-chairman of the Syrian Democratic Council (the SDF's political arm), told the Syrian Observatory for Human Rights in Coventry, England, that the council is trying to arrange a visit to Egypt because it considers Cairo a potential safety net against Turkey's threats. Cairo, however, has yet to respond to the requests.

Turkey views the Kurdish People’s Protection Units (YPG), the main SDF component, as an extension of the Kurdistan Workers Party (PKK), which it considers a terror organization.

Meanwhile, in the Mediterranean Sea, Egypt has built up its ties with Cyprus and Greece. The three countries have agreed on the demarcation of maritime borders since 2013. Sisi also has met with Greek and Cypriot leaders more than seven times since he took power. The latest meeting came during an October tripartite summit held in Greece where the leaders discussed maritime security in the Mediterranean and petroleum excavation.

Tension has been brewing among Turkey, Greece and Cyprus in the eastern Mediterranean amid attempts to invest in natural gas. Greece supports the internationally recognized Cyprus, while Turkey backs what it calls the Turkish Republic of Northern Cyprus.

Last year, Turkey rejected the legitimacy of a maritime demarcation deal signed between Egypt and Cyprus in 2013. Turkey has banned Cyprus from conducting petroleum and gas excavations in the Mediterranean. This is what pushed Egypt to warn Turkey in February 2018 against tampering with its economic rights in the Mediterranean.

Tamer al-Shahawi, a member of the Egyptian parliament's Defense Committee, considers the regional power race between Egypt and Turkey to be one of the most pressing matters at this time. Shahawi, who is also a former intelligence officer, told Al-Monitor that Cairo has been isolated from regional leadership since the Egyptian revolution in 2011 and is now trying to re-establish its authority.

Turkey has tried to block Egypt from the regional equation, he said. The Turkish president has on several occasions asked the international community to boycott Egypt, calling Sisi an “illegitimate tyrant.”

Shahawi explained that Sisi’s allusion to the Armenian genocide was a reminder of how dangerous Turkey’s expansion could be. He pointed out that after Egypt carried out the nine executions, Erdogan denounced the EU for attending the first Arab-EU summit, held Feb. 24 in Sharm el-Sheikh.

Shahawi added, “We are trying to have regional allies, to re-establish our regional influence.” He said that, in addition to Turkey and Egypt, the regional power extends to Iran and Saudi Arabia. He believes Saudi Arabia doesn't have the kind of political and military elements needed for general regional influence, as Egypt does.

Egypt rejected Turkey's intervention in Syria. Cairo is unlikely to get its military involved even if the Kurds ask for it, Shahawi added. Yet he didn't exclude the possibility that Cairo would offer political cooperation with the Kurds, as long as it serves Egyptian national security.

Orabi, a former foreign affairs minister, told Al-Monitor that Turkey seeks to restore the Ottoman Empire and that Egypt is the only country that can impede this plan, as it has one of the region’s strongest armies and the largest Muslim population in the region. Orabi added that even though the Arab world doesn't support Turkey's expansion dreams, Egypt still finds them concerning.

The presence of Turkish forces in Iraq, Syria and Qatar, Orabi said, comes at the expense of Egypt’s power in the region. When it comes to military intervention, Orabi stated, “Egypt will not be implicated in any tactic. It would only get involved at a greater strategic scale.”

He noted that in 2017, Turkey opened a military base in Somalia, a country Egypt considers part of its national security plan.

Orabi said Turkey’s recent provocation of Egypt regarding the Arab-EU summit is a sad attempt to smear Cairo’s international reputation after Turkey’s failure for years to become an EU member state.

Bashir Abdul Fattah, a researcher at the Cairo-based Al-Ahram Center for Political and Strategic Studies, highlighted the timing of Turkey’s remarks. The comments came soon after Egypt succeeded in holding the Mediterranean Gas Summit on Jan. 14 and hosted the first Arab-EU Summit on immigration and anti-terrorism policies.

“Egypt’s capacity to successfully hold such summits earns it international trust, while Turkey is losing all the expansionist ideas it has bet on," Abdul Fattah told Al-Monitor.

He noted that Egypt has also negotiated several truces between Syrian factions through direct dialogue with the opposition and the government. Meanwhile, Turkey hasn't achieved any advances with the Kurdish factions.

“There is a competition on regional roles, and every advance Egypt makes is considered a point of failure for Turkey," he added.