Islamists and secularists alike want Turkey to stay out of the Iranian-Saudi conflict. 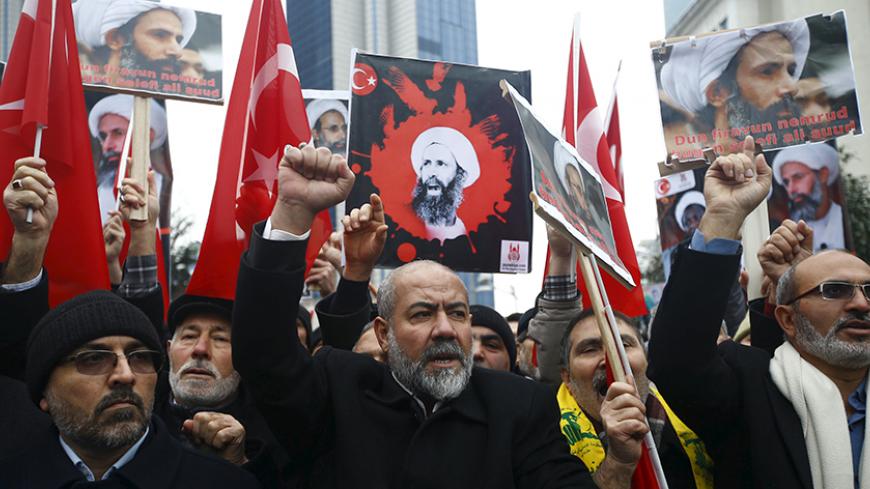 Rising tensions between Saudi Arabia and Iran have put Turkey’s ruling Justice and Development Party (AKP) on the spot again, providing a fresh example of how its Islamist/Sunni-driven “strategic plans” for the Middle East can be undermined by unforeseen developments.

Pressure began building after the Saudis beheaded 47 prisoners, including popular Shiite cleric and critic Nimr al-Nimr, on Jan. 2. This latest, and to date most dangerous, crisis between Saudi Arabia and Iran began only days after President Recep Tayyip Erdogan visited Riyadh for talks with King Salman bin Abdul-Aziz Al Saud aimed at increasing cooperation on regional issues, most notably on Syria.

Erdogan’s visit was crowned by the establishment of a “Strategic Cooperation Council” between the two countries for that purpose.

The trip followed Ankara’s decision to participate in the Saudi-led Islamic Military Alliance announced in mid-December by Saudi Foreign Minister Adel al-Jubeir. Turkish Prime Minister Ahmet Davutoglu said after the Saudi announcement that Turkey looked “favorably” on the alliance, which he characterized as “a step in the right direction by Islamic countries.” He said the alliance will counter efforts to correlate Islam and terrorism.

The composition of the 34-nation alliance, however, has led some analysts to see it more as a Sunni coalition through which Saudi Arabia aims to check and reduce Iran’s regional influence.

Providing a rare example of concurrence, Turkey's decision to join the coalition has elicited criticism from both secularist and Islamist commentators in Turkey, who are now warning the government against becoming embroiled in the dispute between Riyadh and Tehran.

All these developments also come at a time of tension between Turkey and Iran over Syria, where they support opposing sides. Iranian President Hassan Rouhani criticizes Sunni powers, especially Saudi Arabia but including Turkey, for supporting forces fighting against the regime of Syrian President Bashar al-Assad.

"Does the destruction of Syria lead to the strengthening of Turkey, Jordan, Saudi Arabia, Qatar, the United Arab Emirates or other countries? Who is pleased by Syria's destruction, other than Israel?" Rouhani said during a Dec. 21 news conference in Tehran.

Erdogan in turn accused Iran of again fomenting sectarian divisions in the region by supporting Assad. “If Iran did not stand behind Assad for the sake of sectarian gains, maybe we would not be talking about Syria today,” Erdogan said during a Dec. 27 speech in Istanbul.

Turkey and Saudi Arabia have been at odds over Ankara’s support for the Muslim Brotherhood and Riyadh’s backing of the military coup in Egypt in 2013, which toppled President Mohammed Morsi. Istanbul and Riyadh have, nevertheless, found room for agreement in Syria in recent months, especially after the death of Saudi King Abdullah bin Abdul-Aziz Al Saud in January 2015.

Both Turkey and Saudi Arabia are deeply unhappy that Assad is still in power and are lukewarm toward Moscow and Washington’s decision to open a place at the table for the Assad regime in efforts to resolve the Syrian crisis.

Given this general backdrop, the Saudi side undoubtedly expected Turkey to support it in its dispute with Iran. However, Turkey unexpectedly found itself in a difficult position: It does not want to openly antagonize Iran, with which it maintains crucial energy ties, despite the antipathy it may feel toward the country.

Ankara’s ambivalence was made apparent by its inability for three days to issue a statement about the execution of Nimr and the attacks against Saudi diplomatic missions in Iran by angry protesters.

When the statement finally came, it was noted that Turkey was trying to place itself in a diplomatically safe middle ground, which was unlikely to please either Tehran or Riyadh. Talking to reporters after a Cabinet meeting Jan. 3, Turkish Deputy Prime Minister and government spokesman Numan Kurtulmus called on both countries to de-escalate the tension. The dispute, he said, could have dire consequences for the region, which “already resembles a powder keg.”

The statement by Kurtulmus, however, did not do away with Ankara’s ambivalence regarding the crisis. A written statement issued by the Foreign Ministry after Kurtulmus’ remarks accused Iran and apportioned no blame to Saudi Arabia. This appeared to be an attempt at appeasing Riyadh after Kurtulmus’ remarks. “We are concerned about the attack against Saudi Arabia’s diplomatic missions in Iran,” the statement said, going on to indicate that these attacks were “unacceptable.”

Calling on the two countries to “return to the language of diplomacy,” the Foreign Ministry statement made no reference to the execution of Nimr, despite the prevalent view in the international community that this was a provocative and unnecessary act that will only increase sectarian tensions in the Middle East.

There was, however, little backing for Saudi Arabia among Turkey’s pro-government Islamist supporters, thus revealing that little love is lost among Turkish Islamists for the Saudi regime and the Wahhabi interpretation of Islam on which it is based.

The fact that AKP supporters feel an affinity for the Muslim Brotherhood and have abhorred Riyadh’s hostility toward the group is also a key factor that determines the view of Turkish Islamists toward Saudi Arabia.

This was apparent in a commentary by Akif Emre, a prominent columnist for the pro-government daily Yeni Safak. Emre asked derisively in his column how it was that Saudi Arabia had "become the lead of the Sunni world and the representative of the majority of Muslims in the world,” and went on to argue that the crisis between Riyadh and Tehran is not based on sectarian considerations.

“The picture we have today, which gives the impression of being centered on sectarianism, is only one product of the different dimensions the regional war for influence has taken on,” Emre wrote, going on to argue that Riyadh executed Nimr to create “controlled tensions” in the region.

Emre also blasted the Saudi-led Islamic alliance against terrorism. “The fact that the Saudis have set up a coalition against the Islamic State, which itself is the product of the Saudi ideological approach, is a strategic irony,” he wrote.

Maintaining that Riyadh is trying to establish a bloc for itself composed of non-Shiite powers, Emre said, “Turkey should not fall into the lap of this alliance” or take sides in the rivalry between Saudi Arabia and Iran.

Murat Yetkin, the staunchly secularist editor-in-chief of Hurriyet Daily News and a columnist for the daily Radikal, also cautioned against taking sides in the dispute. The surprise here is not in Yetkin’s views, but in seeing a secularist and an Islamist columnist in a rare moment of agreement.

“The idea of a Saudi-led alliance against terrorism perpetrated in the name of Islam was a bad idea from the start,” Yetkin wrote in his Radikal column. “It is not right for Turkey to be part of an alliance led by one of the most oppressive regimes in the world,” he added, calling on Davutoglu to keep Turkey out of the Sunni-Shiite rivalry being spearheaded by Riyadh and Tehran.

Whatever the AKP’s intentions may be in cozying up to Saudi Arabia, they remain on hold now because of the Saudi-Iranian conflict — which also shows yet again that Ankara’s regional plans are ultimately at the mercy of the unpredictable ways of this part of the world.