Following the visit of a Turkish delegation to Saudi Arabia, the kingdom hopes to establish economic and military ties with Turkey to counter the expanding Iranian influence in the region. 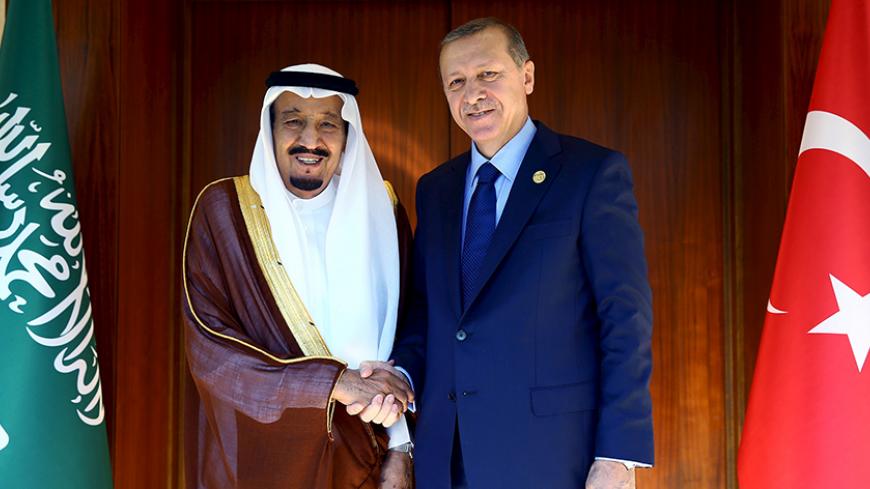 Saudi Arabia and Turkey have agreed to form a Strategic Cooperation Council to coordinate and develop relations between the countries in terms of economic, political, defense, security, education and health issues. The countries also are discussing military cooperation, especially with regard to Syria.

Following the meeting between the Saudi king and Davutoglu, Saudi Foreign Minister Adel al-Jubeir and his Turkish counterpart announced that officials had agreed to implement the Strategic Cooperation Council.

“We will sign [the agreement] in the future and appoint two joint presidents for the council,” Jubeir said. The meeting followed up on discussions in December, when Turkish President Recep Tayyip Erdogan visited Saudi Arabia.

The final signing of the council agreement is scheduled during Salman's visit to Turkey to participate in the Islamic summit, which is held every three years. The summit’s 13th session will be held in Istanbul from April 10-15 under the auspices of the Organization of Islamic Cooperation, which was established in September 1969 and includes 57 member states on four continents.

The royal palace in Riyadh welcomed Davutoglu with a luncheon by Salman in the presence of senior Saudi officials, including Saudi Crown Prince Mohammed bin Nayef. The crown prince had visited Ankara in April 2015 a few hours before Erdogan’s visit to Iran, so as to brief Erdogan on Tehran’s security interventions in the Gulf and military interference in Yemen.

The lunch also included the Saudi defense minister and chairman of the Council for Economic and Development Affairs, Deputy Crown Prince Mohammed bin Salman, who later held a meeting with Davutoglu, given that the deputy crown prince is responsible for the military and economic affairs in Saudi Arabia.

These developments reflect the interest of Saudi Arabia in establishing a strategic partnership with Turkey, which has shown the initiative to achieve a greater understanding with Riyadh on several political issues with regard to Yemen and Syria. Turkey also agreed to join the military anti-terrorism Islamic coalition declared by the Saudi minister of defense in December.

Conversely, the government of Egyptian President Abdel Fattah al-Sisi did not offer the support Riyadh sought in several political and military stances with regard to Syria, Yemen or Iraq; observers said this reflects Egypt's ingratitude for the kingdom’s support of the Egyptian economy in terms of funds and oil. Saudi Arabia provided more than $8 billion worth of aid to Egypt in 2013 and 2014.

It seems that the Turks are more willing and able — albeit not by receiving any direct financial aid from Saudi Arabia — to show solidarity with the Saudis, starting with Erdogan, who made a scathing criticism of Iran, accusing it of executing a large number of people, during his speech in January against the backdrop of the attacks on the Saudi Embassy in Tehran. Erdogan previously accused Iran of seeking to dominate the region in an interview with France 24 in March 2015, declaring his support for the Saudi-led military campaign in Yemen.

This is not to mention Davutoglu’s criticism of Iran’s behavior with its Arab neighbors during his interview with Al-Arabiya channel Feb. 3, although he described Iran as a friendly and neighboring country to avoid raising Tehran’s ire; there is $14 billion in trade between Turkey and Iran.

Moreover, the Turkish Foreign Ministry summoned the Iranian ambassador to Ankara on Jan. 7 to protest Iranian media outlets that had linked Erdogan’s recent visit to Saudi Arabia and Riyadh’s death sentence against Shiite Saudi cleric Sheikh Nimr al-Nimr. This is not to mention the Iranian media accusing Erdogan of previously being aware of Riyadh’s decision and of coordinating with Saudi authorities to implement the death sentence against Nimr. These accusations came in response to Erdogan’s statements that the death sentence is a Saudi internal affair.

During his visit to Riyadh, Davutoglu, during his meetings with a number of Saudi businessmen, was keen to persuade them to increase the size of their investments in Turkey.

Turkey seeks, through its new cooperation with Riyadh, to increase Saudi investment in Turkey, which currently amounts to about $2 billion — namely in real estate and other activities such as industry, tourism and energy — to $25 billion by 2023.

Ankara also seeks to obtain a bigger share of development projects in Saudi Arabia to the benefit of 200 Turkish companies operating in the field of construction and contracting, whose investments reached $1 billion during 2015.

According to a report by Al-Hayat newspaper Jan. 11 quoting sources from the Saudi Ministry of Housing and Turkish sources, a group of Turkish companies would land contracts with the Saudi Housing Ministry for the construction of residential units with an area of 300 million square meters (3.2 billion square feet); while the value was not confirmed, there were reports that it could be as much as $240 billion.

Turkey is characterized by its strategic location linking Europe and Asia and its growing and diversified economy under the rule of the Islamic Justice and Development Party (AKP). The AKP has implemented an economic program designed to reduce imports, focusing on producing and exporting local products based on local raw materials and establishing international business partnerships with Europe and oil-rich countries in the Middle East.

This is not to mention Turkey’s military power, as it has the second-largest army in NATO with 670,000 soldiers, following that of the United States.

Saudi Arabia is anxiously looking at Iran’s growing power and influence in the Arab region following the relief of international sanctions by Europe, the United States and the International Atomic Energy Agency, not to mention lifting the ban on its oil exports, which allowed it to restore half of its frozen assets abroad, amounting to $100 billion.

In this context, Riyadh is turning toward Sunni-dominated Ankara, considering that the close economic, security and military ties have become a strategic need to protect the security of the Gulf and reduce the risk of Iranian influence in the smoldering Arab areas such as Iraq, Syria and Yemen.

Despite the expected benefits on the political and military levels after the cooperation agreement is enacted, and despite the AKP’s positive stance and support of Saudi Arabia and its genuine endeavor to promote cooperation between the two countries, Saudis who are banking on any foreign military and economic alliances should be realistic and cautious in their optimism.

This is especially true since the Turkish government might be powerful and capable inside Turkey, but is not very likely to demonstrate the same influence and power abroad as the Saudis wish — given Turkey’s economic considerations with Iran, and for military reasons, as it is a member of NATO, not to mention the security reasons in light of the battle with armed Kurdish groups at home.

Decision-makers in Riyadh first ought to trust their citizens and enlist those who are willing in the army to increase the armed forces, currently amounting to 233,000 soldiers. However, this number is no longer sufficient for Riyadh, which is currently engaged in different military operations in Yemen and Bahrain, and potentially in Syria and other countries.

Saudi Arabia also ought to take necessary measures in this regard so it will not have to seek help from abroad, especially with 651,000 unemployed people in the kingdom, according to 2014 official statistics. The kingdom also needs a national project to face the Iranian one, as no economic reform can be achieved without real political reforms ensuring the participation of citizens in power and wealth management.