Grappling with serious economic woes, Turkey is seeking to normalize ties with Saudi Arabia, but some of its fence-mending have badly backfired. 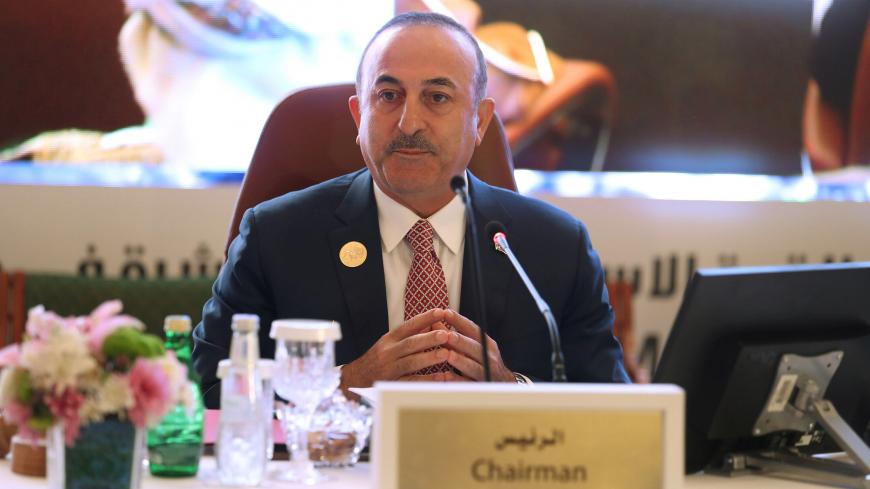 Foreign Minister of Turkey Mevlut Cavusoglu is seen during a preparatory meeting for the GCC, Arab and Islamic summits in Jeddah, Saudi Arabia, May 29, 2019. - REUTERS/Hamad I Mohammed

Turkey has taken a number of recent steps that can be seen as efforts to normalize ties with Saudi Arabia: the foreign minister’s attendance of the Islamic summit in Mecca, President Recep Tayyip Erdogan’s Eid al-Fitr phone call to King Salman and Ankara’s condemnation of the Houthi attack on the Saudi Abha airport. It's a good start, but the relationship remains shaky amid the moves that have badly backfired.

For Turkey, a continued flow of capital from the Gulf is crucial at the moment, with its ailing economy facing new threats of US sanctions due to Ankara’s insistence on procuring a Russian air defense system. Moreover, the continuation of open enmity with Saudi Arabia and the United Arab Emirates poses fresh hardships to Turkey’s moves in the Middle East and Africa.

Erdogan knows he needs to break this vicious circle, but the Saudis have an expectation from Turkey – to see it in their “family photo” against Iran – in addition to two conditions, namely that Turkey should review its support for Qatar and stop protecting the Muslim Brotherhood.

For much of the Justice and Development Party’s (AKP) 17-year rule, Ankara has held Riyadh in high esteem. The AKP got off to a good start in 2006 when King Abdullah visited and signed six agreements with Turkey. Bilateral ties acquired a military dimension in 2013, with Saudi pilots training in central Turkey and Turkey participating in military drills in the Gulf. Relations moved toward “strategic cooperation” in 2015 when Erdogan and King Salman signed an accord in Riyadh. The following year, the two sides agreed to create a bilateral coordination council.

In the meantime, Turkey and Saudi Arabia became partners in a quest to topple Bashar al-Assad’s government in Syria, even as the two disagreed over the Muslim Brotherhood. Erdogan was furious with the Saudis for financing Abdel Fattah al-Sisi, who ousted the Brotherhood government in Egypt in 2013. Yet Erdogan set his anger aside to preserve bilateral ties. While maintaining the partnership in Syria, he backed the Saudi-led military campaign in Yemen and pleased Riyadh with harsh outbursts against Iran, which often posed obstacles to Turkish moves in the Middle East.

Soon, however, Turkey joined Russia and Iran in the Astana process, diverging from the Saudis in Syria. Differences emerged also on Libya and Sudan. Bilateral ties derailed in 2017 as Turkey shielded Qatar against the Saudi-led blockade and sought to protect the Muslim Brotherhood. Finally, the killing of Saudi journalist Jamal Khashoggi at the Saudi Consulate in Istanbul last year blew everything up.

Ankara blamed the murder and the general downturn in ties on Crown Prince Mohammed bin Salman, setting the king apart from his son and hoping that international pressure on Riyadh would cause some internal shifts that would block the crown prince’s accession. This, however, did not materialize. Remarkably, Turkey’s pro-government media have recently shifted their focus from the Saudi crown prince to Abu Dhabi's crown prince, Mohammed bin Zayed, portraying him as the actual bad guy fomenting enmity against Turkey. This seems to have not worked either, for Saudi officials and the Gulf media have sustained a campaign to exact an economic price from Turkey.

On May 17, the Saudi Embassy in Ankara warned Saudi citizens against foul play in Turkey’s real estate sector, citing complaints about fraud, missing title deeds and mortgage-restricted titles. Real estate is one of Erdogan’s priority sectors, especially as a channel to attract foreign investment. In the past five years, Saudis bought more than 10,600 of the 122,000 homes sold to foreigners in Turkey, only second to the Iraqis.

In a similar warning a few days later, the head of the Riyadh Chamber of Commerce and Industry, Ajlan al-Ajlan, said cases of fraud and harassment against Saudi tourists in Turkey had increased. He charged that Turkish authorities had failed to protect Saudi investors, warning that investing in and visiting Turkey had become risky.

Okaz daily published a column in late April titled “Do not go to Turkey,” which spoke of swindle and mistreatment of Saudi tourists in Turkey. The same daily later reported that Saudi businesspeople were suffering big losses in Turkey and were beginning to withdraw their investments.

On social media, Saudi calls for a boycott of Turkish goods abound. In May, a prominent prince joined the calls by posting a video of the governor of Riyadh, Prince Faisal bin Bandar, refusing a cup of Turkish coffee.

Amid the fierce media war, Yasin Aktay, a senior adviser to Erdogan, penned an open letter to King Salman in his column in Yeni Safak daily in late May. “Turkey is not an enemy of Saudi Arabia. … You will not be harmed by Turkey,” he wrote. Though the letter was intended as an olive branch, it only fanned Saudi anger as Aktay drew a line between the king and the crown prince, accused the Saudi religious establishment of “adding fuel to the fire of disorder” and noted a “tragic contradiction” between wealthy Saudi royals and impoverished Muslims across the world. Moreover, referring to claims in the Qatari media that Riyadh was about to execute several scholars, he argued that by going ahead with such a move the king would only harm himself.

An Arab source who requested anonymity told Al-Monitor that Aktay’s piece was perceived as “a semiofficial letter” and caused “a great deal of annoyance” in Saudi Arabia. “He is preaching to the king in a letter based on a lie. It is an ill-minded approach,” the source said. “The Saudi government chose to refrain [from a public reaction] so as not to overshadow the Mecca summits.”

Aktay said in a later interview, “Despite all problems, we are trying to create the conditions for dialogue. We are not adversaries. On the contrary, we stand by Saudi Arabia in the face of any threat against them … be it from Iran or the United States.”

Yet a second communication incident occurred at the Organization of Islamic Cooperation's summit in Mecca, during which Turkey turned over chairmanship of the organization to Saudi Arabia. Erdogan shunned the summit, sending Foreign Minister Mevlut Cavusoglu to undertake the transfer of power.

According to the Arab source, the Saudis “took note” of Erdogan’s absence from the meeting, at which they sought to rally support against Iran. “King Salman wanted to see Turkey by his side against Iran and expected Erdogan to attend. Erdogan, however, did not go in order to avoid displaying a stance against Iran,” the source said. “He phoned the king on the [Eid al-Fitr] holiday to make amends, but I don’t think this has made up for anything.”

In sum, Erdogan’s efforts to maintain bilateral ties while putting contentious issues aside are no longer working. Riyadh expects Turkey to review its stance on Qatar and the Muslim Brotherhood and make a gesture regarding Iran.

While a change in attitude toward Qatar and the Muslim Brotherhood cannot be ruled out, Iran has become a delicate foreign policy issue for Ankara. It seeks coordination with Tehran in its expanding military moves against Kurdish militants at the border with Iraq, in addition to the need for partnership in Syria, where the Kurdish quest for self-rule is considered a threat to Turkish national security. Ankara could ill afford to return to rivalry with Tehran before it achieves some progress in Syria.

Moreover, Turkey has no interest in falling out with Iran — with which it shares the most stable of its borders — at a time when its US and European ties are on the rocks. This, of course, does not mean Turkey is fine with Iran’s growing influence in the Middle East. Yet Turkey has seen that sharp rivalry with Iran amounts to its exclusion from the regional game — the very reason that forced it to amend its approach in the first place.