As Turkey gets more into the Syrian swamp, the Syrian spillover into Turkey could turn into a flood. 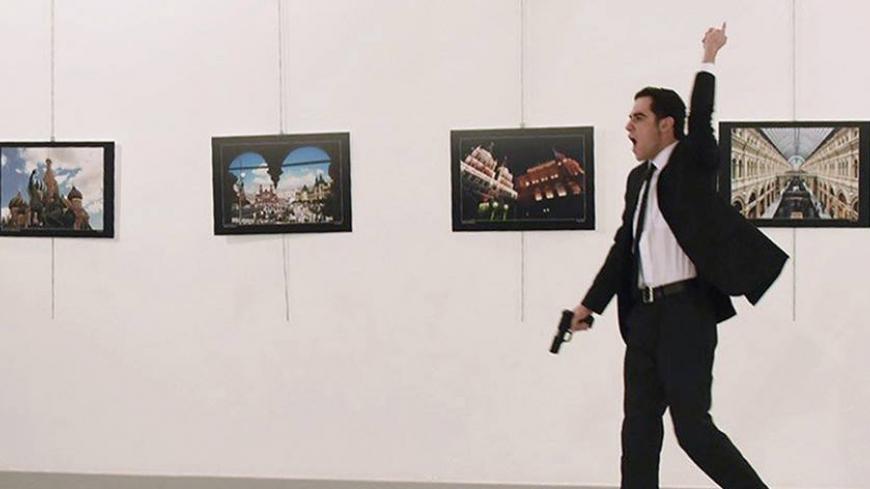 Mevlut Mert Altintas, the policeman who killed Russia's ambassador to Turkey, holds his weapon and speaks after the attack at an art gallery in Ankara, Dec. 19, 2016. - YAVUZ ALATAN/AFP/Getty Images

Turkey was dizzy with the twin bombings that rocked the city center of Istanbul on Dec. 11 and took 45 lives. Before recovering from that trauma, the country was shaken again in less than a week with another terror attack. This time the target was off-duty soldiers in the central Anatolian province of Kayseri. Fourteen people were killed and some 55 wounded.

It is not difficult to assume from the remarks of Murat Karayilan, the PKK’s military head, that the Kurdish insurgent organization at least endorses both bombings. Karayilan blamed Turkey's ruling Justice and Development Party (AKP) for the attacks, accusing it of resuming the fight between Turkish government forces and Kurdish militants. “The Commando Brigade in Kayseri is the one that committed most of the massacres in Kurdistan … that tortured the Kurdish people in Hakkari and Cizre!” Karayilan told the pro-Kurdish Firat news agency in an apparent endorsement of the attacks.

In the meantime, an increasingly demoralized society was shaken by a third terror attack, where the Russian ambassador to Ankara was assassinated. A young policeman who was a member of a rapid deployment unit — which is supposed to provide security to officials and foreign diplomats — shot Andrei Karlov to death. Karlov is the first Russian ambassador to be killed in a NATO-member country.

According to footage that went viral on social media, the assassin first shouted “Allahu akbar” (God is great) and recited lines from the Quran in Arabic, then said, “Do not forget Aleppo! Do not forget Syria! … Everyone who has taken part in this oppression will one by one pay for it.”​

Turkish authorities, without losing a beat, turned to what has become their common measure after every terror incident and blocked Twitter and ordered a media blackout on the issue. This was followed by cliche statements where government officials condemned the terror and said that terrorism could not divert Turkey from its course and that the criminals will be severely punished, and so forth. Officials were quick to declare that the killing of the Russian ambassador was “a provocation aiming at undermining the increasing cooperation and good relations between the two countries.”

Whoever committed the two terror acts in Istanbul and Kayseri and whatever the reason behind the assassination of the ambassador, there is no doubt that Syria is the major source of mounting terror in Turkey.

Right after the Istanbul bombing, and at the time of the attack in Kayseri, I was in the Kurdistan Region of Iraq at a conference that gathered high-level Kurdish officials and international figures, including Bernard Kouchner, the former French foreign minister, Zalmay Khalilzad, the former US ambassador to Afghanistan and Iraq, and Peter Galbraith, whom many consider to be the most experienced American expert on the Kurds. The days I spent in the Kurdistan Region of Iraq coincided with the fall of Aleppo to the Syrian regime under the intense Russian bombardment of the eastern part of the city where the rebels had their last pockets of resistance. For the international Middle East experts, the outcome of the Aleppo campaign is brief and simple: The Syrian war was mostly about the western part of the country, and the war has effectively been ended by the fall of Aleppo and has been won by the regime.

Naturally, this doesn’t mean that the “Syria question” is resolved. For a solution, one has to wait and see what sort of path President-elect Donald Trump will follow.

Kurdish experts had a bit more elaborate view concerning the Aleppo campaign and its conclusion, saying what has been achieved in Aleppo is an outcome of a deal reached between Russian President Vladimir Putin and Turkish President Recep Tayyip Erdogan. Under this alleged deal, Turkey was to effectively cease its support to the rebels, preventing them from putting up strong resistance to Russia, Iran, Lebanese Hezbollah and the regime forces that were about to complete the siege of eastern Aleppo. In turn, Russia was to turn a blind eye to Turkish military moves to capture al-Bab, the strategically located Syrian town to the east of Aleppo; this would deal a lasting blow to Kurdish aspirations to link the cantons in northern Syria controlled by the Democratic Union Party (PYD) and the People's Protection Units (YPG).

Some Kurdish leaders defined the deal between Turkey and Russia as “Aleppo for al-Bab.” This means that Turkey would withdraw its support from rebels in eastern Aleppo and Russia would accept Turkey’s entry to al-Bab, which is still under the control of the Islamic State. According to my Kurdish sources, Russian acquiescence to the Turkish takeover of al-Bab is conditional: After Turkey prevents the emergence of a “Kurdish corridor” in northern Syria, it would hand over al-Bab to the Syrian regime.

In Kurds' eyes, “Erdogan’s sell-out of Aleppo” is in return for a Russian “green light” to Turkey’s free hand in dealing with the Syrian Kurds. This first sounded to me more like a theory than a fact on the ground, but only four days later, it was interesting to read the following lines by Max Fisher in the New York Times:

“The two countries appeared to settle on an unofficial deal: Turkey would drop its support for certain rebels who threatened Russian interests in Syria, and Russia would drop its support for Syrian Kurdish groups.” Fisher said Aaron Stein “​of the Atlantic Council called the arrangement ‘Aleppo for Al Bab’: Russia and Mr. [Bashar al-] Assad would take Aleppo, while Turkish-allied militias would take the strategically located town of Al Bab.'”

If the return of Aleppo to the regime really has a backdrop of a Russia-Turkey deal, this could worry the Syrian Kurds more than ever. With an unpredictable Trump to take the helm in Washington within a month and because of their quasi-hostile relations with the Kurdistan Regional Government in next-door Iraq, Syrian Kurds might be the biggest loser in the period to come.

There are some in the region who see the escalation of violence in Turkey in terms of redressing the balance of power in Syria. In this regard, Turkey is chosen as the weakest of the involved actors of the Syrian equation. Turkey’s weakness is apparently manifested by its growing dependence on Russia. It appears that the assassination of the Russian ambassador, more than impairing the relationship, may be pushing an embarrassed Turkey more into the Russian fold, at least in the short term.

This situation Turkey finds itself in is, more than anything else, of Turkey’s own making. A European ambassador in Baghdad shared his astonishment about Erdogan’s policy in Syria with me. “It is unbelievable and inconceivable that Turkey is waging a war on multiple fronts in Syria and expecting to defeat all three [foes] — the Assad regime, Daesh [Islamic State] and the Kurds — relying on its rapprochement with Russia. It is an unwinnable war. It is impossible,” he said.

It seems that this “impossible war,” with its many fronts being waged simultaneously, has invited the violence generated in Syria into Turkey. As much as Turkey is getting into the Syrian swamp, the Syrian spillover into Turkey could turn into a flood.