What Turkish raid on Syrian Kurds means for Ankara-Washington ties

Turkey's decision to launch airstrikes on fighters for the Kurdish People's Protection Units in Syria could have a major impact on Washington's efforts to balance relations with Ankara. 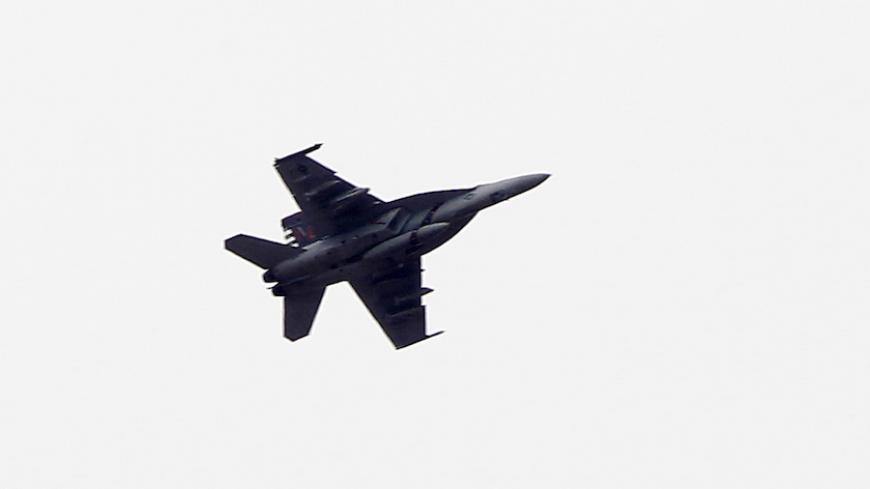 A fighter jet flies above the Syrian town of Kobani on Oct. 19, 2014, in Sanliurfa, Turkey. - GETTY/Gokhan Sahin

Turkish jets pounded US-backed Syrian Kurdish-led forces during the early hours of Oct. 20 in an apparent attempt to prevent them from establishing a long-coveted corridor to link up territories under their control in northern Syria. The Turkish attacks follow sustained threats from President Recep Tayyip Erdogan to take further action against the People’s Protection Units (YPG), which are closely linked to the Kurdistan Workers Party (PKK).

The airstrikes will likely further complicate Washington’s efforts to balance its relations with Turkey, a key NATO ally, and the YPG, which remains the US-led coalition’s most effective partner against the Islamic State (IS) in Syria. The YPG’s continued attempts to expand its territory in defiance of US warnings to stay put have not helped.

The Turkish army said that as many as 200 YPG militants were killed in the strikes, which targeted areas recently captured by the YPG as it continued its advance eastward toward the IS-held town of al-Bab. The YPG disputed these figures, claiming that no more than 10 fighters were killed. The London-based Syrian Observatory for Human Rights said 11 YPG fighters had died in the overnight sorties, which followed sustained Turkish artillery attacks against the Kurdish-controlled enclave of Afrin. There are conflicting reports as to whether the targeted group were YPG proper or a group affiliated with them.

Nilufer Koc, co-chair of the pro-PKK Kurdistan National Congress, said in an Oct. 20 statement that two villages had been shelled, killing four civilians and injuring dozens, “hours after their liberation from [IS].”

A YPG commander in Syria told Al-Monitor on condition of anonymity, “We will be watching very closely who reacts and how,” in a reference to the United States and Russia, both allied with the YPG in Syria.

In recent weeks, al-Bab has become the focus of intense competition between Turkish-backed Syrian rebels and the YPG because of its strategic location at the intersection of opposition-held areas north of Aleppo and Kurdish-held areas to the east and west of the town. The rebels, the YPG and Syrian regime forces positioned to the south are now all within striking distance of al-Bab.

If the YPG succeeds in capturing al-Bab, it will be able to link Afrin with Kobani and Jazeera, the two contiguous administrative areas, or cantons, under its control. Turkey has declared establishing such a link a “red line.” In August, Turkish troops moved into northern Syria to wrest control of its borders from IS, but above all, to torpedo the Syrian Kurds’ plans to connect the cantons.

The strikes mark the second time Turkey has attacked the YPG from the air, raising interesting questions about Ankara’s relations with Russia and with the Syrian regime. YPG sources who spoke to Al-Monitor on condition of anonymity said Turkey is unlikely to have initiated the strikes without informing Russia, whose planes effectively control the skies over northwestern Syria. Russia and Turkey are on opposite sides of the Syrian conflict, but Ankara’s fears of the emergence of a PKK-run Kurdish entity along its borders appear to have surpassed its desire to overthrow President Bashar al-Assad. This is one of the main reasons Turkey was so keen to patch up ties with Russia, and some claim with Damascus, after downing a Russian jet over the Syrian border last year.

It is widely assumed that Turkish troops launched Operation Euphrates Shield with Russia’s assent, but Moscow is also said to have made it clear that it would not permit Turkish-backed rebels to take al-Bab, because it would threaten regime defenses in Aleppo.

Russia’s position remains unchanged. YPG sources speculate that Moscow gave the green light for Turkish airstrikes to prevent their forces from moving on to al-Bab. In exchange, Erdogan assured Russian President Vladimir Putin in an Oct. 19 telephone conversation that he would help eject Jabhat Fatah al-Sham, the jihadist group formerly known as Jabhat al-Nusra, from Aleppo. Whether he will, or even can, remains unclear.

Turkey is also threatening to take unspecified military action in Mosul, where a critical campaign to free the city from IS is underway. As in Syria, Turkey’s most likely target would be the PKK, which has several hundred fighters in Sinjar, a mainly Yazidi-populated area west of Mosul.

Russia clearly benefits from any Turkish move that deepens the rift between Ankara and Washington. Turkey’s attacks against the YPG will have certainly helped to achieve that goal.