Why is Turkey so focused on Syria's al-Bab?

From a military point of view, al-Bab is a strategically unimportant town in the Syrian conflict, but that hasn't stopped Turkish President Recep Tayyip Erdogan from obsessing over the town's liberation from the Islamic State. 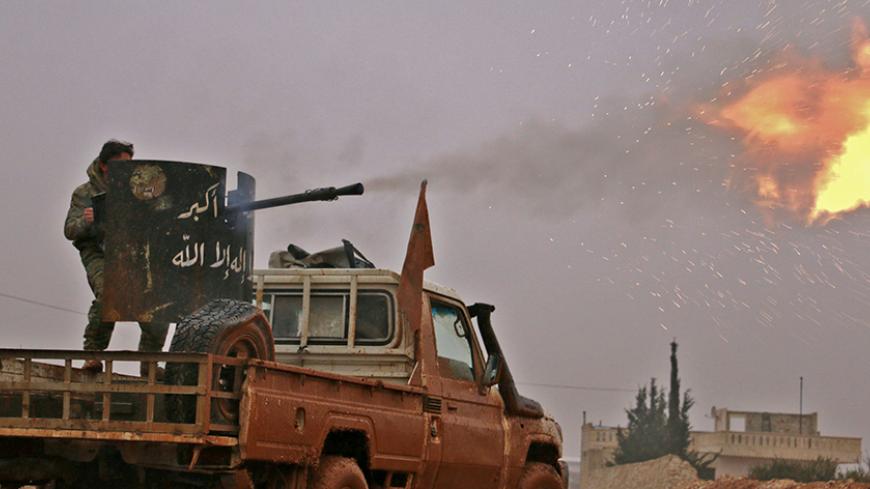 Al-Bab means “gate” in Arabic. It is also a name for a relatively small town in Aleppo province. Al-Bab is located 40 kilometers (25 miles) northeast of Aleppo, 30 kilometers (19 miles) south of the Turkish border, and it had a population of 63,069 in 2004 who were mostly Sunni Muslim Arabs.

From the military point of view, this strategically unimportant town has become the location where the Turkish army has suffered heavy casualties. The casualties inflicted upon the Turkish Armed Forces has surpassed those of the Americans and Russians, who had militarily engaged much earlier than Turkey and in a much wider zone.

The difficulties faced by the Turkish military led President Recep Tayyip Erdogan to accuse the United States and the coalition of supporting terrorist organizations. Speaking in Ankara, he said, “We have now encircled the terrorist Daesh [the Islamic State (IS)] from all four sides at al-Bab. The coalition sources, unfortunately, are not keeping their promises. Even in that, we will not change our course. It is impossible for us to retract. They [the United States and the coalition] were accusing us of supporting [IS]. Now they support terrorist groups including [IS], YPG [People's Protection Units] and PYD [Democratic Union Party]. It's very clear. We have confirmed evidence, with pictures, photos and videos.”

When asked about Erdogan’s accusations in a Dec. 27 press briefing, US State Department spokesman Mark Toner said, “It’s ludicrous, to be honest. No basis for truth, as you can all imagine.”

Toner responded, “We have supported their efforts along the border to clear it of [IS]. We’re in dialogue with them about possible next steps we can take in terms of al-Bab … and we certainly don’t want to see them enter into al-Bab without sufficient support.”

Another journalist asked, “Doesn’t that relate to Turkey’s attacks on the US — the US ally, the YPG, as in Manbij, and at that point there were all sorts of tensions developed between the United States and Turkey, and the US military let it be known that Turkey had gone past what was authorized in al-Bab? But the core of it was Turkish attacks on the US ally, the YPG, fighting in northern Syria and around Manbij and other areas. Wasn’t that the core of the problem?” Another journalist followed up and asked, “In the past, very recent past, you defined these Turkey moves around al-Bab as uncoordinated and not constructive. Do you still see the al-Bab offense as uncoordinated and not constructive?”

Toner tried to evade the questions and stressed the importance of Turkey as an ally against IS and alleged that American officials are in constant contact with their Turkish counterparts.

However, nothing can conceal that Turkey’s newfound alliance on the Syrian battleground is with Russia, and Ankara is involved with the trilateral (Moscow, Tehran and Ankara) initiative to resolve the Syria question.

Turkey cooperated with Russia for Aleppo and signed the Moscow Declaration, which acknowledged the legitimacy and the rights of sovereignty of the Bashar al-Assad regime. This was an admittance of the defeat of Turkey’s 5-year-old Syria policy that prioritized the removal of Assad. It was also a 180-degree about-face.

With an apparent policy failure impossible to cover up, Turkey sought a face-saving success story for its Syria policy: the fixation to move into al-Bab and to cleanse it of IS.

After the fall of Aleppo to the regime (with Ankara’s assistance), taking al-Bab from IS serves as a pretext for preventing the establishment of the Kurdish corridor adjacent to Turkey’s border with Syria.

Turkey’s nationalist decision-makers, in the wake of the fall of Aleppo and the assassination of Russian Ambassador Andrei Karlov in Ankara, seemingly lost their way in their Syria policy. Without much thought, preposterous statements on al-Bab followed one after another.

Deputy Prime Minister Nurettin Canikli, speaking in his hometown of Giresun, a town on Turkey’s Black Sea coast, said, “The defense line for Giresun should be set at al-Bab. The security of Ankara is synonymous with the security of al-Bab. If those areas cannot be controlled, one cannot defend Ankara, and also cannot defend Giresun.”

From al-Bab, in the vicinity of Aleppo, one needs to cross the entire landmass of Asia Minor to reach the Black Sea coast. For the first time ever, a strategic calculation was established between al-Bab and Giresun.

A similar assessment came from Devlet Bahceli, the chairman of the Nationalist Action Party and Erdogan’s foremost political ally. He said, “If we return empty-handed from the al-Bab operation, we will put Diyarbakir into risk, we will jeopardize the security of Ankara.”

Al-Bab, which until recently was an unheard-of northern Syrian town, has become the source of never-heard strategic assessments. The underlying reason for the focus on al-Bab is more about the Kurdish PYD and YPG rather than IS, which still holds the town.

In the wake of Russia’s political-military supremacy from cleansing eastern Aleppo of Turkish-supported rebel elements and Ankara’s drifting toward Moscow for diplomatic efforts to resolve the Syria question in addition to Erdogan’s growing resentment of American support to the YPG around Raqqa, Turkey’s Syria policy transformed to an unwarranted, irrational obsession for al-Bab.

The fears that Turkey, with no exit strategy, can be dragged into a Syrian quagmire are being verified.

Al-Bab, which was once no more than one of the gates to Aleppo, has thus become the gate to Turkey’s Syria blunder.