Turkish government blames protests in Iran on the West 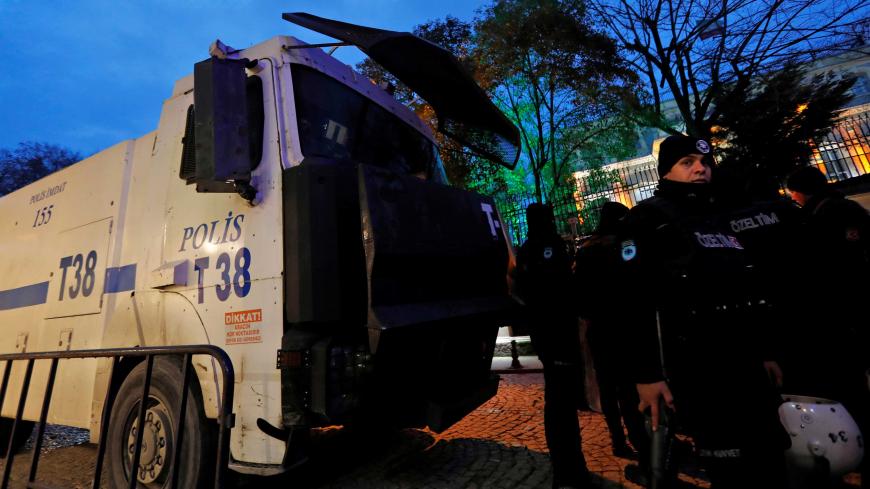 The mass anti-government demonstrations in Iran that flared in the last days of 2017 are being watched curiously in neighboring Turkey, as they are elsewhere in the world. As usual, many Turks chose to interpret the events based less on facts and more on their own ideological blueprints. And as usual, for the government and its supporters, this ideological blueprint involves something nefarious: an American-Zionist conspiracy to destabilize Iran.

This point of view was implied by Turkish Foreign Minister Mevlut Cavusoglu in a statement to the press on Jan. 2. “It is said that other forces are behind the events,” the minister said. He added, “One is [Israeli Prime Minister Benjamin] Netanyahu, the other one is [US President Donald] Trump.” Meanwhile, the pro-government media — which now constitute the majority of Turkish media — had already mapped out the plot: The Iranian protesters were merely the tools of outside powers that were trying to bring a defiant Muslim nation to its knees.

Among the dozens of columns that conveyed this point of view, one was by Ibrahim Karagul, the editor-in-chief of daily Yeni Safak. Accordingly, Iran was being “stirred up” by America and Israel. Moreover, if these two forces succeed in taking over Iran, the “next step” would be none other than Turkey itself. Talking heads on the pro-government news channel A Haber repeated the same line. These protests were taking place because “a new Middle East map" was being designed by the West. There seemed to be a "CIA-Mossad finger" behind the unrest. And if Iran did not stay robust, “the Syrian scenario” could well be repeated.

On Jan. 3, the daily Star, one of the staunchest pro-government newspapers, came out with a huge story that added more substance to the conspiracy theory. Titled “Trump’s puppets in Iran,” the story listed four insurgent groups that fight the Iranian regime: the Mujahedeen-e-Khalq, the Arab Struggle Movement for the Liberation of Ahwaz, the Salafist-jihadi Ansar al-Furqan and the Kurdistan Free Life Party. While these “American puppets,” along with at least 400 spies, were igniting “fitna,” or sedition, Star also told us, “the Iranian people” were supporting their Islamic regime in solidarity with the Islamic Revolutionary Guard Corps.

Turkey’s pro-government commentators seemed so certain about their interpretation of events in Iran that one of them criticized Iranian President Hassan Rouhani for being too naive to see the conspiracy. Accordingly, Rouhani had first made the mistake to see the protests “as an opportunity” for democratic reform. Only later did Rouhani come to his senses and vow to “teach a lesson to these marginal looters.”

Interestingly, Turkish President Recep Tayyip Erdogan himself proved more moderate than such hawkish Erdoganists. In a most reasonable phone call to Rouhani on Jan. 3, Erdogan expressed Turkey’s commitment to Iran’s stability, adding his support for Rouhani’s leniency to “peaceful demonstrations.” Two days later, Erdogan told Turkish journalists that “Rouhani's statement regarding the need to listen to grievances of protesters has calmed the tension.”

Yet all the pro-Erdogan propaganda against the Iranian protests is really remarkable, and it highlights two important points.

The first point, which relates to foreign policy, is that the cold war between Turkey and Iran that began some six years ago because of the Syrian civil war is now passe. For years, the two countries had supported opposite sides during the Syrian conflict, and Iran’s pro-Assad stance really angered Turkey’s ruling Sunni conservatives. It even led to some anti-Shiite biases, as I wrote in Al-Monitor about a year ago.

In the past year, however, Turkey clearly gave up on its regime change dreams in Syria, silently accepted to live with the Assad regime, and also got into a diplomatic process with Iran and Russia for a settlement in Syria. Meanwhile, Turkey’s relations with the West, in particular the United States, turned bitter. As a result, Turkey’s ruling elite began to realize that they share a lot in common with their counterparts in Moscow and Tehran.

One can see a silver lining in this Turkish thrust toward the East: that Turkey does not share the bitter sectarian divide in the region. The rapprochement with Iran, in other words, may be seen as an antidote to the Sunni-Shiite confrontation. On the other hand, however, the same rapprochement, especially on the basis of an anti-Western worldview, is a concern for those who value Turkey’s ties with the West.

The second point highlighted by the Turkish view on Iran’s protests is domestic: By interpreting the anti-government demonstrations in Iran as a Western conspiracy against the “Iranian people,” the Turkish semi-official propaganda is further establishing a narrative that it has been using at home: that there is a great Western conspiracy against Turkey, and the outspoken opposition forces against Erdogan are “traitors” who serve this global scheme. This gives an idea on how any possible anti-government protests in Turkey in the future will be interpreted and handled.

Of course not everyone in Turkey agrees with this deeply conspiratorial view of the world. Opposition newspapers such as daily Cumhuriyet published articles that interpreted the protests as a result of real economic and political grievances in Iran. Mainstream newspapers such as Hurriyet or HaberTurk also had room for analyses based on Iran’s domestic troubles.

Even among religious conservatives who are broadly supportive of the government, there were some nuanced views. One of them came out in the typically conspiracy-obsessed daily Yeni Safak in the exceptional column of Taha Kilinc. The writer argued that “there does not have to be a ‘conspiracy’ for masses to go out in the streets,” given Iran's ambitious foreign policy that has burdened its population and a regime that suppresses freedom and justifies corruption using religion.

An even more significant article came out in daily Karar, a new newspaper where those who long for the good old reformist days of the ruling party seem to have gathered. One of its columnists, Mehmet Ocaktan, who is also a former member of the parliament from the ruling Justice and Development Party, first told how Iran moved away from the promised ideals of the Islamic Republic and turned oppressive and corrupt. He noted that public anger against such regimes, which act in the name of Islam, would naturally turn against Islam itself. This was evident in “the anti-Islamic slogans in the protests,” Ocaktan argued, adding that it was a warning sign for all those who justified “despotic rule” with references to religion.

That is indeed the main lesson that Turkey’s current ruling class should take from what is happening in Iran. Their similarity with their Persian neighbor lies not in the giant Anglo-Zionist conspiracies the two nations are supposedly battling with; rather, it lies in the authoritarian “revolutionary” path that Iran has pursued and that Turkey also now seems too willing to try.