What is driving Ankara’s love for Nicolas Maduro?

Coup attempts in any country — democratic or not — continue to act as emotional tripwires for Erdogan and his supporters, especially if these attempts are supported by the West. 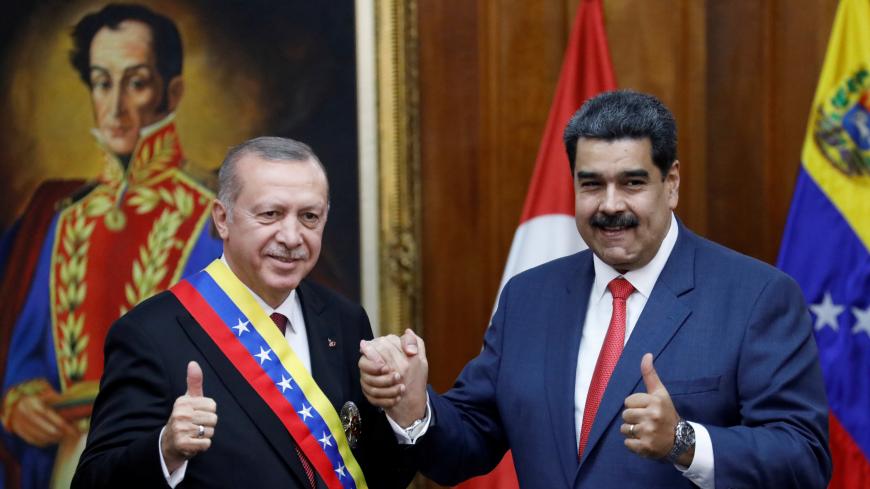 Developments in Venezuela are reverberating in Turkey, especially after President Recep Tayyip Erdogan threw his weight behind the country’s embattled President Nicolas Maduro.

Erdogan feels honor bound to do so, of course. Maduro was among the first international leaders to contact him even though the two hadn’t met before and offer support against the failed coup attempt in Turkey in July 2016.

Turkish sympathy for Maduro also transcends political divisions. He is as much of a folk hero for Turkish Islamists and nationalists today as he is for the far left, where many see him as a latter-day Fidel Castro or Che Guevara.

Anti-Americanism — traditionally high among Turks — cuts across Turkey’s deep ideological divides and remains a key aspect of the political narrative of most political parties today.

The irony is that — under normal circumstances — Islamists and nationalists loathe the brand of socialism represented by Maduro. It is his stand against what is perceived to be “American imperialism” that has united the left and the right in this case.

The support among Turks for Venezuela’s controversial leader, therefore, has little to do with his politics, which many in Turkey also accept has dragged oil-rich Venezuela to the brink of economic disaster.

It is based, instead, on what is believed to be Maduro’s heroic, David-like stand against the US Goliath.

This was also apparent in the words of encouragement Erdogan extended to Maduro over the phone after Washington went public with its intention to see him toppled and replaced by the opposition leader Juan Guaido.

Following the conversation between the two presidents, Erdogan’s chief foreign policy adviser, Ibrahim Kalin, tweeted on Jan. 23 that Erdogan had referred to Maduro as “my brother” and told him to “stand firm.”

Supporting the #WeAreMADURO hashtag, which has been trending around the world, Kalin added that “Turkey, under the leadership of our President Erdogan, will retain its principled stand against all coup attempts.”

Erdogan has also been trying to turn the tables on those who are accusing Maduro of being authoritarian.

He told reporters during a press conference in Ankara with Maltese President Marie-Louise Coleiro Preca on Jan. 25 that refusing to accept that Maduro was elected amounts to supporting “totalitarianism.”

“If Maduro stands erect and continues along the path of his beliefs, I believe that the Venezuelan people will stand behind the leader they support and produced from the ballot box,” Erdogan said.

There is, however, more to Ankara’s support for Maduro than mere “principles.”

The fear in government circles and among the religious and nationalist supporters of Erdogan is clearly that Washington — with support from other Western democracies — could do to Turkey in the future what they are trying to do to Venezuela today.

Those who believe this are also angry with Turkish commentators who stress the mistake of standing up for Maduro and his authoritarian regime.

They are particularly furious with those who stress that the international opposition to Maduro comes mostly from the democratic world, while authoritarian countries like Russia and China are the only ones joining Turkey in supporting him.

Yasar Hacisalihoglu, assistant professor at Istanbul New Century University, accused Turkish analysts who argue along these lines of “disregarding the democratic will of the Venezuelan people.”

He was referring to Maduro’s return to power in May, with 68% of the vote in presidential elections considered by international observers to be flawed. Hacisalihoglu argued in his column in the pro-government Aksam newspaper that those who criticized Maduro “were hoping for the US to intervene against Erdogan, the way it did against Maduro.”

Pointing to crucial local elections in Turkey planned for March, Hacisalihoglu claimed that Maduro’s opponents in Turkey were “using developments in Venezuela to try in advance and make the results of that balloting debatable.”

Burhanettin Duran, the general coordinator for the Ankara-based Foundation for Political, Economic and Social Research, argued that criticizing Turkey’s support for Maduro by providing a list of the Venezuelan leader’s mistakes was “meaningless.”

“Trump and his allies do not call for reconciliation or reform. They only encourage coup plotters and threaten to start a civil war,” Duran asserted in his column in the pro-government daily Sabah.

Glaring facts like government mismanagement, corruption and repression in Venezuela, as well as the desperate flight of over 3 million economic refugees from the country, are considered to be irrelevant by those who support such views.

Erdogan and his supporters continue to believe that Washington was the ultimate dark hand behind that coup attempt in Turkey in 2016. This was proved in their eyes by the belated and relatively mute US criticism of the anti-democratic coup attempt.

The fact that Fethullah Gulen — the self-exiled Islamic preacher who Ankara says masterminded the failed coup — lives in self-exile in Pennsylvania under US protection has merely reinforced this belief.

Coups aimed at toppling the government of the day in any country, whether they are authoritarian or democratic, continue to act, therefore, as emotional tripwires for Erdogan and his supporters, especially if these are seen to have the support of the West.

The same touchiness applies, for example, to mass demonstrations against the government around the world, like those in France recently. The overriding concern in such cases is that these demonstrations will incite copycat protests in Turkey.

Erdogan issued a dire warning when the Yellow Vest protests were at their peak in Paris, saying any attempt to emulate these demonstrations in Turkey would be dealt with mercilessly.

Erdogan’s response to the demonstrations in France reflects his deep fear of a repeat of the Gezi Park protests against his government in 2013. Erdogan and his supporters also accused the United States — with support from the Jewish lobby in America, European countries and Israel — of being the real mastermind behind the Gezi protests.

A repeat of such social upheavals in Turkey, especially at a time of increasing economic hardship for most Turks, remains one of the government’s greatest concerns in the lead-up to the elections in March.

Nevertheless, not everyone who supports Erdogan and his government believes that Maduro deserves the unconditional support he is getting from Turkey.

Kemal Ozturk, who writes for the pro-government Yeni Safak, argued that being anti-American should not be a reason to support “problematic regimes.”

“There is a very serious economic problem in Venezuela. People are wretched. … No one can claim that Venezuela’s report card on freedoms, human rights [and] justice is good,” Ozturk wrote.

He asked if it would not have been wiser for Turkey to criticize the United States loudly in this case while refraining from interfering in Venezuela’s domestic affairs and keeping a healthy distance from that country.

“Our approach to a leader who supported us on the night of July 15 [2016] may be emotional, but we have to adjust the balance between principles and emotions properly,” he argued.

Mehmet Ocaktan, a former deputy from Erdogan’s Justice and Development Party, was more direct in his criticism of the unquestioning support Maduro is getting from Ankara.

Pointing out that coups are bad regardless of where they take place in the world, Ocaktan argued that this should not blind us to what Maduro represents.

“The polished socialist Maduro is a genuine dictator and coup plotter,” Ocaktan, who today is critical of the Erdogan government’s policies, wrote in his column in the daily Karar.

He wrote that Maduro, despite being elected, is no less an oppressor than Syrian President Bashar al-Assad.

Ocaktan said those “who believe the lie that Maduro is a Democrat and hastily claim that Venezuela is suffering the greatest two-faced coup attempt of our times in front of the democratic world’s eyes” should face these facts and "calm down."