In the ongoing crisis in Venezuela, Turkey's left is finding itself aligned with President Recep Tayyip Erdogan’s foreign policy. 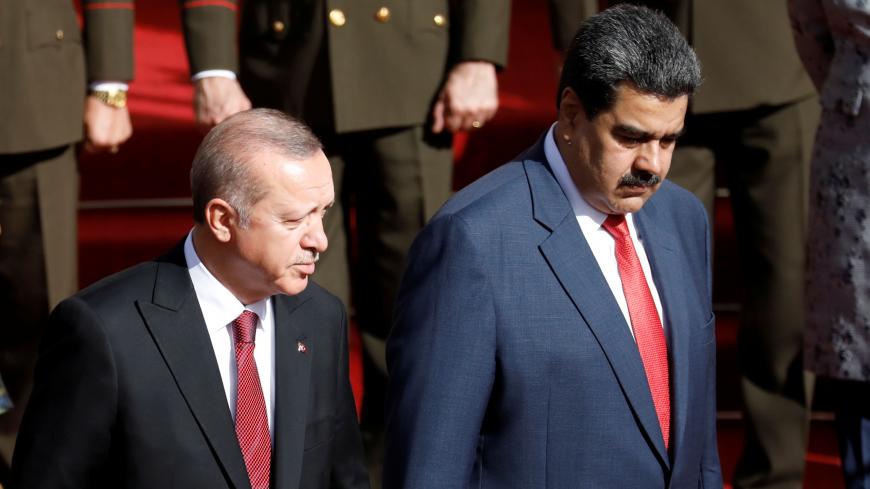 Alongside its ramifications for international politics, the Venezuela crisis served as an interesting indicator of how Turkey’s left could be a useful auxiliary to Turkish President Recep Tayyip Erdogan’s foreign policy. From the day the last crisis erupted in the Latin American country where hundreds of thousands of people filled the streets of Caracas in protest to the autocratic regime of Nicolas Maduro, with the President Donald Trump’s recognition of Juan Guaido as the legitimate interim president of Venezuela, the Turkish left displayed a fierce solidarity with the Maduro regime.

Maduro’s best friends are Russia, China, Cuba and Turkey. Erdogan, in December 2018, visited Caracas, where he was received with great fanfare. The Venezuelan leader visited Turkey several times and socialized with all symbols of public life ranging from television talk show hosts, actors of soap operas, to steakhouses that celebrities frequent in Turkey.

The plight of the Venezuelan people during the last couple of years saw the largest movement of refugees in the recent history of Latin America. The complete collapse of Venezuelan socialism had not been a concern of ideological and theoretical discussion for the Turkish left. But what the catastrophe of Venezuela could not do, the latest crisis that pitted Maduro against Trump, the European Union and the majority of Latin American countries has.

Anti-American and pro-Maduro sentiments began to circulate in the social media. Hurriyet reporter Ismail Saymaz, a self-styled leftist, was blunt, defiant and sarcastic on Twitter Jan. 23, writing, “Yes, I am anti-American dude! That's how I am; generally, whatever America stands for, I am against it. Do you have anything to say?”

He conceded Maduro committed a lot of mistakes but said that compared to Trump, who devastated the world, including Iraq, Syria and his own America, he is as pure as the recently baptized.

He inquired whether “Venezuela is poorer than Liberia, which the United States founded, or more authoritarian than Haiti that the US sponsored.” He responded with a blunt no and added that it's Venezuelan oil that the United States is after. “What [Iran's] Mossadegh was for America in the past is the Chavistas in Venezuela today,” he wrote. He also alleged that the unrest is not an uprising against poor governance and poverty in Venezuela, but a stand for Latin American unity and independence from the United States.

Such arguments of anti-Americanism and the American aim to monopolize Venezuelan oil wealth were recurring themes all over the leftist media outlets.

Mainstream center-left mouthpiece Cumhuriyet columnist Mehmet Ali Guller, who appeared on television talk shows on the Venezuelan crisis, alleged, “The issue is not Maduro, but the imperialist monopolies that devour the Venezuelan oil.” He argued, “During the process of the United States attempting a coup, targeting Maduro by calling him a dictator is an injustice to Venezuela,” and “It means that the United States has not derived the necessary lessons of demonizing Saddam, [Moammar al-] Gadhafi and [Bashar al-] Assad.” The Cumhuriyet columnist blames America for weakening the Venezuelan economy, which has “now started the operation to topple Maduro.” “Therefore, its is essential to stand up against the onslaught of American imperialism.”

The mouthpiece of the pseudo-Marxist left in Turkey, the daily Birgun, alleged, “Those who were unable to oust [Hugo] Chavez are now attacking Maduro.” The secretary-general of Turkey’s fringe Communist Party asserted in an interview, “Calling Maduro a dictator is in fact supporting the imperialist coup attempt in Venezuela.”

There is actually nothing unique in Turkish left’s stand compared to their ideological kin in the international arena. The Western left's attitude is not much different from Turkey’s regarding the crisis. Therefore, the willingness to stand by a brutal dictator that belies a deeper sickness on the contemporary left is a general phenomenon of the ideological poverty of the left in the aftermath of the Cold war and the demise of Soviet Union.

As Foreign Policy's James Bloodworth put it, “Under the guise of anti-imperialism, those on the far left have made themselves useful idiots for actual imperialists — as long as they’re not American. They have used the specter of Western intervention to ignore or downplay real interventions on the part of other powerful imperial nations. This was true in Syria with Russian and Iranian interference, and it is true in Venezuela, where Russia has supplied Venezuela with billions of dollars' worth of arms and flown in personal bodyguards for Maduro.”

Besides the crude anti-Americanism or anti-imperialism of the Turkish left shared by its like all over the world, the conflict in Venezuela has an aspect peculiar for Turkey: Turkey’s strongman Erdogan is an intimate buddy of Maduro. At a press conference with the visiting prime minister of Malta, Erdogan expressed shock at Trump’s statement on Venezuela, and was quick to rub shoulders with his Venezuelan counterpart.

In a passionate show of solidarity with Maduro, the Turkish left unambiguously presented itself to Erdogan as a moral auxiliary force in his foreign policy. If the compass, as the Venezuela case illustrated, is anti-Americanism above anything else, the Turkish left will be useful for Erdogan’s anti-Kurdish drive in Syria as long as it contradicts Washington's stance.

Turkey is nearing local elections to be held at the end of March. Big cities like Istanbul and the capital Ankara are contested, as well as the municipalities in the southeast, of which the pro-Kurdish Peoples’ Democratic Party (HDP) had won 101 in 2014. Over 90 of them are now under the control of trustees appointed by Erdogan following the failed coup in 2016. Scores of elected mayors affiliated with the HDP are in jail. Last week, the European Parliament of the Council of Europe in Strasbourg adopted a resolution regarding the repression over political parties in Turkey. The main opposition Republican People's Party (CHP), a member of Socialist International, voted in protest along with the ruling AKP and its ally Nationalist Movement Party representatives.

Dishearteningly for pro-democracy dissenters in Turkey, well-known CHP personalities voted against a resolution against political repression in Turkey.

With such moral bankruptcy, Turkey’s left cannot provide checks and balances to an increasingly arbitrary Turkish regime, nor it can present itself as a viable political alternative. Its poverty is simultaneously an added value to Erdogan’s political wealth.

Back to the Venezuela issue, Bloodworth's question for the Turkish left is valid: It's one thing for Western anti-imperialists to demand that the United States stay out of Venezuela's internal affairs. But how can you ask Venezuelan dissidents and elected bodies to do so?

The question is too complicated for Turkish leftists to answer. First of all, they have no knowledge of the characters involved and the developments in Venezuela in the last few years, as they do not know what shale oil is and what it means for the American market.

But they are confident that the Venezuela issue is all about oil and they do not care for political repression, whether the regime is autocratic or dictatorial or anything else. The humanitarian catastrophe being witnessed is not a priority, either. Their metric is simple: Who is against the United States of America?

All these are indicators that the left will have no chance in Turkey’s future. Erdogan is aware of this and understandably pleased.