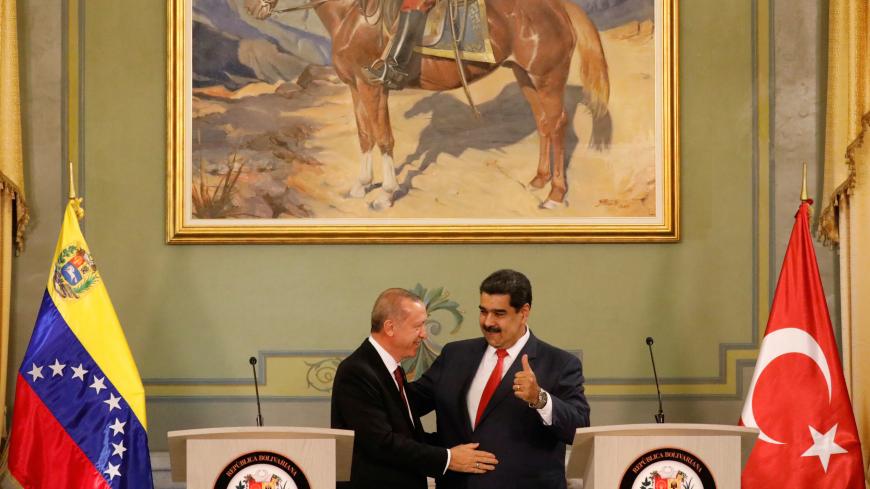 Turkey’s President Recep Tayyip Erdogan kept up support for Venezuela’s tottering strongman Nicolas Maduro today, saying he was a democratically elected leader and needed to be respected as such.

Speaking at a joint news conference in Ankara with visiting Maltese President Marie-Louise Coleira Preca, Erdogan asserted, "If you do not respect election results, then this is not democracy.” Erdogan urged Maduro to keep resisting opposition leader Juan Guaido’s efforts to topple him. “Should Maduro stand tall and continue on the path he believes in, I am certain that the people of Venezuela will stand behind him,” Erdogan said.

Erdogan’s comments followed a phone call to the Venezuelan leader in which he pledged support and referred to Maduro as “my brother.”

The Venezuelan president, who is blamed for the economic meltdown that has impoverished millions in the oil-rich Latin American country, is facing the biggest threat to his rule since being re-elected for a second year term last May in polls that were marred by an opposition boycott and widespread allegations of fraud. The United States, Canada, Latin American heavyweight Brazil, Colombia and Peru are among the countries that recognized Guaido as Venezuela’s legitimate president.

Turkey is in the opposite camp alongside Russia and China, highlighting the NATO member’s marked drift toward authoritarianism and like-minded regimes.

In Maduro’s case, however, they are bound by more than a shared tendency to stifle dissent. Erdogan faced down a bloody coup attempt in 2016 that he blames on Fethullah Gulen, the Pennsylvania-based cleric who used to be his top ally until they fell out over the spoils of power. And like Maduro, he sees the United States’ hand in the failed putsch.

The pro-government Yeni Safak was quick to finger the CIA, claiming that it was behind a social media campaign to rally anti-Maduro protesters. “The CIA intervened and millions [of posts] were shared,” the paper charged.

Erdogan, an Islamist, and Maduro, a socialist, seem unlikely bedfellows. Yet Turkey’s Islamists joined hands with the country’s leftists in catapulting tweets hashtagged “WeAreMaduro” to the top trending postings.

Evren Celik Wiltse, an associate professor of political science at South Dakota State University who studies Turkish and Latin American politics, took to Twitter to comment on the apparent contradiction. “I see Turkish Islamists becoming anti-hegemonic warriors for Maduro. This sudden leftist turn, yet they can’t even stomach gender equality.”

United by an unremitting suspicion of the West, Turkey and Venezuela have been growing closer in recent years. Nicholas Danforth, an expert on Turkey and a fellow at the Bipartisan Policy Center, told Al-Monitor, “Erdogan sees himself in Maduro — a democratically elected leader targeted by US economic warfare now facing a coup attempt because he stood up to the West.” Danforth continued, “In this case, Erdogan’s stand resonates with the hostility that many people across Turkey’s political spectrum feel towards American interventions — real and imagined — across the world.” This was on full display when Egypt's first democratically elected President Mohammed Morsi, a fellow Islamist, was overthrown by the general-turned-statesman Abdel Fattah al-Sisi. Turkey's relations with Egypt have remained frosty ever since.

Erdogan reciprocated in early December. Turkey has become a major importer and refiner of Venezuelan gold, prompting worries that some of it is winding up in Iran’s coffers. Venezuela exported $900 million worth of gold to Turkey in the first three quarters of 2018, according to an in-depth report by Politico.

Turkey’s aid agency TIKA provides humanitarian supplies flown in by Turkish Airlines, one of the few Western carriers that continue to operate flights to Caracas.

According to Venezuelan media reports, 69% of food in ration boxes distributed to the poor comes from Turkey. Wiltse told Politico, “For all the humanitarian aid, [Turkey] is also extending a lifeline to a regime that should have or could have collapsed if it wasn’t for that lifeline.”

Turkey’s embrace of the likes of Maduro and Putin, however, also exposes the difficulties facing Erdogan’s foreign policy going forward. “Can Turkey continue to align itself with those who seek to challenge or resist the West while staying on functional terms with Turkey’s Western partners?” Danforth asked. “Can Erdogan resist US hegemony while still benefitting from it?” His passionate defense of the embattled Venezuelan leader suggests he may be feeling the heat.