Despite US sanctions against the South American country, Turkish President Recep Tayyip Erdogan and Venezuelan President Nicolas Maduro are expanding their gold business. 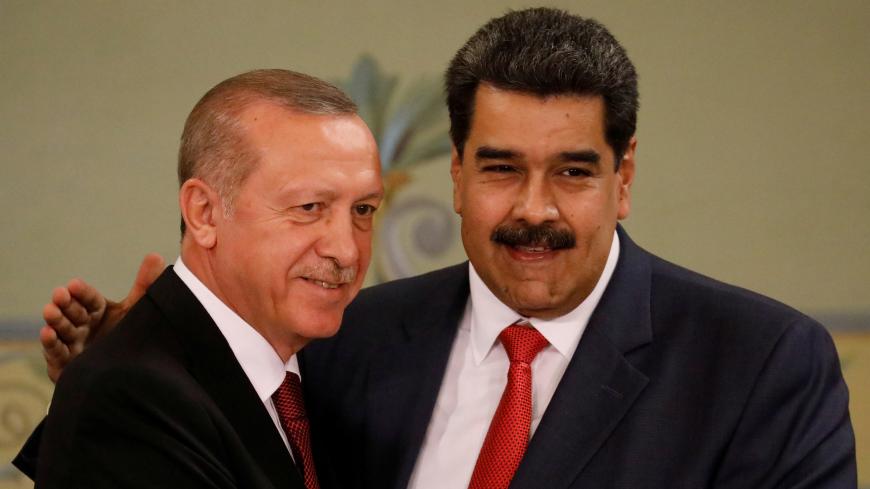 In less than one year, Turkish President Recep Tayyip Erdogan and Venezuelan President Nicolas Maduro have become two chummy leaders who embrace and watch out for each other in tough times. In reality their political mindsets, worldviews and lifestyles are totally contradictory. Maduro’s predecessor, Hugo Chavez, who lifted Maduro from the bottom to the zenith, had become friends with Iranian President Mahmoud Ahmadinejad while challenging US hegemony.

What makes Erdogan and Maduro close buddies is their joint perception of being targeted by the US government. When Maduro was coming to Ankara to congratulate Erdogan for winning the June 24 elections, he saluted Erdogan as “the global leader of the new multipolar world.”

Maduro has other reasons to feel close to Erdogan, primarily their joint economic hardships.

Venezuela, the fifth-biggest oil producer of the world and once the engine of leftist Latin America, became a bankrupt country where many of its people go hungry. The IMF says Venezuela’s inflation is 1.37 million percent. His opponents attribute to this disastrous situation to a populist administration that doesn’t produce solutions. According to Maduro, however, the real culprit is the US-origin embargo, blackmail, coup conspiracies, black marketers and speculators who have joined the economic war.

Turkey still has the 17th-biggest economy in the world but is going through a dark period of 25% inflation, sinking Turkey's currency and collapsing companies. Both leaders have similar concepts of democracy, which is, “I came from the election box, I will go with it. I don’t care about the yelling from the streets.”

Despite these abnormal, politically contradictory conditions, a new synchronism has emerged: “Gold brotherhood.”

For about a year, Maduro, wary of EU sanctions, has been sending his gold to Turkey for processing. But when President Donald Trump signed an executive order Nov. 1 imposing sanctions on Venezuela, many wondered what Ankara’s reaction would be. “The sanctions are likely to have a particular effect on trade with Turkey, with tons of gold sent there annually for refinement and processing,” Bloomberg news service said.

Erdogan went to Venezuela after the G-20 summit in Argentina to formalize the Turkish-Venezuelan partnership at the Venezuela-Turkey Business Forum. Two countries signed bilateral cooperation agreements in defense, mining and oil production. Erdogan, who was honored with El Libertador Order of Simon Bolivar, did not hesitate to challenge the US discomfort with the warm relations between Turkey and Venezuela. Erdogan said: “Do we need someone else’s permissionto be friends with others and with whom we will have commercial relations? We ask for permission of only our own people.”

Maduro said the two countries will not take steps back from their gold cooperation. He said, “We will increase gold production threefold and show that we have the second-largest gold reserve of the world.” Maduro also said Venezuela has opened all sectors to Turkish investors; these include oil refinement and production, gold production and refinement, diamonds, iron, aluminum and tourism.

Venezuela’s Minister of Mining Victor Cano explained why his country is ending gold for processing and for the production of gold coins to Turkey. “We used to arrange for certification in Switzerland. Not anymore. We are doing it now in allied countries. Just imagine sending your gold to Switzerland and they are seizing it because of sanctions,” he said.

Will cooperation in gold change much for two countries? A source in the sector spoke to Al-Monitor about what their gains may be: “Venezuela is the fourth major country in gold reserves. Turkey wants to refine annually $1.5 billion of gold. In Venezuela gold exploration is done by small companies. They can’t increase their production because foreign capital cannot come. It can sell its gold to third countries via Turkey. This could be profitable to both countries.”

Gold has been refined in Turkey since 1996, when the first large-scale facility was set up in Istanbul. Al-Monitor has learned that in 2017, when Ahlatci Gold Refinery of Corum began operating, the number of such large-scale facilities went up to three and annual capacity went up to 400 tons. But only 250-300 tons of the capacity is utilized. In other words there is still idle capacity to process gold that could come from Venezuela. Also, there is gold processing capacity of 250 plants and 2,500 workshops with annual capacity of 300 tons.

There are doubts how far this partnership can advance, especially at a time when US sanctions on the mining sector are being discussed; more cooperation in this field will raise questions about Turkish-American relations. It is not yet clear what awaits Turkey in Venezuela.

There is no doubt that the Ankara-Caracas partnership raised antennae in Washington. There is an increasing trend of foreign trade between the two countries, although the numbers are small. Maduro’s first visit in October 2017 had a definitive affect. While the foreign trade volume of the two countries was $803.5 million over the 2013-2017 period; this went up to $971.5 million in the first nine months of 2018. Turkey’s food-related exports are $61 million and mining imports are $903 million; 90% of the mining imports are gold. Bearing in mind that Turkey’s foreign trade is $390 billion, these are quite modest numbers.

The Turkish construction sector, which has been shrinking in the Middle East, has now entered Venezuela. Also, Maduro indicated that at the July 10 Venezuela-Turkey Business Forum in Istanbul that his country’s cryptocurrency, the petro, could play a role in the bilateral relationship.

“The guarantee of our cryptocurrency is … petrochemicals. This new currency will benefit Turkey and our economic ties will advance even more,” Maduro said. But so far there has been no progress with this proposal.

Turkey’s interest in Venezuela is likely to be a widely discussed issue in the coming days.