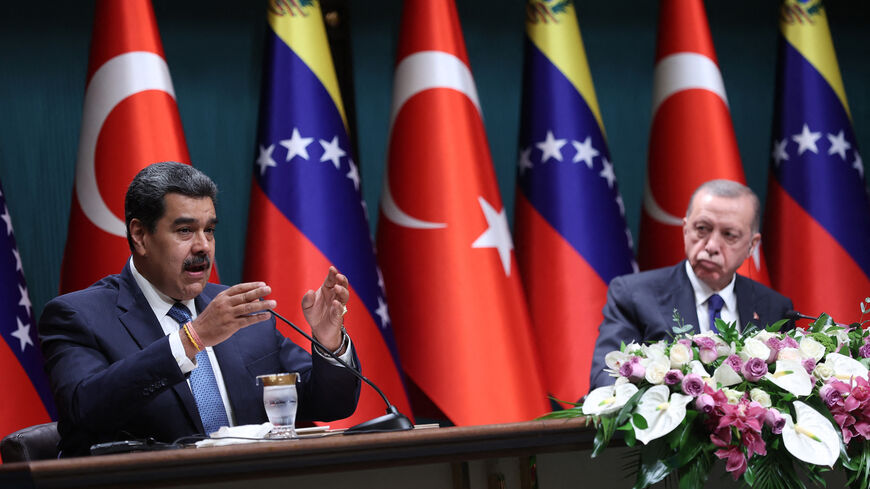 ISTANBUL — Two world figures under Western sanctions were guests at the same building in Ankara on Wednesday.

Russian Foreign Minister Sergey Lavrov and Venezuelan President Nicolas Maduro both arrived at Turkish leader Recep Tayyip Erdogan’s presidential palace within hours of each other but, according to Maduro, they did not meet.

Lavrov, who faces restrictions from several countries on his travel due to sanctions over Russia’s war against Ukraine, was in Ankara for a meeting with his Turkish counterpart Mevlut Cavusoglu.

No explanation was given as to why this meeting was held at Erdogan’s Bestepe complex rather than, as is usual, at the Foreign Ministry a short distance away.

Later in the afternoon, Maduro arrived at the palace for a meeting with Erdogan.

Accompanied by a cavalry escort, his Mercedes limousine was welcomed by the Turkish president, who accompanied him past an honor guard including men dressed as historical Turkic warriors.

Venezuela is subject to a US oil embargo imposed three years ago, adding to wider pre-existing sanctions imposed by a range of countries. With help from Russia and Iran, Maduro’s authoritarian regime has maintained oil sales, primarily to China.

Maduro was visiting Ankara as part of an impromptu Eurasian tour after he was snubbed by Washington, which decided not to invite him to the Summit of the Americas, a meeting of regional leaders being held in Los Angeles.

Lavrov, meanwhile, flew into the Turkish capital for a bilateral meeting with Cavusoglu that was dominated by talks about a proposed grain corridor to allow the export of Ukrainian farm produce amid a Russian blockade of its ports.

He was able to travel to Turkey, which has not imposed sanctions on Moscow over the invasion of Ukraine, because the two countries share a maritime border in the Black Sea.

Two days earlier Lavrov’s planned trip to Serbia was cancelled when NATO members Bulgaria, North Macedonia and Montenegro reportedly refused to allow his plane to fly through their airspace.

The presence of representatives of two of the top five most-sanctioned nations drew attention from Turkey watchers.

“It’s difficult to believe that Maduro and Lavrov didn’t meet up given the cozy relations between Russia and Venezuela and the fact that they were both in the same place on the same afternoon,” one Western diplomat told Al-Monitor on condition of anonymity.

That Turkey provided the venue for such a meeting, if it took place, should have also come as little surprise. Ankara’s close relations with President Vladimir Putin’s regime have troubled NATO allies in recent years, from its purchase of Russian S-400 missiles to objections that could prevent Finland and Sweden from joining the defense alliance.

Ties with Venezuela have also blossomed under Maduro’s rule, with trade between the two rising to nearly $850 million from around $150 million at the end of 2019.

Their growing ties were sealed when Maduro pledged support to Erdogan within hours of a coup attempt in 2016. Maduro faced down an uprising against him three years later, no doubt reinforcing the bond with his Turkish counterpart.

Turkey has since become a major destination for Venezuelan gold, a trade that has raised allegations about the involvement of criminal gangs and sanctions busting.

Erdogan was the first Turkish president to visit Venezuela in 2018 while Maduro has traveled to Turkey on several occasions.

During one such stopover, Maduro and his wife were criticized for dining in the expensive Salt Bae steak restaurant while many Venezuelans struggled with poverty.

As well as contemplating their growing links — Turkey and Venezuela signed three further agreements on banking, agriculture and tourism during Maduro’s visit — the countries’ leaders also share grievances over sanctions. Its acquisition of Russian missiles saw Turkey kicked off the US-led F-35 fighter program — after it had invested $1.4 billion, according to Erdogan — and a range of US sanctions imposed on its defense industry.

Further sanctions were added by European states following a Turkish incursion into northern Syria in 2019 and gas exploration in the eastern Mediterranean Sea the following year that brought it into confrontation with EU members Greece and Cyprus.

During his joint news conference with Maduro on Wednesday, Erdogan railed against the “one-sided” sanctions on Venezuela. “We will always stand with the friendly and brotherly people of Venezuela,” he said.

Imdat Oner, a former Turkish diplomat to Caracas and now a senior policy analyst at the Jack D. Gordon Institute for Public Policy at Florida International University, described Turkey-Venezuela ties as “an alliance of convenience, characterized by growing bilateral trade, mutual dislike of the United States and closer relations with Russia and the personal chemistry between Erdogan and Maduro.”