President Erdogan's vocal support for Venezuela's Nicolas Maduro is being echoed in the Turkish media, with TV channels broadcasting programs on past CIA coups. 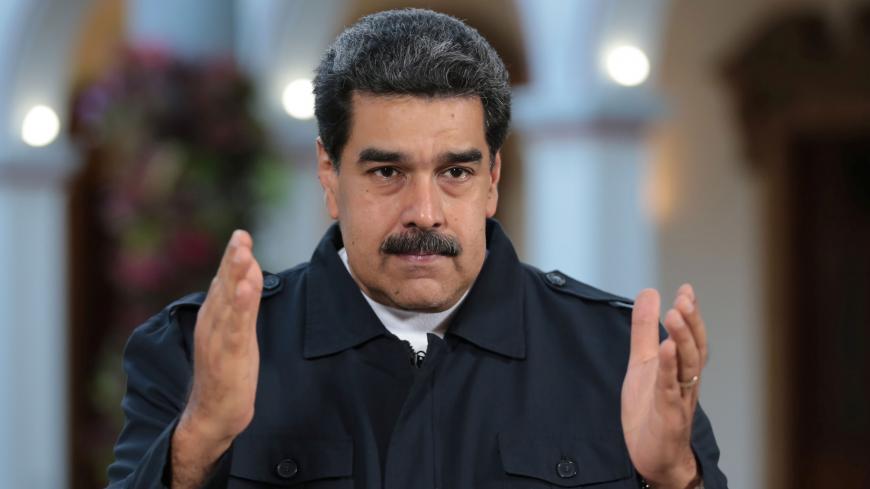 On Jan. 24, at a joint press conference with the Maltese president, President Recep Tayyip Erdogan uttered a sentence that has since made headlines. “I called President [Nicolas] Maduro on my way back from Russia and told him clearly not to give in to anti-democratic efforts, and stand tall.” Erdogan then told the press that he did not know Maduro until the coup attempt of July 15, 2016, when Maduro promptly called Erdogan to show solidarity. After that call, Maduro visited Turkey, Erdogan added. Then, looking into the eyes of the Maltese president, Erdogan complained that not a single EU leader — except for the UK — had called him after the coup to show support.

The year 2018 was one of friendship between the Turkish and Venezuelan leaders. In July, Maduro attended Erdogan’s inauguration ceremony. He also visited the set of a popular TV show, “Resurrection: Ertugrul." The show is praised in particular among the voter base of the Justice and Development Party (AKP), as it evokes feelings of both Islamic and nationalist pride. AKP media published images of Maduro during his visit wearing a Turkic warrior costume. Maduro has said he enjoys "Resurrection: Ertugrul" — a compliment that went deep into the hearts of the Turkish public. Maduro has also openly expressed his fondness for Erdogan — or, as he says his name, "Endrogan" — and called him “the leader of a new multipolar world.” In December, Erdogan visited Venezuela and received an extravagant welcome fit for a hero.

Erdogan’s outspoken support for Maduro was not surprising for anyone who follows Turkish news. On Jan. 23, Donald Trump announced via Twitter that he had “recognized the President of the Venezuelan National Assembly Juan Guaido, as the Interim President of Venezuela.” Since then, Turkey's pro-government TV channels and newspapers cannot stop talking about "standing tall with Maduro for democracy."

Erdogan was not too harsh on Trump, only stating that he was shocked to learn of Trump's stand. Erdogan, it seems, was not willing to upset Trump personally to protect his "brother" Maduro. That was probably a smart move, as Erdogan understands personal relations are crucial for the US president.

First, Erdogan and Maduro have good personal relations. They have used mutual visits to show to their populations that they are well respected internationally. Erdogan and his team also empathize with Maduro, as seen by presidential spokesman Ibrahim Kalin’s Twitter hashtag #WeAreMaduro.

Second, Erdogan prefers opaque financial deals that will not face public scrutiny. Multiple sources suggest that the Erdogan-Madura brotherhood has financial payoffs, although the extent and details are not clear. US sanctions have gradually come to cover Venezuela. Sources close to the presidential palace informed Al-Monitor that they expect Erdogan to follow the same path as he did with Iran: Erdogan will openly criticize the sanctions, but the country’s financial system will make the necessary legal adjustments.

That said, those motives do not explain the pro-government media's continuous and detailed focus on Venezuela. Turkish TV channels have carried hours of programming on conspiracy theories and CIA coup attempts around the world. What is behind this intense interest in explaining Maduro’s struggles to the Turkish public?

Talking to sources close to the presidential palace and in senior positions in the Ankara bureaucracy, we can understand why Maduro’s struggles present a golden opportunity for Erdogan’s domestic politics.

First, it is a starting point to linking all hardship to the July 15 coup attempt, while campaigning for the March 31 municipal elections. Although the local elections will not impact Erdogan’s executive presidency, they have turned into a vote of confidence for Erdogan. The official campaign is set to start Feb. 1, but Erdogan is already on the campaign trail. This is a system built on images of Erdogan appearing before the public and being applauded. Considering the increasing cost of life for the Turkish lower and middle classes, Erdogan’s rallies are falling short of their regular enthusiasm.

“The US-organized coup against Maduro,” as it is presented in Turkish press, provides a great opportunity for Erdogan to rally the crowds. This allows him to benefit more from the July 15 coup attempt, while also providing him with an out for economic struggles. His message, as echoed by the media, is: “Venezuela suffers because of the West, just like we do, but we have to stand together in solidarity and resist the imperial powers.” Partial facts mixed with mind-boggling conspiracy theories aim to confuse audiences, if not convince them that the West is to blame for their poverty.

The Venezuela situation also helps discredit Turkish opposition members for interacting with foreign representatives. Erdogan ally and ultra-nationalist party chairman, Devlet Bahceli, for example, has said, “What if Trump wakes up one morning and declares [Kemal] Kilicdaroglu, as the president? What do we do? Do we accept that?” Kilicdaroglu is the chairman of main opposition party, and it is expected that these messages will be repeated at Erdogan's rallies.

Second, Erdogan has reached the end of his promise of endless growth. Turkish efforts to topple Syrian President Bashar al-Assad have failed. The cost of the neo-Ottoman dream weighs on the Turkish public, and Erdogan is finding it difficult to generate hope or redirect people’s anger. Maduro’s hardship, at this point, is an unexpected gift.

This is why Akit TV commentator, Fatih Dagistanli, pointed to an Islamist paper headlined “Imperialist Siege” and said: “To stand by Maduro is, in a sense, to stand by Erdogan. They are different men, different countries, yes, but what has happened to them both, what their countries are going through resemble each other. If they manage to send Maduro off, know that they will be packing Erdogan out. This is the first step to packing Erdogan out.”

His colleague, Ali Ihsan Karahasanoglu, concurred, adding, “We can say the Sisi case [referring to Egyptian President Abdel Fattah al-Sisi overthrowing the Muslim Brotherhood leader Mohammed Morsi in July 2013] is the first step, and this is the second. The tactic is the same.”

When credible promises are no longer viable, fear-mongering is the only way to hold on to power. Here, standing with Maduro, the underdog, Erdogan again proves he is righteous in the eyes of his supporters.

Third, supporting Maduro means standing against the United States as the "gendarmerie of the world” and the CIA as the enemy of democratically elected governments. Anti-Americanism has sizable support in Turkey, extending beyond Erdogan’s base. That is why Turkish TV programming is focusing on the stories of deposed Iranian Prime Minister Mohammad Mossadegh and the coup against Venezuelan President Hugo Chavez in 2002. Bashing the United States is one of the few activities that can bring the Turkish public together.

A source close to the presidential palace summarized the situation: “Supporting Maduro, we stand with the underdog against the hegemony of the US dollar, which steals our people’s wealth. Also we classify political opposition criticism as a threat to our national solidarity, while compelling social opposition to unite under our position against Western imperialism. It is win-win-win for us.”

Yet the decision to support Maduro is another step pushing Turkey away from the global economic and political establishment. The Turkish opposition, whose powers are dwindling, will lose more ground. Erdogan’s rhetoric will focus more on the need to rally around the flag rather than face the struggles of the highly ineffective presidential system. In the name of supporting Maduro, the Erdogan administration puts Turkey one step closer to its exit from constitutional democracy.