When supporters of Turkish President Recep Tayyip Erdogan look at the situation in Venezuela, they see a leader to be defended like their own instead of a situation to be avoided. 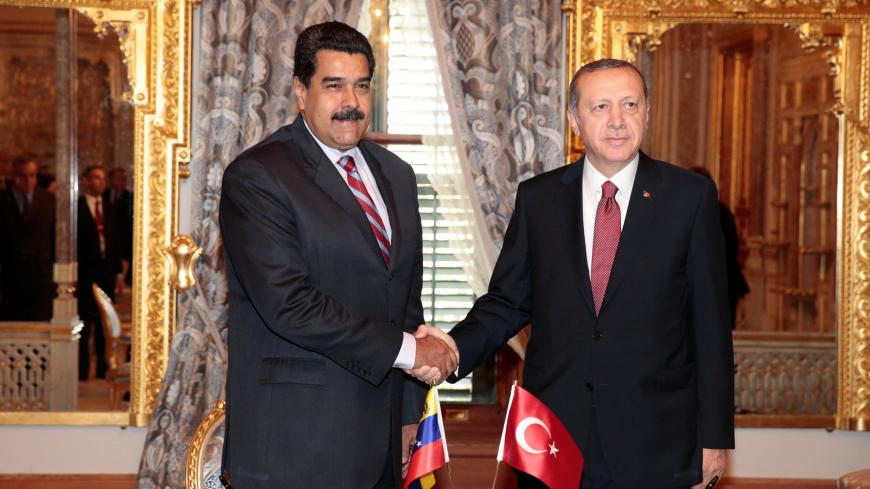 Venezuela, hit by economic devastation and political turmoil, is one of the most troubled countries today. Its situation has lately become so dire that 90% of its citizens are reported to have trouble affording food. Meanwhile, Venezuelan officials have “embezzled billions.” Venezuela currently ranks as the most corrupt country in Latin America. The ongoing catastrophe there has triggered mass unrest against President Nicolas Maduro, who has responded by grabbing more power and cracking down on the opposition with such measures as arresting opposition leaders. That is why Maduro is widely condemned around the world as a “dictator,” and Venezuela seems to be yet another failed experiment in socialism.

There are, however, admirers of Venezuela and its autocratic president, and they are not just left-wing comrades such as British Labor Party leader Jeremy Corbyn. To wit, Maduro enjoys unmistakable sympathy in Turkey from a political strain that can hardly be defined as “left” — Erdoganism, the ruling ideology and sentiment centered around the resolute leadership of President Recep Tayyip Erdogan.

This affection is evident in the Erdoganist media, where dozens of reporters and commentaries have lately been praising Maduro as a patriotic leader resisting plots by the CIA and other agents of “imperialism.” For example, an article in the daily Star headlined “Behind the Scenes of Events in Venezuela” argued that criticisms concerning the rule of law and human rights in Venezuela are merely propaganda in a “campaign by drug cartels and companies supported by the CIA.” Likening this propaganda to that against Turkey, the author added that Erdogan is much smarter than Maduro and therefore has better managed Turkey’s affairs.

A writer for the pro-Erdogan daily Milat also drew an analogy between Erdogan and Maduro, claiming that both leaders had been “targeted by CIA-orchestrated coup attempts.” It is now time to “protect democracy from the West,” the columnist said, and Maduro deserves praise “as the legitimate leader of Venezuela elected by the majority.” Aydinlik, a left-wing daily that has recently joined the pro-Erdogan camp, claimed to expose “the same CIA methods in Turkey and Venezuela.”

In Sabah, the flagship of the pro-Erdogan media, a columnist also took up the Erdogan-Madura analogy, but from a slightly different perspective — as an argument against the Turkish left. The left in Turkey recognizes the imperialist plot against Venezuela, the writer asserted, but it has failed to see that the exact same plot has been cooked up against Erdogan’s Turkey, and members of the left are unwitting participants in this plot. Thus, by opposing Erdogan with public protests, the writer claimed, the Turkish left has “chosen the will of the colonialists to the will of the nation.”

On social media, the Erdogan-Maduro axis is even clearer. “Erdogan said to Israel, ‘You are murderers.’ Maduro said the same to Israel.’ The rest is known,” wrote one Twitter user. Apparently he was referring to the common narrative that Erdogan only began to face criticism for supposed authoritarianism after he bashed Israel in 2009 (which, by the way, is incorrect, as reported in Al-Monitor). Another Turkish Twitter user expressed the same sentiments directly to @NicolasMaduro, writing, “Viva Turquia! Viva Venezuela! Viva Erdogan! Viva Maduro! Mr. Maduro, you are not alone.”

In the pro-Erdogan camp, only one writer found the Erdogan-Maduro analogies disturbing and “very unfair.” In the centrist HaberTurk, the liberal-leaning columnist Nagehan Alci reminded readers about the big differences between Maduro and Erdogan. Maduro and his predecessor, Hugo Chavez, relied on the army, whereas Erdogan never had the military on his side, Alci wrote. The elections in Venezuela are much less credible than Turkey's, she claimed, and Maduro is ultimately a “Marxist-Leninist.”

Alci's points are valid. It is especially clear that Erdogan is not a socialist. His success over the past 15 years has largely been based on capitalist growth, which was recently publicly emphasized in his inauguration of a Coca-Cola factory in the modest province of Isparta.

Erdogan and Maduro do, however, have similarities when it comes to their affection for populism, a political tool that can be used by politicians on the right and the left. From a populist perspective, society is divided between the “true people” and the enemies within, who are somehow threatening to the national ethos. Moreover, the true people are represented by a powerful leader, who will crush the enemies within and defy the dark forces behind them. Populism is, by nature, authoritarian and polarizing.

The problem with populist leaders is not their resisting “imperialism,” which can be real or perceived in any given situation. Rather, the problem is that they delegitimize their political opponents as agents of imperialism, and therefore themselves erode democracy from within. Democracy only begins when all the different components of a society are considered as equally legitimate.

Thus, when Turks look at the current tragedy of Venezuela, they would be better off seeing not a model with which to identify, but an experience to avoid. The Latin American nation shows how a populist zeal can bankrupt a whole nation by making “anti-imperialism” a blueprint for autocracy and a cover for corruption and nepotism. It also reminds that the way forward for any nation is inclusion, not division, and freedom, not oppression.