Fueled by conspiracies and fake news, Turkey’s ruling elite want to portray all hostile acts in the country as controlled by a Western “mastermind." 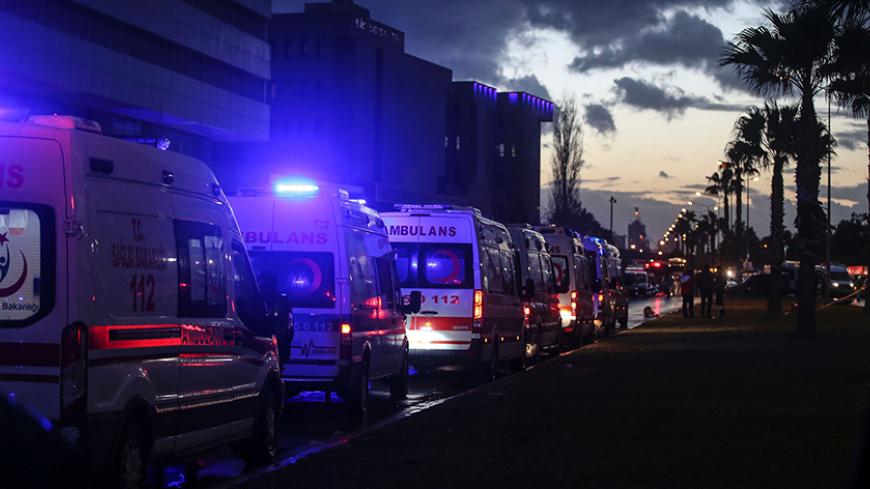 Ambulances attend the site of an explosion in front of the courthouse in Izmir, Turkey, Jan. 5, 2017. - EMRE TAZEGUL/AFP/Getty Images

On Dec. 5, the daily Sabah, the flagship of Turkey’s pro-government media, came out with an assertive headline: “It is very clear that Daesh [Islamic State], the PKK and FETO are acting all together.” Accordingly, these three very different nonstate actors — IS (radical jihadis), the Kurdistan Workers Party (PKK Kurdish separatists) and the Fethullah Gulen Terror Organization, or FETO (an Islamic cult with political ambitions) — were attacking Turkey at the same time in a well-coordinated campaign. Moreover, their coordinator was the nefarious “mastermind” — a conspiratorial power that President Recep Tayyip Erdogan invented in 2015 and has been defined by his supporters as the US government.

This Sabah “news story” was not unique; it is rather a political narrative that one can read in Turkey’s pro-government media literally every single day. It is a narrative based on a partial fact: Turkey, indeed, has been targeted by repeated terror attacks by IS and the PKK. It is also common wisdom in Turkey that the Gulenists were indeed the main element behind the failed coup attempt in July. However, the assertion that these groups are coordinated by a single major manipulator is not a fact — it is a conspiracy theory.

Erdogan seems to agree with this conspiracy theory, as he not only gives his blessing to the pro-government media but even publicly refers to their “news” — including unabashedly fake news. For example, in a recent public speech, Erdogan said, “An American general declares, ‘We founded [IS].’ It is not me who is saying that; it is him.” This was a clear reference to a recent fake news story on A Haber, the Sabah TV channel. A two-minute video of retired American Gen. Wesley Clark's statements on the discussions in the wake of the Iraq War of 2003 was subtitled by A Haber, but by a crucial add-on: “We needed a hammer, so we founded [IS],” the American general was made to say on A Haber, while the original sentence only read: “If all you have is a hammer, then every problem looks like a nail.”

Aren’t there any people in the pro-government media who oppose such fake news — of which there is plenty — and the conspiracy theories based on them? There are just a few. But they are on the margins and are condemned by hard-core pro-Erdoganists — on social media or aggressive websites — as “traitors” who are serving the United States by concealing its plots. Anti-Western conspiracy theories make up today’s official ideology, and those who doubt it attract a lot of wrath.

Yet for anyone who doubts the official ideology, the theory that all terror groups are united — regardless of what one thinks about America — is implausible. IS and the PKK are not in collaboration; rather, they are at war with each other. The PKK’s Syrian affiliate, the Democratic Union Party, has been actively fighting IS over the past two years, and IS is hitting back. In fact, the first three major terror attacks by IS inside Turkey — in Diyarbakir, Suruc and Ankara, all in 2015 — were directed at leftist Kurdish targets, which were considered pro-PKK. It is more correct to say that Turkey has been the stage of the IS-PKK conflict — along with their independent attacks on Turkey — rather than the target of a united IS-PKK attack.

As for Gulenists, their ambition to capture the state led to a bloody coup attempt, and thus created a major security problem for Turkey. But to consider them as the conspiratorial element under every stone, especially after all the great purges following the coup, does not seem realistic. Meanwhile, it is clear that IS considers the Gulenists “infidels,” and allegations of PKK-Gulen ties seem overblown.

Why, then, do Turkey’s current masters insist that all these three different forces are coordinated? Why do they see themselves in a puppet show where all the hostile characters are controlled by a Western “mastermind”?

The first answer to this question is Turkish political culture, which is still largely a relic of the 19th century. Accordingly, world politics is merely a zero-sum game of brutish states, where conflict and conspiracy is the rule, while mutual gain and cooperation is an illusion. The major Western powers always want to weaken and subdue the Turks, and that explains why Turkey faces so much trouble. In this scheme, nonstate actors are never given any agency. They are always explained as pawns of other states. This is a worldview embedded into the Turkish education system, and it has been kept alive by governments that preceded the Erdogan era as well. It is just the way the majority of Turks — more than 75% of them, according to a recent poll — intuitively look at the world.

The second answer is that belief in a global conspiracy against Turkey frees the Turkish government from any responsibility. Had the government examined IS, the PKK and the Gulenists as independent actors, then there would be many questions to ask the government: Why did the government disregard the IS threat for such a long time? Why did the government's “peace process” with the PKK fail — or, if it were such a bad idea, why did it begin in the first place? And why did Erdogan empower the Gulenists in all state institutions for a whole decade until they turned against him? But all such questions evaporate when all answers are found in a collective Western conspiracy against the glorious “New Turkey.”

Finally, there is a third reason that makes the conspiracy theory about terrorism so appealing to Turkey’s new ruling elite: It is a testimony to their grandeur. It is one thing to be targeted by small bands of fanatic zealots. It is another thing to be targeted by the whole world system that orchestrates so much evil. The latter view makes the Turkish ruling elite feel globally important. They are accomplishing a revolution that will transform the whole world for the better, and that is why all the demons of the world are united against them. It is a way of self-aggrandizement.

Yet feeling good about yourself is not enough to solve your problems. In fact, the belief in conspiracy theories rids Turkey’s ruling elite of the capability of effectively fighting terror, as Etyen Mahcupyan, a longtime supporter of Erdogan who lately turned critic, has continuously stated in his column. It disallows understanding the root causes, ideologies and strategies of terrorist groups. It also infringes on the cooperation Turkey could normally have with its Western allies against terror, I would say. But that is neither easily said, nor sanely heard, in today’s Turkey.