Turkish President Recep Tayyip Erdogan and his team apparently see the Middle East not as chaos populated by many independent actors, but as a chessboard whose men are controlled by an unseen power. 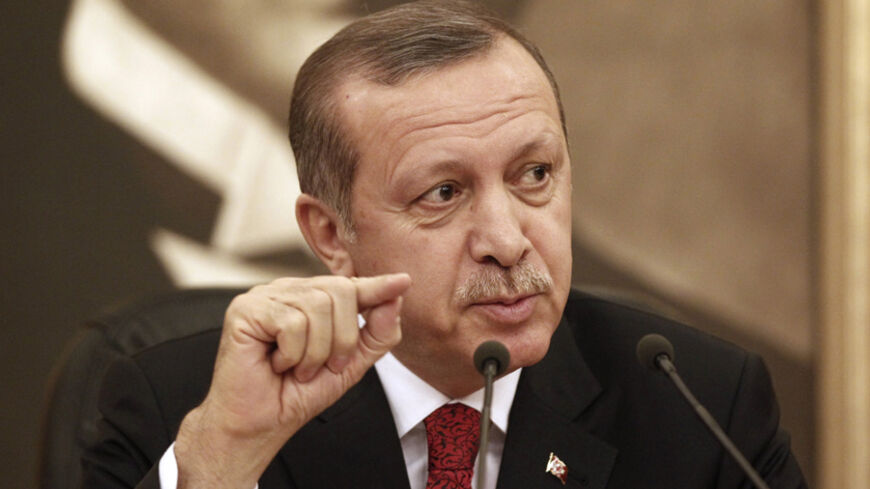 Turkey’s political leaders have the habit of taking journalists into their jets and giving them interviews in the air. Turkey’s President Recep Tayyip Erdogan tends to invite only journalists who support him. During his official trip to Latvia and Estonia Oct. 22-24, he once again had an entourage of sympathetic journalists who took down his important and interesting comments. While addressing the civil wars in Syria and Iraq, in particular the conflict between the Islamic State (IS) and the Kurds of Kobani, Erdogan said that there was a “trap” for Turkey, and no ordinary one.

“We have to think well on this: Probably there is a different logic that set up this trap, this scheme. In other words, I don’t think that the mindset of the PYD [Democratic Union Party, the dominant Kurdish group in Kobani] is that formidable. Probably there is a mastermind. You have to figure that out.”

The Turkish term Erdogan used for "mastermind" was "ust akil," which can also mean “higher intellect” or “supreme mind.” By this, Erdogan apparently implied that while there are various actors in Iraq and Syria — the PYD, IS, the Syrian regime, the Baghdad government — there is a central brain, a planner that controls all these seemingly unrelated actors. They could all have their own agendas, but the “mastermind,” through some unseen mechanism, is using them like pawns on a giant chessboard.

Erdogan spoke openly of this “mastermind” for the fist time, but this conspiratorial view of the world has been promoted by the pro-Erdogan media over the past three years — ever since Turkish foreign policy began to face unexpected troubles. Instead of questioning whether Turkey could be making mistakes or simply accepting that Turkey exists in a very chaotic region, the pro-Erdogan media assumed that the chaos was created intentionally by “imperialist powers,” typically identified as the United States, United Kingdom or Israel.

It's no wonder that when Erdogan told journalists, “You have to figure that out,” the usual suspects were named. Journalist Avni Ozgurel declared on TV, “The mastermind is the United States.” He also argued that Washington wants to create a “Kurdish state in Syria,” which would mean “a new oil pipeline that will bypass Turkey.” Another journalist on Erdogan’s plane during the trip to Latvia and Estonia also identified the “mastermind” as Western powers, pointed to their spies within Turkey and warned of new conspiracies to come.

He wrote, “It seems like this mastermind will resort to any means, even those we cannot think of. This mastermind will be behind the provocation that will shake our resolve. Actions will be taken to directly target the reconciliation process [with the Kurdistan Workers Party]. But they will not succeed. … Colonialist minds will always exist, but no power will be able to make Turkey backtrack from its own path. This includes the mastermind at the top and its partners.”

These are the lines of a single columnist, but they are typical of the dominant narrative in the pro-Erdogan media. The world is described like a giant machine with certain “buttons” housed in Western capitals. When something unpleasant happens in the Middle East, the typical commentary begins by noting, “A button has been pushed.” The assumption is that Western powers are not just among the various actors of the Middle East, they are the puppeteers that manipulate local actors — except Turkey itself, which is, amusingly, the only NATO member in the entire Middle East.

To be fair, this conspiratorial view of the world is not unique to the pro-Erdogan camp. Quite the contrary, almost all other political camps in Turkey share the same outlook, imagining that anything other than their own line somehow must be manipulated by “imperialism.” Until a few years ago, it was in fact Erdogan’s secularist/nationalist opponents who depicted him as a puppet of the “greater Middle East project” of the United States — something that almost everyone in Turkey seems to be sure about, but hardly anyone in Washington can figure out.

But now the pro-Erdogan camp is fully in power and their worldview is influencing Turkish policy. Their suspicion about the “mastermind” is making them quite distrustful of all the suggestions and criticism coming from the West, and even from the opposition at home. (The “mastermind,” after all, has many spies within Turkey, too.)

One dominant theme within this narrative is that the West, in particular the United States, is trying to topple or marginalize all Islamist actors in the Middle East — from the Muslim Brotherhood in Egypt to the Justice and Development Party (AKP) in Turkey. Accordingly, there is also more than meets the eye in the West's attention to Kobani. The AKP media is endlessly asking why the West has suddenly become interested in Kobani. The assumed answer is that the PYD is resolutely secular and therefore deserving of disproportionate Western support.

The bottom line is that the ruling elite of today’s Turkey is deeply distrustful of the West’s intentions in the Middle East. This, arguably, is partly mirrored in the West as distrust of all Islamist actors in the region, including the AKP itself. But this is a vicious cycle that will help no one. For effective cooperation between Turkey and the United States, an honest dialogue between the leaders and foreign policy elites of Ankara and Washington is sorely needed.