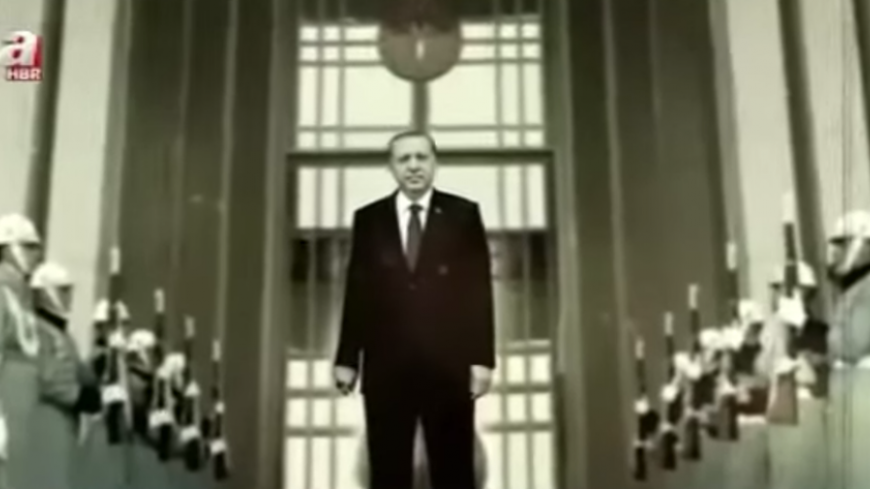 Turkey's President Recep Tayyip Erdogan is seen in this still from "The Mastermind." - YouTube

On March 16, A Haber, a Turkish “news channel” that acts more like a propaganda outlet for Turkish President Recep Tayyip Erdogan and his incumbent Justice and Development Party (AKP), broadcast a sensational “documentary.” Titled “The Mastermind,” the two-hour film was billed as an expose of the great international conspiracy targeting Erdogan’s “New Turkey.” It was also a sequel to "The Protocols of the Elders of Zion," the early 20th century anti-Semitic hoax claiming to describe a Jewish plot for global domination.

Erdogan himself introduced the very term "mastermind," or "ust akil," to Turkish political language some five months ago, as I explained in Al-Monitor. No wonder the A Haber documentary (available here in full) begins with Erdogan telling his followers in a speech: “Don't be misled. Don't think that these operations are against my persona, our government, our party. Friends, these operations are rather directed against Turkey itself — its unity, its peace, its economy, its independence. And as I have said before, behind all these steps there is a mastermind. People ask me, ‘Who is this mastermind?’ Well, you have to figure that out. And actually, you know what it is.”

It is implied that the documentary is a response to Erdogan’s call, that it has “figured out” the identity of the mastermind, which many Erdogan supporters already know: It is “the Jews.” Theirs is the mind, the documentary tell us, that “rules the world, burns, destroys, starves, wages wars, organizes revolutions and coups, and establishes states within states.”

To explain why Jews do all these horrible things, the documentary goes back 3,500 years, right to the time of Moses. It describes the Exodus from Egypt, lists the Ten Commandments and mentions the Ark of the Covenant. Turkish academic Ramazan Kurtoglu then explains that Jews are very angry today because the Ark of the Covenant is lost. That is why, he argues, when the United States occupied Iraq in 2003, the real plan was to search for the old manuscripts that would help the Jews find the Ark. (It is hard to understand why “Jews” would dislike other people because their ark is missing; you just have to trust the documentary on that.)

The film then jumps to three “important figures,” or three great Jews, who supposedly left their mark on world history. The first is Maimonides, a “rabbi” who allegedly argued that “Jews are masters, other human beings are slaves.” The second is — guess who — Charles Darwin, who the documentary confidently describes as Jewish. (This is of course wildly inane and ignorant, for Darwin was born and raised a Christian.) Then comes Leo Strauss, the American political thinker whose ideas inspired the neoconservatives.

Then we hear from a series of Turkish “experts” who explain how “the children of Israel” want to dominate the world, subjugate other peoples and thus surround the world like a “giant octopus.” A “historian” asserts that Darwin proposed his theory only to depict non-Jews as “animals” — an idea that he believes is rooted in Judaism. At every stage, the film reminds us how the Judaic “mastermind” has oppressed humanity for thousands of years, making the world a stage for a perpetual war between good and evil.

After all these shocking revelations, the documentary arrives at the real subject: Turkey. We are told that the mastermind is particularly worried about Turkey and hates to see it as an “independent” power disrupting all its evil schemes. The Ottoman Empire collapsed due to the conspiracies of the mastermind, we are told, and the politics of Republican Turkey have been constantly manipulated. Every military coup or political assassination in Turkey was organized by the mastermind, who toppled great leaders such as Sultan Abdul Hamid II, Adnan Menderes and Turgut Ozal. But now the mastermind is more worried than ever before, because Turkey is finally breaking its chains under the glorious leadership of Erdogan.

All in all, the “documentary” is a piece of anti-Semitic bilge. Although it is not an official AKP production, there is no doubt that it is pro-AKP (and pro-Erdogan) propaganda. Among the “experts” who speak in the film are AKP grandees such as Yigit Bulut, top adviser to Erdogan, and Etyen Mahcupyan, top adviser to Prime Minister Ahmet Davutoglu. (To be fair, Mahcupyan, a Turkish Armenian, does not seem to endorse the rhetoric about Jewish conspiracies, but he does not oppose it either.)

What does this mean? Is the AKP clearly an anti-Semitic party now, threatening Turkey’s tiny Jewish community? Well, one could make counterarguments. Since the AKP came to power in 2002, Turkey’s non-Muslim communities, including Jews, have enjoyed some significant reforms. The AKP leadership also gathers the leaders of “minority communities” and delivers embracing messages, such as in the Jan. 2 meeting held by Davutoglu. Just last week, Erdogan made a "get well soon" call to Turkey’s chief rabbi. Moreover, the real target of the A Haber film seems to be the Jews' Turkish “spies” rather than Jews themselves. The bulk of the film demonizes the Gezi Park protesters and the Gulen movement, which are seen as Erdogan’s “enemies within.”

Still, there is no doubt that this shameful film represents a new and dangerous low in AKP propaganda, which, in the past two years, dramatically turned into a factory of political hatred and paranoia. It certainly alarms Turkey’s Jewish community, and worries the millions of “Jewish spies,” i.e., Erdogan's political opponents. Moreover, it only makes the already conspiracy-prone Turkish society more delusional, making Turkey a growingly irrational and irrelevant country in the world.