Erdogan plays to base by slighting Armenians

Turkish Prime Minister Recep Tayyip Erdogan's history of anti-Semitic remarks and a recent insult directed at Armenians are a tactic to draw votes. 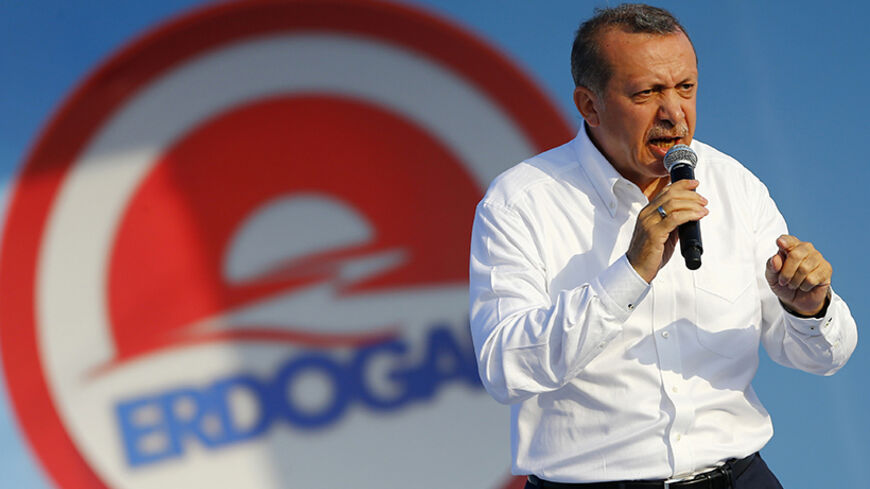 Steven Cook, a senior fellow at the Council on Foreign Relations with a reputation for expertise on Turkey and Egypt, wrote an article for Politico Aug. 5 headlined, “What a Turkey! Has the Turkish leader lost his head?” The article discussed the alleged anti-Semitism of the Turkish prime minister, currently running for the presidency.

Cook’s article begins, “If Turkish Prime Minister Recep Tayyip Erdogan were an American politician, he would be an excellent candidate for one of Chris Cillizza’s 'Worst Week in Washington' features. First, on Friday, July 19, a day after the State Department spokesperson criticized him for his frequent invocation of the Nazis to describe Israel’s behavior, Erdogan asked, 'What do Americans know about Hitler?' Given that almost 200,000 young Americans died fighting in Europe during WWII, quite a lot, actually.”

In the article, Cook refers to Richard Cohen’s Washington Post column about “Erdogan’s 'Hitler fetish,'" in which Cohen questioned whether Erdogan had lost his mind.

Cook gave his personal opinion of Erdogan, writing, “Having an over-inflated sense of self comes with being a world leader, and he’s has been in the bubble for almost 12 years. And for all of Erdogan’s seeming public decomposition, there is actually a perfectly rational and sane politician astutely advancing his agenda, which at the moment is focused on becoming Turkey’s next president. … When it comes to anti-Semitism, Erdogan is guilty as charged, but sadly so are large numbers of Turks. It is true that Jews found refuge in Turkey during the Inquisition and have lived and prospered there ever since, but that does not mean that anti-Semitism is alien to Turkish culture."

Cook naturally couldn’t have imagined that what Erdogan would go on to say about Armenians would dwarf his remarks about Israel. On the night of Aug. 5 in a joint transmission by NTV and Star TV, he was reminded that in an election rally, main opposition leader Kemal Kilicdaroglu had said that he is an Alevi, Kurdish presidential candidate Selahattin Demirtas had announced that he is a Zaza and that Erdogan himself had cited his Sunnism. Erdogan blurted a reaction that instantly generated a passionate public debate in Turkey.

Turkish traditional and social media went wild next day with reports of how on Aug. 11, 2003, in an official visit to neighboring Georgia, Erdogan had said, “I am also a Georgian. Our family is a Georgian family that emigrated from Batumi to Rize.” Thus the source of the allegation that he was Georgian was Erdogan himself. Clearly, he did not find any ethnic identity other than Turkish healthy for his electoral fortunes a few days before the vote.

But it was not his denial of Georgian origin that triggered the passionate public debate. It was the way he phrased the Armenian identity. His remark, “Excuse me, but they have said even uglier things. They have called me Armenian," was taken as an example of hate speech and an unjustifiable insult to the Armenian identity, and the public erupted in exceptionally harsh reactions.

On Aug. 6, a group of well-known Turkish-Armenian intellectuals and business people cynically calling themselves “Excuse us, Armenians” issued an articulate statement that read, “For years we were forced to shout out that we are Turkish. But we never found it ugly. We found it wrong. We were upset being persistently told who we are. … Did we have any enemies of Turks, any racists among us? Of course we did, as much as any other nation. But we didn’t crown these racists.”

The statement ends with the following lines that would break the heart of any conscientious person: “As a people whose ancestry has been pulverized, we continue to live quietly as a diaspora on our own land. Stop baiting us, enjoy your life. Continue to live your life until the day we Armenians, Greeks, Syriacs, Turks, Kurds, Circassians, Georgians, Alevis, Christians, Jews and Muslims, with our brethren who vote for you or not, prove that we can do better than you.”

The unforgettable symbol of Armenian identity in Turkey, Hrant Dink, was assassinated in 2007, and his funeral was at the time the greatest mass demonstration ever in Istanbul. His weekly Agos newspaper carried a photo of Erdogan on its Aug. 7 front page, accompanied by headline, “May Allah Forgive You.” The piece read, "So now this happened, too. Presidential candidate Prime Minister Recep Tayyip Erdogan did not find it enough to declare he is a Turk but also announced he is not an Armenian, with a grimace of disgust.

“Perhaps all of us living in this country are very lucky. You never get bored. There is always an opportunity to amuse ourselves with a further beguiling diversion and our share of hatred narratives. … Of course, no ethnic identity is a cause of pride or shame by itself. Such generalizations can only be the product of a racist mindset. We know very well that in addition to the estimated 50,000 Armenians in Turkey, there are thousands of people of Armenian ancestry living in this land. Our small number and the need for many to remain secret Armenians are the bitter heritage of the 1915 Armenian Genocide. What we want to say it that there are so many other issues to ask for Armenians' forgiveness. But there is no one apologizing or asking for our forgiveness. To the contrary, the burden of discrimination gets heavier by the day. When the prime minister finds being an Armenian ugly — excuse us — some people are ready to don their white berets [as ultranationalists] and threaten Agos with impunity. The holy Quran says people were divided into nations and tribes so that they can get to know each other. We wonder if the prime minister is aware of the values he is trampling on with his remarks. What else is there to say, except, may God forgive his transgressions."

Cook concluded his article, “Erdogan will leave nothing to chance.

"This is not to excuse Erdogan’s recent Jew-baiting or an entire previous year of intimidating his opponents, cowing the press, restricting access to the Internet, purging the bureaucracy and banning (unsuccessfully) social media. These are the tactics of a tin-pot dictator, not a major NATO ally, but Erdogan does not care. Behind the bluster and thuggish politics is an effort to secure the domestic political arena. To the extent that this approach plays well among voters in Kayseri, Trabzon and Erzurum, Erdogan will reap the benefits.

"From afar, Erdogan certainly seems crazy, but he is more likely crazy like a fox.”

One can substitute “recent Armenian-insulting” for “recent Jew-baiting” and Cook’s judgment remains applicable.

Erdogan, in terms of domestic politics, as a political mastermind, can be elected president but his alleged anti-Semitism and his insulting remarks on the Armenian identity will haunt him all him all the way, particularly in 2015, the 100th anniversary of what Armenian communities all over the world remember and depict as a genocide.

Turkey, thanks to the "great master" and "strong leader's" unscrupulous attitude and hate speech toward religious and ethnic minorities, appears destined to suffer constant headaches in the international arena.