Why Did Al-Qaeda-Linked Group Hit Turkish Embassy in Somalia? 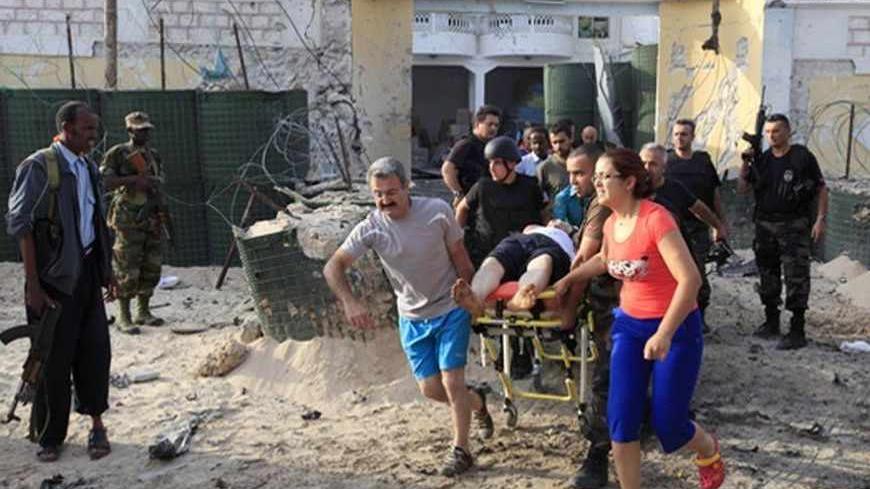 Staff of the Turkish Embassy carry their wounded colleague on a stretcher after a suicide car bomb attack at the gates of an office housing embassy staff in Somalia's capital, Mogadishu, July 27, 2013. - REUTERS/Feisal Omar

On July 27, the Turkish Embassy in the Somali capital Mogadishu was hit by a suicide car bomb attack. One Turkish security officer was killed and three others were seriously wounded. Soon, al-Shabab — an al-Qaeda-affliated militant group — claimed the bombing on its Twitter account. They said that Turkey was targeted for “supporting the apostate regime [in Somalia] and seeking to suppress the Sharia order.”

Arguably, it is not too difficult to understand why al-Shabab is hostile to Turkey. The organization — whose name means “youngsters” in Arabic — is fighting against the central government in Somalia, which enjoys the support and friendship of Ankara. Since 2011, when Prime Minister Recep Tayyip Erdogan became the first non-African leader to visit Somalia in nearly 20 years, Turkey has poured $400 million of aid to this Muslim nation traumatized by famine and civil war. The growing Turkish presence in Somalia is welcomed by most Somalians and their government, but not by al-Shabab which condemns other Muslims as “apostates” simply for not accepting their harsh and militant creed.

So, it might well be concluded that Turkey’s goodwill in Somalia has been hit by a group of religious zealots. But, well, not all Turks think like that. Some writers in the Turkish media, especially in newspapers that support the government, argue these days that al-Shabab must be seen only as a “subcontractor,” and “its bosses behind the scenes” must be taken into account. And these “bosses” are, of course, Western powers.

Ibrahim Karagul, the editor-in-chief and a columnist for daily Yeni Safak, makes his argument in his Aug. 1 piece titled “The terror contract, London and Turkey's War in Somalia.” Accordingly, the power that hit Turkey’s embassy in Mogadishu is actually not al-Shabab, but “the European Union, our partners, England, France.” These countries, Karagul argues, are disturbed by Turkey’s increasing role in Africa, and hence they are giving a warning message to Ankara via al-Shabab’s bombs:

“They are saying, ‘What are you doing in Africa, go and deal with your own problems, do not go outside of Anatolia.’ They are encouraging terrorist groups to attack elements of Turkey. They are doing this to cleanse us from the region, and they are doing this openly.”

Insisting that Turkey is being attacked “by its own [Western] allies,” Karagul assures his readers, “Do not focus on who pulled the trigger, who threw the bomb. Do not mind that. Just look at those who commissioned the job.”

Notably, Karagul does not show any evidence proving that the EU and its prominent members such as France or the United Kingdom really “commissioned” al-Shabab to attack the Turkish Embassy in Mogadishu. But, well, he does not need to. The view that all terrorist organizations in the world are actually orchestrated by Western powers is a very widespread belief in Turkish society. (Those who dispute this view can also be blamed to be the agents of the same evil powers, as I have encountered firsthand over the years.)

Another writer, Sedat Laciner, who writes for daily Star, also presents a similar analysis of the Mogadishu attack in his piece titled “The message that is given to Turkey.” He argues:

“Turkey’s Middle Eastern policy, which is independent from and alternative to the West, is worrying the real owners of the [world] system. This is one of the reasons why Turkey is left alone in Syria and Iraq, and is asked not to involve too much in the affairs. As long as Turkey insists on change, somebody will try to put Turkey outside of the system. The terror attack of the Turkish Embassy in Somalia is one of the clearest signs of this. It cannot be considered as a simple attack by al-Shabab. Turkey has been told, ‘Know your limits, get out of our way.’”

Again, why we should not consider an attack claimed by al-Shabab “as a simple attack by al-Shabab” is not very clear. Instead of a factual basis, it rather seems to be based on Turkey’s popular notions about “the world system”: a giant machine whose trivial arms such as al-Shabab — or the whole al-Qaeda — are controlled by a central intelligence concentrated in certain Western capitals.

These are only two examples of various comments that have appeared in the Turkish media since the Mogadishu bombing, and which all have underlined the same theme: Al-Shabab must be just a “subcontractor,” and there must be Western forces behind it. And while this is a reflection of Turkish age-old political culture — in which non-state actors are always attributed to states — it also is a manifestation of the new outlook among the government and pro-government circles: A deep suspicion toward the West and its intentions about Turkey.

This trend has some precedents, but it erupted with the Gezi Park protests. While the government perceived these mass demonstrations as a “coup attempt” that deserved being subdued by the police, most Western governments supported the protesters or at least their right to protest. On the government side, this led to conspiracy theories which depicted the whole Gezi Park affair as a Western plot to destabilize and weaken Turkey. Soon, the coup in Egypt further deepened the distrusts in Ankara: The mass protests in Cairo indeed turned into a military coup, which has been tolerated, and even sugarcoated, by the West.

In short, a very deep suspicion about the West is running high in Turkey these days, especially within the pro-government circles, as the readily attribution of the al-Shabab attack to the West shows. Those who care about Turkey’s relations with the West should take this into account and think of ways for confidence-building. More dialogue between the Western political elites and their Turkish counterparts might be a step forward. Turkey is just too important to be left to its own fears.