Pro-government Turks who support Qatar have been hesitant to directly blame Saudi Arabia for the recent intra-GCC rift, preferring instead to scapegoat US intelligence services and President Donald Trump. 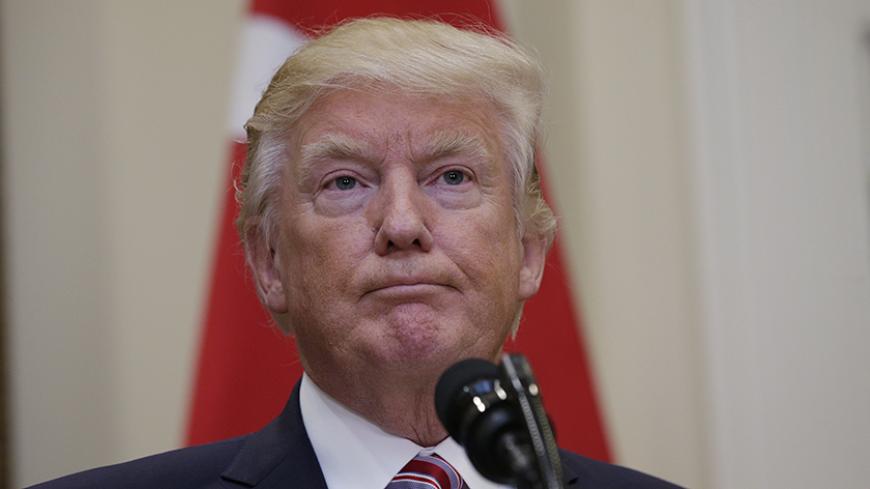 US President Donald Trump listens to Turkey's President Recep Tayyip Erdogan as they give statements to reporters in the Roosevelt Room of the White House, Washington, May 16, 2017. - REUTERS/Kevin Lamarque

The election of US President Donald Trump was neither a surprise nor an unpleasant event for Islamists in Turkey. To the contrary, the Justice and Development Party (AKP) and Turkish President Recep Tayyip Erdogan were making extra efforts to cheer for their newly elected American colleague. Erdogan’s 22-minute March meeting with Trump, despite being a fiasco on multiple fronts, was portrayed as the beginning of an affectionate personal relationship. Pro-AKP media refrained from using negative language against Trump.

However, the tide took a stark turn with the Qatar crisis. As several Arab countries, including Saudi Arabia, Bahrain, the United Arab Emirates (UAE) and Egypt, cut diplomatic ties with Qatar, Erdogan decided Turkey would stand with Qatar. Pro-AKP trolls took social media by storm with their #TurkiyeKatarKardestir (Turkey and Qatar Are Brothers) hashtag.

As AKP trolls and newspapers were trying to figure out how best to rally public support for Turkish deployment of troops in defense of Qatar, their mobilized reactions provide us clues about Erdogan's future plans.

A crucial common point in Erdogan’s speeches and pro-AKP columnists and social media trolls is to refrain from directly criticizing Saudi Arabia. If you follow the Qatar crisis exclusively on pro-AKP media outlets, you may not even be aware of the fact that Saudi Arabia is the main interlocutor in all this. Rather, you are made to believe the problem is the United States — more specifically, Trump.

At the start of the Qatar crisis, the government-paid troll army and media immediately branded the crisis as a US attack on the Muslim Brotherhood. Gates of anti-Trumpism in Turkey are now open, and Trump-bashing is increasingly becoming popular. Not only Islamists but also leftist groups find comfort and joy in blaming the United States for all things wrong in the Middle East. Here are some examples from the media:

On June 6, Trump’s tweets on Saudi Arabia's and other Arab states’ decision to target Qatar made the waves on Turkish social media. Milliyet reported these tweets by saying, “Now it is revealed who pressed the button. Trump targeted Qatar.”

Several examples of anti-Trump statements dominated the media on June 9.

For instance, a headline from the pro-AKP daily Takvim read, “Trump’s scandal declaration about Qatar.” The story continued with anti-American statements, such as “The United States, known well for its support of terrorism, continues its two-faced declarations.”

The Star Daily, whose owner is now a member of the AKP’s top decision-making unit, had on its first page Trump’s notorious globe photo with the Saudi king and Egyptian President Abdel Fattah al-Sisi. The title said, “We cracked that globe.” The subtitle read, “Erdogan broke the siege of Qatar through intense phone diplomacy, opposition to the sanctions, accepting the visit of the Iranian minister, passing the legislation to send troops to Qatar and sending food aid.”

Yusuf Kaplan, a provocative Yeni Safak columnist, listed earth-shattering US goals such as getting Muslims to destroy each other, cutting off communication between different Islamist movements and replacing Muslim states with city-states. Kaplan concluded that to defend Islam, one cannot stay silent against the attack on Qatar.

On June 11, Ferhat Unlu, a columnist for Sabah Daily, titled his piece “Trump’s sword dance with the deep state.” Unlu claimed the United States is controlling the Gulen movement and that the new director of the FBI would be pro-Gulen.

One of Yeni Akit's prominent writers, Ali Karahasanoglu, urged the government to cut off all relations with the United States because it was providing weapons to the Kurdish groups in northern Syria. The piece was published almost a month after Trump’s announcement to arm the Kurds and a few days after the Qatar crisis.

Yeni Safak on June 14 referred to the United States as the “Gangster United States." The columnist, Tamer Kormaz, referred to Trump as “the enemy of Islam,” which is posted in bold letters. On June 6, the same columnist penned a piece titled the “US is not our ally, but our enemy,” and throughout the piece the United States is referred to as the “engineer of terror” with the “US flag symbolizing terrorism.” It reads, “Behind the July 15 Gulen coup attempt is NATO and the US.”

There were dozens of tweets about Trump’s invitation extended to the Qatari emir as being a setup or a trap, congratulating the emir for his refusal to go. The common theme in all of these columns, reports and social media posts was that the United States is the culprit of all the troubles in the Muslim world, and that it supports terror and cannot be trusted. Several tweets alleged that the purpose of the United States was not to end terror but to get money from Qatar.

Why is the crisis between Qatar and the Gulf Cooperation Council (GCC) being presented in such a light while any direct criticism or even mention of Saudi Arabia is so diligently omitted? One of the reasons is the possibility that Erdogan could flip-flop on his promise in his savvy way, as he has done with other cases. Whomever Erdogan calls his brother could potentially become a threat — Fethullah Gulen and Syrian President Bashar al-Assad are prime examples. Knowing well that Saudis will not tolerate any sort of demeaning and belittling allegations, Erdogan — who is ever so fluent in anger — is now urging Saudi Arabia to act as an older brother. Trying and failing utterly to act as the mediator, Erdogan has referred the crisis to the Saudi king and asked him to act as the peacemaker, referring to him as the "elder of the Gulf."

Another possible reason is that Turks really do not know the differences between the GCC states. For example, although protests are banned under emergency law, a group of pro-AKP protesters marched in Taksim Square at the heart of Istanbul with bright, red-colored Bahraini flags in solidarity with Qatar. Yet they were under the assumption that they were displaying the Qatari flag, which is burgundy and white. Although Turkey has developed rather complex relations with Qatar, the UAE and Saudi Arabia due to the lack of transparency, the Turkish public is not aware of how the UAE and Saudi Arabia have become challenges for Turkey over the last couple of years. Now, slowly, the Turkish media are portraying Qatar as a friend who stood by Erdogan during the July 15 coup attempt, while the UAE is likely to be one of the forces behind the attempt against Erdogan. Yet Turkey refrains from targeting the Saudis.

At this point, the United States presents itself as the easy target. With already skyrocketing levels of anti-Americanism in Turkey, it is not difficult to put all the blame on the United States to rally the public. The interesting observation here is how fast pro-AKP figures went from applauding and cheering Trump to scapegoating him. Trump-bashing is seen as a lower-cost activity than criticizing the Saudi king in Turkey. Yet the unknown here rests with Trump: Will he tolerate the increasing Turkish hatred and wild criticism?

Correction: (June 15, 2017): An earlier version of this article misstated Ali Karahasanoglu’s affiliation. He writes for Yeni Akit, not Yeni Safak.