Odd logic and pro-government leanings lead some Turkish media outlets to embrace theories of IS intrigue. 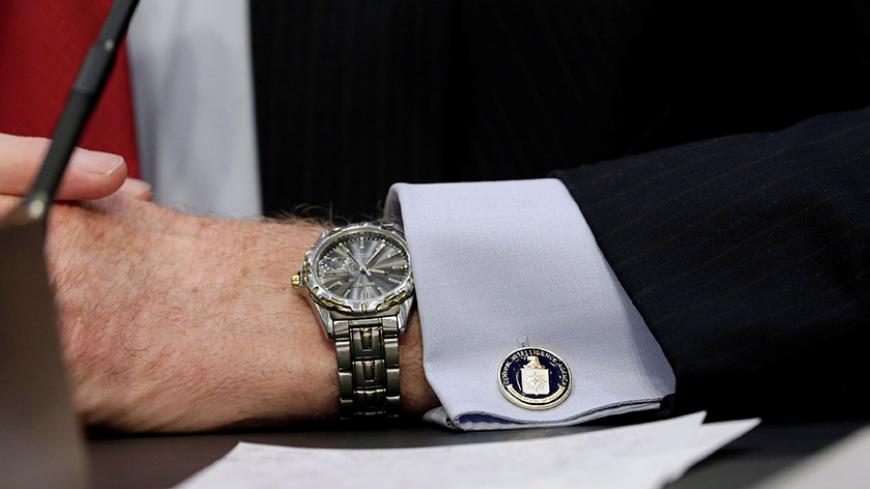 A cufflink with the CIA logo is seen on CIA Director John Brennan's shirt as he testifies before the Senate Intelligence Committee hearing on "diverse mission requirements in support of our national security," in Washington, June 16, 2016. - REUTERS/Yuri Gripas

When Istanbul Ataturk Airport was attacked by three suicide bombers June 28, Turkish Prime Minister Binali Yildirim appeared on television and said, “Early signs indicate the Islamic State [IS]” was responsible. In the following days, further evidence and arrests by Turkish security forces confirmed a well-planned IS attack. In addition, on June 29, CIA Director John Brennan concurred with the Turkish authorities in an interview, also warning there could be similar attacks on American soil.

Yet, conservative, pro-Justice and Development Party (AKP) media outlets are presenting a rather different picture.

"The CIA was behind the attacks!” That was the headline of pro-AKP Islamist Yeni Akit daily on June 30. The headline was based on an opinion piece published the same day by the pro-government Takvim daily titled “CIA and the false flag again.” Takvim columnist Ergun Diler said men who have previously been connected to the CIA carried out all the previous attacks in Boston, Paris and Brussels.

With mind-numbing logic, Diler explains the situation as part of World War III, organized around false-flag operations of the CIA. In the piece, he also makes reference to undisclosed foreign experts who have argued that “Turkey is a stronghold of the CIA, where the agency can carry out an attack every other day.” Diler argues that three countries — Turkey, France and Russia — are paying the price for standing up against the United States.

Diler is not alone in his allegation of CIA-planned Islamist terror attacks. On the same day of Diler's analysis, several op-eds appeared in unison in pro-AKP media outlets directly blaming the attacks on the United States in general and the CIA specifically. Indeed, since June 29, almost all pro-AKP media have featured two types of analyses about the Istanbul airport attack: One, like Diler, directly and clearly blames the CIA; the more mellow versions suggest IS is a pawn of imperial forces. Here are some interesting arguments from these dailies.

On June 30, from Yeni Akit, Ali Karahasanoglu penned a piece titled “Whoever gave IS the brand-new Toyotas is the culprit.” Karahasanoglu wrote, “When we say IS, I think of men with guns and Toyota pickup trucks.” Questioning where these trucks came from, Karahasanoglu discards the possibility that the United States provided the trucks to the Free Syrian Army, which then lost them to IS. He concludes that the trucks are clear evidence of US involvement. Then he argues that the United States showed its jealousy of the Russian-Turkish rapprochement by bombing the airport. He repeats a popular argument that IS is merely a pawn.

Another striking piece comes from columnist Ibrahim Karagul of the conservative daily Yeni Safak. Karagul’s piece is titled “This is not terror but a multinational attack: Turkey never kneels down!” Karagul warns his readers about internal and external threats working to conquer and divide Turkey. He concludes that the attacks are intelligence operations, but he can't quite say whether a Western or Eastern agency is behind them. However, he is confident that the hands that control the Kurdistan Workers Party (PKK) in Turkey, the Kurdish Democratic Union Party in Syria and IS are the same.

Posted on June 30, another Yeni Akit columnist, Mehtap Yilmaz, starts her column by asking, “Is there anyone who does not know IS is a project created at Mossad-CIA laboratories?” Indeed, Yilmaz expands the conspiracy even further, saying that not only are the PKK and IS products of foreign forces, but also the Gulen movement. Yilmaz’s fellow columnist Ahmet Varol on the same day published a searing piece arguing IS was created and used by international imperialist forces to destroy Muslim societies from within. On July 7, as further IS attacks — focused particularly on Baghdad — took place during Eid al-Fitr, a holiday marking the end of Ramadan, Varol titled a new piece “Eids that are bombed,” where he argued that, though IS’ real target is Muslims, “global imperial forces focus on Islam, not on marginal or extremist attitudes, [when] explaining these attacks to their own public.”

The immediate effects of these arguments were also seen on social media, where photos of Brennan were posted with the allegation that he was responsible for the blood spilled at the Istanbul airport.

All of this raises a daunting question. Turkish authorities have openly declared IS as the culprit, while pro-government media outlets — which traditionally refrain from publishing arguments of which the government does not approve — almost turn the official statement about IS involvement on its head. Why do pro-government media following the Istanbul attacks struggle so much to muddy the waters and virtually clear IS?

There are at least two possible explanations for this puzzle. First is the increasing sympathy toward the idea of a caliphate and people's difficulty in accepting a link between Islam and terror in Turkey. Second is the failure to accept how Turkey's foreign policy mistakes have increased its security vulnerabilities.

IS is known to claim attacks where the targets are Shiite mosques or shrines in Muslim-majority countries. But one of the reasons IS is not claiming responsibility for its attacks on Sunni-majority targets is to avoid hurting its credibility and recruitment rates among Sunnis. Next is its inability to explain how even the word "Islam" can be linked to IS atrocities for the majority of practicing Muslims. That is why conservative columnists almost always bring the PKK and other armed non-state groups into their arguments. Even when they accept that IS pulled the trigger, they insist on posing questions such as, "But who provoked IS?"

Omer Gergerlioglu, a columnist for the website T24, told Al-Monitor, “Islamists in Turkey are not yet able to face the music. That's why they insist IS is a pawn of foreign forces. Yet, when asked, ‘Would someone blow himself up just to please the foreign forces?’ they have no proper answer, because they have not thought these conspiracy theories through thoroughly.”

Gergerlioglu makes another crucial point — that whitewashing IS could lead to a rise in the number of IS sympathizers and members. He said, “When pundits in prominent media outlets repeatedly generate conspiracy theories, how can we expect the public to react?”

Why, then, would these media outlets resort to such confusing conspiracies? Soli Ozel, a professor of international relations from Kadir Has University, wrote an opinion piece noting that in domestic politics, the government in Turkey is almost the exclusive gatekeeper of the news, but in foreign affairs it's not so easy to silence other countries’ media outlets. Hence, in international circles, the government is ready to openly blame and hold IS accountable for its atrocities. Domestically, the pro-government media insists it must be the CIA.

Ozel suggests that Turkey's first step in adjusting its handling of foreign policy matters should be to discuss them without turning them into populist slogans for domestic audiences.

This confusion indeed has led to quite preposterous results. On July 7, Yeni Akit posted a piece of news titled “Western fashion world supports IS,” in which it claimed last year’s fashion week in New York included a show inspired by IS — indicating Western support for IS.

In the same news item was the claim that IS uses a brainwashing technique developed by the CIA to recruit rich kids into its ranks. The news even had a photo of an IS fighter with expensive gear — not to fight, but to hang out in affluent cafes to generate recruits. How does IS lure so many foreign fighters? The secret, according to this news report, is in the expensive fashion items: jeans costing almost $700 (2,000 Turkish lira) and $1,200 (3,300 Turkish lira) shirts, for starters.

Desperate times in Turkish politics are creating increasingly ridiculous news reporting that may have harmful consequences in the near future.