Let's hope Turkey can afford its alienation of Saudi Arabia and Saudi allies for the cause of Jerusalem. 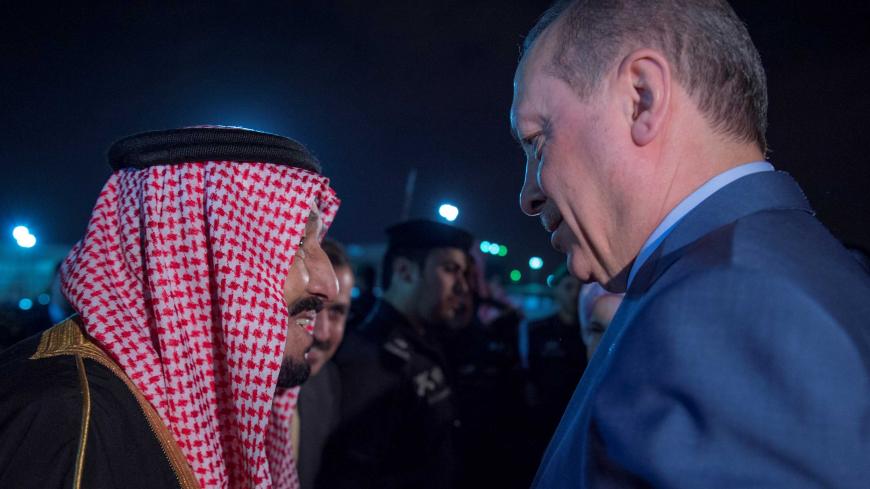 Turkish President Recep Tayyip Erdogan is not known for his diplomatic diligence when it comes to criticizing in the name of Islam. For quite a while, Saudi Arabia was the only country around which Erdogan and his advocates treaded rather carefully. Even during the Qatar crisis in June, Erdogan directed his displeasure toward the United States and struggled to convince Saudi Arabia, without angering the kingdom, to end the crisis.

Those days are over. Saudi Arabia no longer enjoys immunity from being thrashed by media who favor Erdogan and his Justice and Development Party (AKP). On Nov. 9, speaking at the Organization of Islamic Cooperation (OIC) summit on women’s entrepreneurship, Erdogan targeted Saudi Crown Prince Mohammed bin Salman’s commitment to lead his country to "moderate Islam." Erdogan said, “They are now trying to pump up this idea again. What is that? Moderate Islam! The patent on the term ‘moderate Islam’ belongs to the West." Then Erdogan delivered a line he has said before: “Islam cannot be [classified] as moderate or immoderate.” Erdogan even went on to ridicule the Saudi regime for promoting moderate Islam when it didn't even allow women to drive until recently.

The gates of full-fledged criticism were opened Dec. 6 when US President Donald Trump officially announced his decision to move the US Embassy from Tel Aviv to Jerusalem.

On Dec. 5, pro-AKP newspaper Sabah’s outspoken columnist Hilal Kaplan tweeted about a New York Times article titled “Talk of a Peace Plan That Snubs Palestinians Roils Middle East” and commented, “Now pretending to react, [this piece alleges] Saudi Arabia indeed accepts the agreement where Trump declares Jerusalem Israel's capital, making illegal settlements permanent and destroying the right of return for Palestinians. These are not unexpected from the crown prince.” On Dec. 8, Kaplan retweeted detailed Turkish reporting of the same piece. She then posted in English, commenting on a video about what influenced Trump’s Jerusalem decision. She concluded it was in part the "bromance" between Prince Mohammed and Jared Kushner, Trump's son-in-law and a senior adviser.

On Dec. 13, Kaplan posted two consecutive tweets directly linking Israel and Saudi Arabia and openly ridiculing the crown prince. She wrote, “When the [OIC] made the decision to recognize Palestine as a state, the Israeli intelligence minister invited Crown Prince Mohammed bin Salman to Israel and declared him 'the leader of the Arab world.' The one that made the declaration is the minister of Israeli intelligence! The Arab [public] must have been convinced," she joked. Then she added, “Will the Islamic world recognize a 30-year-old man as its leader, who is known for his worldly indulgence, has paid no price for anything and has not sided with the Muslim world on any subject matter and whose name no one knew a year ago? Either the Israeli government has lost its marbles or they are really desperate.” Finally, on Dec. 14, Kaplan penned a searing piece for Daily Sabah in English titled “How Desperate Is Israel?” She openly labeled Wahhabism — the kingdom's leading form of Islam known for being ultraconservative and intolerant of those who believe differently — as “the source of almost all radical Islamic ideologies.” This sort of a statement was unthinkable for the Daily Sabah to publish only a year ago.

Kaplan was not alone in openly and directly targeting Saudi Arabia and its allies in the Gulf. Here are a few examples of reporting from pro-AKP media outlets since Trump’s Jerusalem decision:

Turkish social media was also up in arms that Saudi Arabia participated in the OIC Istanbul at the ministerial level along with the United Arab Emirates (UAE) and Egypt. Several readers who commented applauded Venezuelan President Nicolas Maduro's attendance at the Istanbul summit, while prominent Arab leaders were absent.

Yet the most interesting interpretation of all these came from Burhanettin Duran — the general coordinator of the Foundation for Political, Economic and Social Research (SETA), an Ankara-based think tank with close links to the AKP, and a columnist for Sabah. Duran’s piece was titled “Jerusalem Summit and Saudi’s Loss of Legitimacy.” He argued that the Istanbul submit obliged Saudi Arabia to condemn Trump’s decision. Duran repeatedly highlighted the alliance among Washington, Tel Aviv and Riyadh, sometimes adding in the UAE and Egypt as well. The piece emphasized Saudi mistakes in Lebanon and Yemen. Duran claims the leadership of the Muslim world has shifted to non-Arabs, particularly to Iran and Turkey.

Despite the AKP-cheering statements of Duran, senior Turkish bureaucrats who have been following the Saudi media outlets, as well as the kingdom’s actions snubbing Turkey, were more sober, clear and analytical in their evaluations. All bureaucrats spoke on the condition of anonymity. One senior bureaucrat working for the security establishment told Al-Monitor, “Saudi Arabia has serious internal problems for which it seeks to find cover [by] destabilizing the region. Yemen, Lebanon and Qatar are vivid examples of this policy. The aggressive and high-risk rollers are in charge now in the kingdom, and that's against Turkish policies. We are yearning to establish a stable region, going back to the pre-2011 balance. That is why we supported the Astana process,” he said, referring to Syrian peace negotiations in Kazakhstan.

“Saudi Arabia along with the UAE openly supports the PKK with the justification of aiding forces against Iran. That is causing direct harm to our national interests,” a junior bureaucrat added. When asked about why Turkey could not work in tandem with Saudi Arabia and its allies in the region, a senior bureaucrat commented, “We cannot keep investing in a losing cause. Saudi Arabia’s allegedly anti-Iran policies in Yemen indeed strengthened Iran’s power in Yemen. Qatar and Iran were pushed together. They [Saudis] caused Sunnis to lose power in Lebanon. So beyond all the talk, indeed, Saudis are pushing for the expansion of Iranian influence in the region.”

Turkish officials and pundits seem to agree the hotheaded crown prince’s sudden rise to power is to blame for the strain on Turkish-Saudi relations. Not long ago, the Turkish political elite was silent about the legitimacy of Saudi Arabia in the Muslim world, but now voices are emerging to urge Erdogan to first reclaim Mecca and Medina (two holy cities of Islam in Saudi Arabia) from the Saudis. As one Twitter user wrote, “Israel will keep winning in Jerusalem as long as we cannot save Mecca and Medina from the Saudis.”

While the pro-AKP media is jubilant to not have to become like Saudi Arabia and Egypt and is proud to stand up for Jerusalem and for having the courage to criticize Saudi Arabia directly, one cannot help but ask: What about the price paid for the tacit alliance and complacency with Saudi policies since 2011?

As the Turkish security elite see it, clearly Iran has again emerged as the winner of all these intra-Sunni conflicts. Will blaming it on all Wahhabis help Turks wind up on the winning side? Did Turkey establish a solid basis of cooperation with Iran prior to burning all bridges with the Saudis, or is this another one of Erdogan’s haphazard reactionary bursts?