The Organization of Islamic Cooperation convened in Istanbul this week to challenge Trump's decision on Jerusalem while the Trump administration prepares a new potential strategy for how to deal with Turkey. 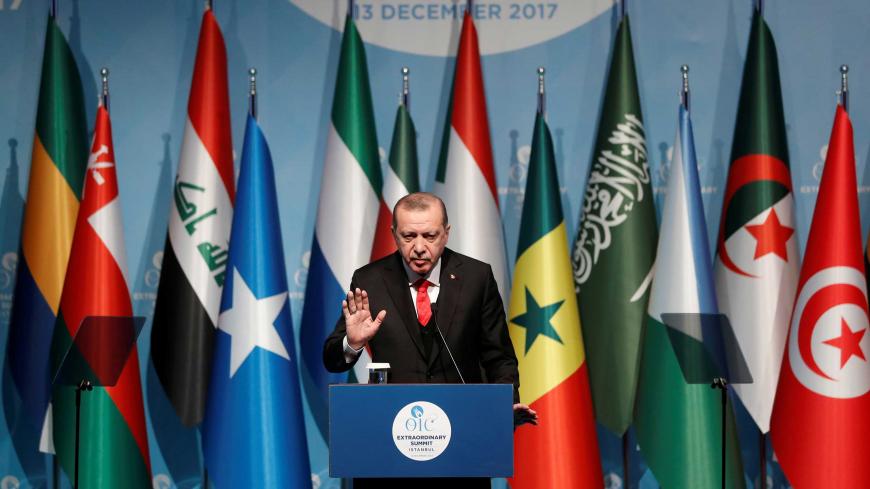 Nothing could better represent how Turkey’s pro-government elements see the result of the extraordinary summit of the Organization of Islamic Cooperation (OIC) that convened in Istanbul on Dec. 13 than the impassioned editor-in-chief of pro-government daily Yeni Safak, Ibrahim Karagul.

In his assessment of the summit, he wrote: “The US’ greatest outburst aimed at the region was thwarted by Turkey, with a major reaction rising from Istanbul, displaying a defiance. The Jerusalem crisis is no longer a crisis between Turkey and Israel, but has turned into a show of force between Turkey and the US. This is a geopolitical showdown. In this aspect, the matter, the fight is not limited to Jerusalem. It is the signal of new activity aimed at the entire region.”

“This is a historic attitude, a stance, an identity and an investment in regional resistance. The summit and the decision taken on Jerusalem is the harshest and most determined response to the US and Israel’s attempt to take the region hostage through the United Arab Emirates (UAE) and Saudi Arabia,” Karagul added.

While Karagul does not have a reputation for accuracy of his reports or analyses, he is known as one of the most passionate supporters of President Recep Tayyip Erdogan and is seen as accurately reflecting the feelings of Erdogan supporters.

Karagul is not the only one who saw a stunning foreign policy success for Erdogan. Though much more reserved in their assessment, many other Turkish columnists hailed the importance of the OIC’s final communique after the Istanbul summit. The leaders recognized East Jerusalem as Palestine’s capital. These columnists also emphasized the last-minute endorsement of Saudi King Salman bin Abdul-Aziz Al Saud, who was not present in Istanbul but represented by a junior minister.

For anybody who is knowledgeable about the Palestinian problem and Middle East politics, all such reactions show the poor quality of Turkish journalism when it comes to international politics. President Donald Trump’s decision to move the US Embassy to Jerusalem can be seen as a provocative foreign policy blunder or, to say the least, an ill-advised foreign policy decision. However, by itself it does not preclude a two-state solution, which, if ever reached, entails an independent Palestinian state with East Jerusalem as its capital.

In regard to Salman’s endorsement of the resolution, the Arab Peace Plan of 2002 to which the Arab world still subscribes carries the stamp and signature of Saudi Arabia. Thus, there is nothing extraordinary in Salman’s endorsement of the OIC’s final communique that did not go beyond the Saudi-sponsored Arab Peace Plan of 2002.

To assess the impact of the OIC’s Istanbul gathering and thereby the influence of Erdogan, the level of participation could serve as a better measure. Among the 56 member states of the OIC (Syria was expelled), 16 were represented by their heads of state.

It is hard to describe this picture as an impressive display of Islamic solidarity on the Jerusalem move.

Moreover, the presence of two figures captured the attention of the international media: Sudanese President Omar al-Bashir and Venezuelan President Nicolas Maduro. The former is wanted on charges of genocide and war crimes by the International Criminal Court. This was the first time he had appeared in Turkey since 2009. Erdogan had defended Bashir against the charges in 2009, saying that “a Muslim could not commit genocide.”

Apart from the problematic presence of the Sudanese president, Maduro’s presence could be seen as Erdogan's snubbing the United States.

A more interesting development was US National Security Adviser Gen. H.R. McMaster’s remarks on Turkey, which cast a shadow on Turkey’s display of influence at the Istanbul summit.

Speaking about radical Islamist ideology at a meeting in Washington with the British think tank Policy Exchange, McMaster said, “We didn’t pay enough attention to how it’s [radical Islamist ideology] being advanced through charities, madrassas [Muslim schools] and other social organizations. … [It] is now done more by Qatar, and by Turkey." He also claimed Turkey's growing problems with the West were largely a result of the rise of the ruling Justice and Development Party.

As important as the substance of what he said, it is noteworthy that those words came from McMaster, who is seen as the sober mind of the current American administration.

In the same speech, McMaster announced that Trump will roll out a new national security strategy Dec. 18 and that it will be based on four vital strategic interests for the United States.

According to the pro-government Daily Sabah, the US National Security Council, apparently in an attempt to do damage control and to assuage Ankara’s anger, reiterated its commitment to a strategic partnership with Turkey. “The U.S. said Wednesday [Dec. 13] it is ‘committed to its strategic partnership with Turkey to bring stability to the region and defeat terrorism in all its forms’ amid a row sparked by comments from a senior Trump administration official,” the report said.

A National Security Council spokesman told Anadolu Agency on condition of anonymity, "We appreciate Turkey's efforts to increase its border security, stem the flow of foreign fighters through its territory and fight on the ground to clear [the Islamic State] from key towns in Syria,"

However, considering Turkey’s performance during the OIC Istanbul summit and McMaster’s recent remarks, a train crash between Ankara and Washington is more likely than the two erstwhile but estranged allies' cementing their strategic partnership.