Erdogan’s supporters are among those who fear his vociferous campaign against the United States and Israel will leave him disappointed and regionally isolated. 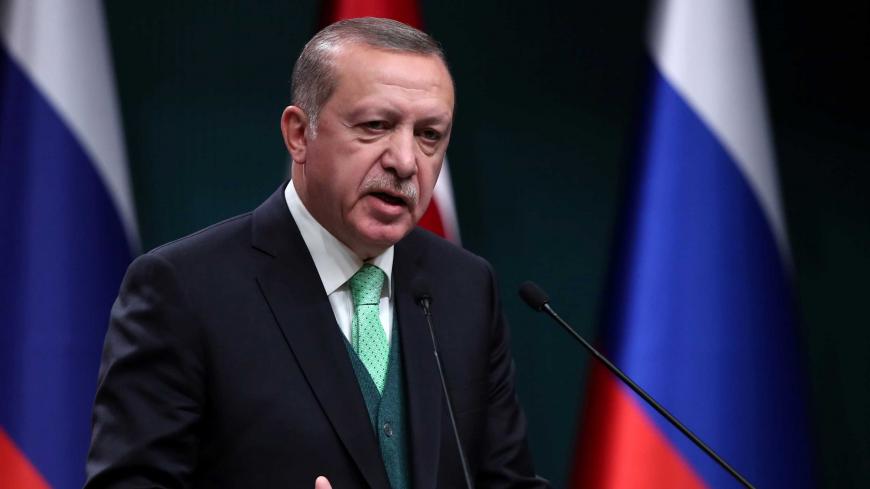 US President Donald Trump’s decision to recognize Jerusalem as the capital of Israel appears, at first glance, to have provided President Recep Tayyip Erdogan a new opportunity to play for leadership in the Islamic world while deflecting attention from his troubles at home.

Analysts believe, however, that the lack of support among Arab powers for the vehemence with which he is pursuing the campaign against the United States and Israel is likely to leave him disappointed in the end.

Nevertheless, Erdogan is gaining populist points, not just in Turkey, but also in the Middle East where his strong line on Jerusalem is praised and contrasted with the limp response from Arab regimes.

Addressing supporters in the central Anatolian city of Sivas on Dec. 10, Erdogan pointed to Security Council Resolution 478 adopted in 1980, which condemned Israel for declaring Jerusalem its capital, and went on to attack Trump.

“Hey Trump! How can you unilaterally deem the 1980 resolution void? Do you have such authority? Are you buying and selling property here?” Erdogan said, taking a dig at Trump’s real-estate empire.

Erdogan went on to label Israel a "terrorist state.” Referring to a picture that has gone viral of a large number of Israeli soldiers arresting and blindfolding a young Palestinian protestor, he poured scorn on the Israel military. “Look at what nearly 20 lowdown Israeli terrorists did to a 14-year-old boy,” Erdogan fumed.

Israeli Prime Minister Benjamin Netanyahu, who is no less acerbic than Erdogan, responded in like fashion.

"I'm not used to receiving lectures about morality from a leader who bombs Kurdish villagers in his native Turkey, who jails journalists, who helps Iran go around international sanctions and who helps terrorists, including in Gaza, who kill innocent people," Netanyahu told reporters in Paris during an official visit.

Erdogan nevertheless seems to have carried the day, since his bitter jibes and strong accusations aimed at the United States and Israel are always welcomed by Muslims around the world.

Wajih Nuseibeh, the head of the Palestinian family entrusted with opening the door to the Church of the Holy Sepulchre in Jerusalem every day, appeared to sum up the sentiment of the street in the Arab world.

In an interview with Hurriyet, Nuseibeh said Turkey was defending Jerusalem better than Arab leaders, whom he accused of “wasting time by clashing among themselves.”

Turkish antipathy toward Arab regimes also resurfaced again over the Jerusalem crisis, especially — but not exclusively — among Erdogan’s Islamist supporters.

Nuh Albayrak, the editor-in-chief of Star newspaper — which is a staunch Erdogan supporter — claimed in an article that Trump could not have arrived at his decision without the approval of the “global puppets at the head of Islamic countries.”

Albayrak said Turkey was the only country bothered with the plight of the Palestinians and the fate of Jerusalem.

Taha Akyol, a widely read liberal columnist for Hurriyet, echoed similar sentiments but went a step further and criticized the Arab public for what he said was its relatively mild response to Trump’s decision on Jerusalem.

“Arab societies today are silent, dormant and underdeveloped,” he wrote in his column, blaming this on the “absence of a democratic culture and free thinking” in the Arab world.

Erdogan told reporters in Athens last week, where he was on an official visit, that the disunity in the Islamic world is what had emboldened Trump to declare Jerusalem the capital of Israel.

He also made it clear that he wants concrete results from the emergency summit of the 57-member Organization of Islamic Cooperation (OIC) he called for in his capacity as the term president of the organization and which is due to convene in Istanbul Dec. 13.

Erdogan is hoping that this will produce a meaningful collective response to the United States and Israel and not just a hollow statement. If he can achieve this, it will also enhance his standing as a key leader in the Islamic world.

Erdogan has been down this road before, though, and he ended up having to eventually climb down from his moral high ground. His popularity in the Islamic world soared when he publicly scolded late Israeli Prime Minister Shimon Peres in Davos in 2009, accusing Israel of being adept at killing Palestinian children.

Nevertheless, the realities that govern the Middle East weighed heavily on him and forced him in the end to backpedal by, among other things, restoring normal ties with Israel in 2016, much to the annoyance of Islamists in Turkey and his admirers in the Middle East.

The normalization with Israel also came when Ankara was increasingly isolated in the region due to serious miscalculations it made relating to the Arab Spring. Erdogan’s strong support of the Muslim Brotherhood also left many Arab regimes questioning his regional ambitions.

Leaving aside the traditional antipathy felt among Arab regimes to the idea of “Turkish leadership” in the Middle East, these regimes are also unlikely to be too pleased with Erdogan’s support for Hamas, which is trying to start a new intifada against Israel. The last thing Riyadh, Cairo or Amman would want now is to see radicalized Islamic crowds take to the streets again.

The main focus of Sunni Arab powers today remains on Iran, despite Trump’s decision regarding Jerusalem, which clearly has complicated matters for them.

These powers are also unlikely to heed calls for punitive measures against the United States and Israel when they are busy developing strategic ties with Washington and indirect ties with Israel to counter the Iranian threat.

Veteran journalist Fehmi Koru, who has backed the Justice and Development Party and Erdogan in the past, also believes that the Muslim Brotherhood and Hamas, and not Israel, are seen as the principal threat by Arab regimes today.

Koru is concerned that Turkey will come out the overall loser if Erdogan fails to unite the Islamic world at the OIC summit. “My fear is that the waves created by Trump’s move on Jerusalem in the world have the potential to push our country into further isolation,” Koru wrote in his widely read and cited blog.

Erdogan may be relying on the OIC to produce concrete results regarding Jerusalem, but it wasn’t even clear at the time of this writing who would be attending the summit or what the level of representation from countries like Saudi Arabia and Egypt would be. There was also the question of whether common ground can be established at a summit attended by bitter rivals and their clashing agendas.

Kemal Ozturk from the pro-government daily Yeni Safak does not expect much to come out of the OIC summit. In an article on the subject, he referred to the OIC as “an organization that was established to do nothing, to spoil what has to be done and to prevent unity.”

Ozturk blamed the OIC’s ineffectiveness on “degenerate governments, incapable leaders and ignorant but ambitious administrators.” He said countries that prevent a strong result from the Istanbul summit should be declared “the greatest enemies of the Islamic world.”

Such views, which are clearly shared by many in government circles, are merely expressions of frustration and will change little on the ground given current developments in the Middle East.

This leaves Erdogan facing an uphill battle in trying to mobilize the Islamic world and casting himself as a key Islamic leader. His efforts are more likely to end up highlighting his failure in this respect — a distinct possibility that even his supporters concede — while fueling more suspicions among Arab leaders regarding his motives in the Middle East.