While Trump’s Jerusalem statement provided Erdogan an opportunity to present himself as the leader and spokesman of the Muslim world, the move could further polarize the region and destabilize Turkey. 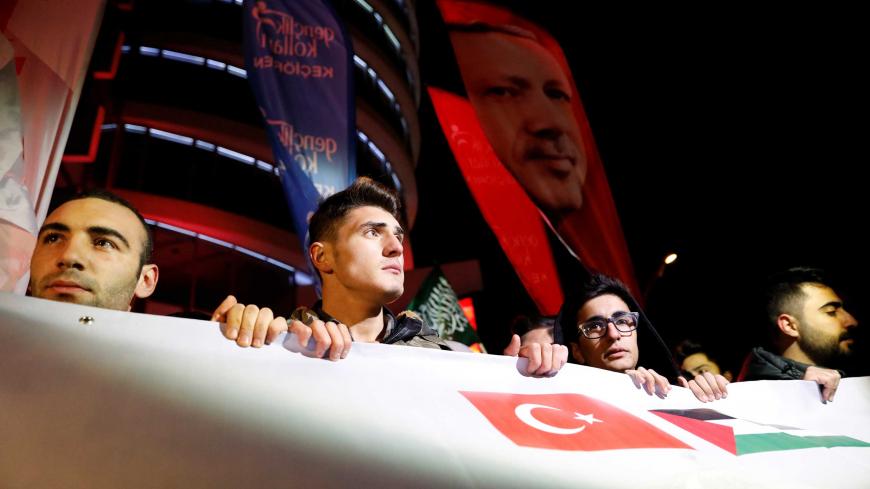 Demonstrators hold banners and a portrait of Turkey's President Recep Tayyip Erdogan during a protest against the US’ intention to move its embassy to Jerusalem and recognize the city of Jerusalem as the capital of Israel, near the US Embassy in Ankara, Turkey, Dec. 6, 2017. - REUTERS/Umit Bektas

Rashid Khalidi is a Jerusalemite-American, a renowned Columbia University professor and one of the leading scholars on the Palestinian issue in the world. He had been mentioned among Barack Obama’s inner circle before Obama moved to the White House. Commenting on US President Donald Trump’s move on Jerusalem in The Guardian, Khalidi wrote, “Every time it seems Donald Trump cannot outdo himself, he does it again. Now he has announced that his administration will recognize Jerusalem as Israel’s capital, reversing nearly seven decades of American policy. This step will have multiple negative ramifications, many impossible to predict. Jerusalem is the most important of the so-called final status issues that have been repeatedly deferred during the Israel-Palestine negotiations because of their extreme sensitivity. Trump has ploughed into this imbroglio like a bull in a china shop, zeroing in on the most complex and emotional issue of all those connected to Palestine.”

He added, “This act completely disqualifies the US from its longstanding role as broker, a position that Washington has monopolized for itself. So much for the pitiful ‘peace plan’ that Trump’s son-in-law Jared Kushner was cooking up and hoping to impose on the Palestinians.”

Trump’s very controversial decision to move the American Embassy in Tel Aviv to Jerusalem, which he recognized as the capital of the State of Israel, created an international uproar. Remarkably, even the most traditional Western allies of the United States denounced the decision with strikingly harsh language.

In a Dec. 6 editorial titled “Trump’s Dangerous Decision on Jerusalem,” the influential British daily Financial Times wrote, “Recognizing the holy city as Israel’s capital is a senseless provocation” and “an act of diplomatic vandalism.” It further said, “It is the more curious for the likelihood that no one will benefit from it, or at least no one interested in peace — not even Mr. Trump himself. He has united almost everyone against him, including his closest allies in the region, provoked outrage among Muslims, provided fuel for extremists and, not for the first time, diminished America in the eyes of the world. Nor has he served Israel’s interests well — though some Israelis might disagree.”

Among those who sounded infuriated was Turkey’s firebrand President Recep Tayyip Erdogan. He roared, “Hey Trump, what are you trying to do? Political leaders exist for reconciliation, not to stir things up. Mr. Trump’s statements are now virtually serving as a mixer.”

With such an allusion, Erdogan distanced himself from Trump at a time when he might have needed his American counterpart to help in an increasingly embarrassing trial going on in New York that implicates him in embezzlement charges and violating US (and also UN Security Council) sanctions that had been imposed on Iran. However, Erdogan’s salvos against Trump do not seem self-defeating.

On the contrary, Trump’s move seems to have come as a blessing for Erdogan, no matter the scale of his fury, reflected in his reminder that the Al-Aqsa Mosque and, therefore, Jerusalem itself was the Muslims’ first kiblah (before Mecca, when the first Muslims that gathered around Prophet Muhammad turned their faces in their prayers).

He used Trump’s decision of recognizing Jerusalem as Israel’s capital and moving the US Embassy from Tel Aviv to project an image of an astute statesman of international caliber. He said Trump’s move was pushing the world and especially the Middle East into “a ring of fire” and made phone calls to Russian leader Vladimir Putin and Pope Francis.

He said he would take up the issue with Germany and France as well and called a summit of the Organization of Islamic Cooperation (OIC) in Istanbul on Dec. 13. Turkey currently holds the rotating presidency of the 57-member organization, which represents a population of almost 2 billion people. Although it is a toothless organization with deep and irreconcilable divisions among member states, the OIC defines itself as "the collective voice of the Muslim world" and works to "safeguard and protect the interests of the Muslim world in the spirit of promoting international peace and harmony.”

More importantly, Trump provided Erdogan an opportunity to present himself as the leader and spokesman of the Muslim world, an image he is keen to attain.

Erdogan’s ostensibly statesmanlike posture in tackling Trump and trying to mobilize the Muslim world against him may help his eroding standing in the Turkish domestic political scene. However, it will most probably exacerbate the already troubled relationship between Turkey and its erstwhile strongest supporter, the United States.

The Muslim world is too weak and divided, and Erdogan is in no position to overcome its shortcomings. The OIC, which is a Saudi-inspired and Saudi-based institution, does not have the influence needed to mobilize the Muslim world. The arson at the Al-Aqsa Mosque in 1969 had given birth to the organization. Although the timing to regenerate the OIC over Trump’s decision on Jerusalem may look significant, Saudi Arabia is a staunch Trump ally in the Arab-Muslim world, and it is obsessively focusing all of its energy against Iran, along with its Sunni allies. Saudi Arabia’s basic convergence of interests with Israel also should not be expected to assist Erdogan’s efforts.

The OIC’s record proves that it cannot produce any result that would really hurt Israel and the United States. Thus, Erdogan’s efforts on the Jerusalem issue will most probably bear on bilateral Turkish-US relations, rather than scoring points to the benefit of Muslims on the international scene or for Turkey itself.

On Dec. 6, the day Trump announced his decision on Jerusalem, Svante Cornell and Halil Karaveli, two prominent analysts affiliated with the American Foreign Policy Council and the Institute for Security and Development Policy, respectively, published an article titled “Living on Different Planets: Washington, Ankara and the Zarrab Case,” on how Turkey and the United States are diverging from each other. “Reza Zarrab’s testimony in early December to a New York court was hardly helpful in breaking the impasse in Turkish-American relations,” the article said. “By implicating Turkish President Recep Tayyip Erdogan directly in the oil-for-gold trade that is the subject of the trial, Zarrab may have contributed to a new low in the fraught alliance.”

On that very date, Trump’s statement on Jerusalem came. The rift that emerged between the two leaders will put an additional and unbearable burden on the already troubled relationship between Turkey and the United States.

In the wake of Trump’s Jerusalem decision, Turkish-US relations will be in the path of further deterioration. In sum, the decision will not only further polarize the region but also destabilize Turkey.