During his speed visit to the region, Putin stopped over in Ankara to discuss Trump's Jerusalem move with Erdogan as well as moving forward with the sale of the S-400 missile defense system to Turkey. 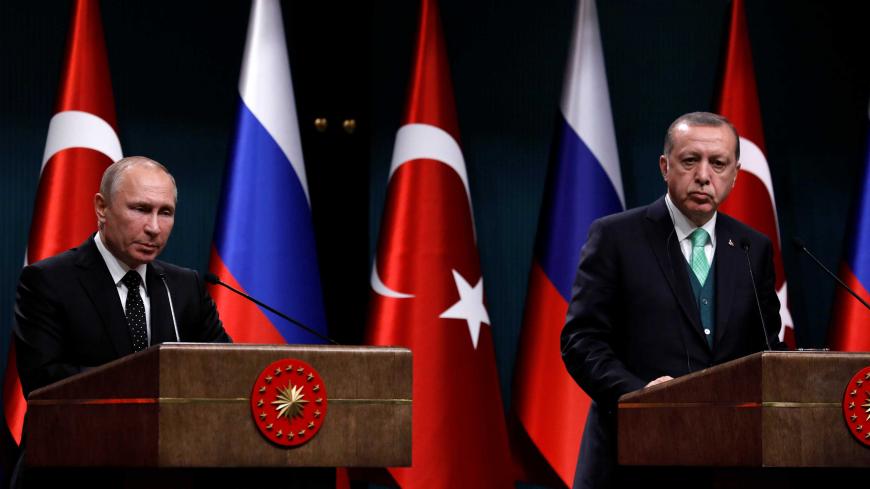 On Dec. 11, Russian President Vladimir Putin visited Ankara to meet his Turkish counterpart, Recep Tayyip Erdogan. The Turkish capital was the third destination of Putin’s one-day tour, during which he also visited Syria and Egypt. In November, the two leaders met twice in the Russian resort city of Sochi, when the Syrian crisis was dominating the agenda. This time, the talks focused on US President Donald Trump’s decision to recognize Jerusalem as the capital of Israel and move the US Embassy to that city, with the Syrian conflict still an important part of the discussion.

“Naturally, the focus was placed on the Middle East situation [and peace process] that has deteriorated dramatically and on Syrian affairs, where our countries are closely cooperating,” Putin told journalists after the talks with Erdogan.

Putin said Moscow and Ankara agree that the US decision to recognize Jerusalem as Israel’s capital is having a destabilizing effect in the region.

“Both Russia and Turkey believe that the decision of the United States’ administration to recognize Jerusalem as Israel’s capital and move its embassy to that city in no way promotes the settlement of the situation in the Middle East. On the contrary, it destabilizes the situation in the region, which is already tense,” Putin said.

The Russian leader said this decision may frustrate prospects for the Palestinian-Israeli peace process. “Russia insists that this settlement be implemented exclusively and fully on the resolutions passed earlier within the United Nations,” Putin said. He said the concrete parameters of an agreement on Jerusalem’s status are a subject for direct Palestinian-Israeli talks.

Prior to the meeting with Putin, Erdogan's stance on the issue was more hawkish. The Turkish president said, “With their decision to recognize Jerusalem as Israel's capital, the United States has become a partner in the bloodshed.” Erdogan said Turkey will not abandon Jerusalem to the mercy of a state that kills children and also called Israel “a terror state.”

Yet during the joint statement with Putin, Erdogan was more discreet, sharing a similar position with Russia. “I have observed that we share common opinions with Mr. Putin [regarding Jerusalem], and we've come to an agreement that we will sustain our decisiveness in this matter,” Erdogan said.

Before the meeting in Ankara, both presidents had already discussed the situation involving Jerusalem on the phone. On Dec. 7, a day after Trump announced his decision on Jerusalem, Erdogan called Putin to share his views.

A message published on the Russian president’s official website said of the call, “Both sides expressed serious concern in connection with the US decision to recognize Jerusalem as Israel’s capital and its announcing plans to move the US Embassy from Tel Aviv to Jerusalem. These moves can derail prospects for the Middle East peace process.”

Street protests broke out in main Turkish cities against Trump’s decision on Jerusalem. In Russia, however, while Muslims also fiercely opposed the US decision, there haven’t been any mass protests. The country’s leading Muslim organizations condemned Trump’s decision. The Russian Council of Muftis, a religious group representing the Muslim community of Russia, and the Central Muslim Spiritual Board of Russia said that they are joining the voices from all over the world that have called on American authorities to reconsider their "incorrect position."

Salah Mezhiev, the mufti of Russia’s Muslim region of Chechnya, said Muslims will never recognize Jerusalem as the capital of Israel. The mufti of Tatarstan, Kamil Samigullin, said Trump’s decision caused a stormy reaction. He wrote on Instagram, “Russian Muslims express solidarity in this matter with the entire Islamic world. Jerusalem cannot be the capital of Israel, because it is the spiritual capital of 1.7 billion Muslims. Moreover, Jerusalem is a common home and home for representatives of many national and religious groups.

On Dec. 13, the urgent summit of the Organization of Islamic Cooperation (OIC) took place in Istanbul, where more than 50 member states called on the world to recognize the state of Palestine and East Jerusalem as its "occupied capital." During his visit to Ankara, Putin had promised that Moscow would be represented at the summit. Russia, with its 20 million Muslim population, has observer status at the OIC, which it joined in 2005. This move may further solidify Russian-Turkish relations.

In Ankara, Putin and Erdogan also discussed the details of Turkey's purchase of the Russian S-400 missile defense system. The Turkish president said the purchase should be finalized this week.

“Our officials will come together in the coming week to finalize the S-400 issue,” Erdogan said during the joint news conference with Putin.

“Technical questions are being discussed, such as the interest rate. Everything is in the Finance Ministry,” Kozhin said.

Turkey expects to receive the first missile system in 2019, Turkish Defense Minister Nurettin Canikli said in November. The deal included two S-400 systems and the option for a third.

Ahmet Berat Conkar, head of the Turkish delegation to the NATO Parliamentary Assembly, told Al Jazeera that the purchase of the S-400 anti-aircraft missiles was solely based on technical and financial reasons. "Turkey picked the S-400 over other options because the missile system possesses more advanced technical features than its rivals, with a better price and shorter delivery time," Conkar said.

Turkey has been negotiating with Russia to buy the system for over a year despite NATO’s stance on the deal. Washington and some of its NATO allies see the decision as a snub because the weapons cannot be integrated into the alliance’s defense system. In Russia, many view the deal as a result of Turkey’s foreign policy reorientation amid worsening relations with the United States and NATO.