Russian President Vladimir Putin and Turkey's Recep Tayyip Erdogan met today in Ankara, where grandstanding alongside Putin is helping cement Erdogan’s image as a Muslim leader with a real hand in global affairs. 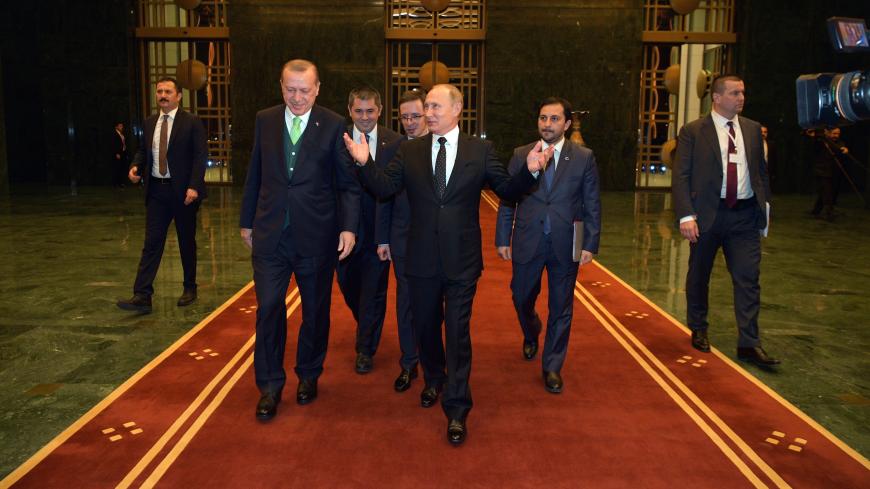 Turkey is the scene of a flurry of high-level diplomatic traffic this week with Russian President Vladimir Putin in Ankara today to hold talks with his Turkish counterpart, Recep Tayyip Erdogan. The two leaders will have tackled a broad range of bilateral matters, notably the conflict in Syria, energy and defense projects as well as the dispute over Jerusalem. The pair were all smiles as they posed for the media ahead of a banquet held in Putin's honor at Erdogan's sprawling presidential complex. At a news conference held in its wake, Erdogan announced that a highly controversial deal to purchase Russian made S-400 missiles would be finalized this week.

Head of US Central Command Gen. Joseph Votel and head of US European Command Gen. Curtis Scaparrotti were also due in town later this week to discuss Syria and NATO-related business with Turkish Chief of General Staff Hulusi Akar in a bid to defuse tensions over American support for Syrian Kurds affiliated with rebels fighting for Kurdish self-rule inside Turkey.

Turkey is planning to host an emergency session of the Jeddah-based Organization of Islamic Cooperation (OIC) on Wednesday to hammer out a joint strategy in the face of the United States’ decision to recognize Jerusalem as the capital of Israel. Erdogan has led the chorus of Muslim fury against the move, which pro-government media outlets claim was made with Saudi Arabia’s blessings. If true, it’s unlikely that the OIC will rally behind Erdogan, as many of its members rely on Saudi patronage.

It’s just as unclear whether Russia and Turkey can jointly do anything about Jerusalem. But grandstanding alongside Putin certainly helps cement Erdogan’s image as a Muslim leader with a real hand in global affairs.

The meat of the Erdogan-Putin meeting will likely be Syria, where UN-led efforts to find a negotiated settlement to the six-year-long civil conflict remain elusive as ever. Western diplomats express skepticism about the success of the current round of UN-sponsored talks in Geneva between the opposition and the Syrian government, which shows little appetite for any compromise.

Another obstacle is the absence of the main Syrian Kurdish opposition group, the Democratic Union Party (PYD). Turkey’s continued resistance to the PYD’s presence coupled with the fact that one of the main stakeholders, the United States, has no relations with either the regime or another critical actor, Iran, make a solution that much harder to achieve.

Prior to his scheduled visits first to Cairo and then Ankara, Putin made a surprise stop today at the Hymemim air base in Syria, where he told Russian servicemen that he had given orders to bring them home. “Over slightly more than two years, the Russian Armed Forces have routed together with the Syrian army the most combat-capable grouping of international terrorists,” Putin said. “In view of this, I have made a decision: Most of the Russian military contingent staying in the Syrian Arab Republic is returning home to Russia.”

Some analysts speculate that the announcement was calculated in part to lean on the goatishly obdurate Syrian President Bashar al-Assad. Moreover, the routing of combat-capable terrorists in Syria, as Putin put it, is by no means over and least of all in Idlib, where jihadis assembled under the banner of the al-Qaeda linked Hayat Tahrir al-Sham (HTS) continue to prevail.

Turkey’s cooperation in extinguishing the continued threat posed by HTS to the Assad regime is a key pillar of a separate peace initiative known as the Astana process, which brings together Turkey, Iran, Russia and representatives of the Syrian government and the armed opposition.

The talks, which kicked off in the Kazakh capital Astana last May, call for the establishment of so-called de-escalation zones allowing for a cessation of hostilities and the delivery of humanitarian relief to beleaguered civilians stuck there. The talks are set to resume in Astana for an eighth time on Dec. 21. A possible exchange of prisoners and of the remains of combatants will also be taken up in this round.

The details of any deal struck between the parties remain opaque. Turkey was expected to deploy peacekeepers along lines of contact between HTS and the regime in northern Hama, eastern Idlib and southern Aleppo, amid scattered hopes that they would loosen the jihadis’ grip. Instead, Turkish forces escorted by HTS militants took up positions just south of the Kurdish-controlled enclave of Afrin in mid-October, apparently to prevent the Syrian Kurds from moving further west.

Sam Heller is a Beirut-based fellow with the Century Foundation who has written extensively about the Syrian conflict. In a recent paper he contended, “Turkey’s intervention is — to my best reading, and per the evidence to date — based on a problematic, politically unpalatable compromise. To secure Turkish interests and safeguard at least some of Idlib’s residents, Turkey has apparently partnered with [HTS]. … By engaging Tahrir al-Sham’s mostly Syrian leadership, Turkey may be working to flush the northwest of transitional [jihadis] and al-Qaeda hard-liners who refuse to cooperate. Or, less charitably, it may just be looking after Turkish concerns and working with the local partner closest at hand.”

As the Syrian Kurds see things, Turkey will not relinquish its leverage over Idlib so as to continue wresting concessions from Russia over the PYD. A commander for the Kurdish-led Syrian Democratic Forces that is backed by the United States predicted in a WhatsApp exchange with Al-Monitor that Erdogan would press Putin further today to allow Turkey to intervene against the Kurds in Afrin. Akar will likewise urge Votel to end the Pentagon's support for them.

Setting aside the Kurds' well-grounded worries, Heller acknowledged in a telephone interview with Al-Monitor that Turkey’s strategy may also be the least rotten option when it comes to averting full-scale conflict between the regime forces and HTS. Such an outcome would send millions of more refugees toward Turkey’s borders or worse, result in a bloodbath.

“In its most ambitious form,” Heller noted, Turkey’s role would be to insert itself between HTS and regime forces. But doing so would pose a dilemma for the jihadis, for whom “surviving under Turkish auspices and fighting jihad against the Assad regime are incompatible.”

Untangling such contradictions won’t be simple, and ad hoc deals rather than grand compromises will likely continue to be the order of the day.

Correction: Dec. 11, 2017. An earlier version of this article said Gen. Votel was due to arrive in Ankara today. Rather, he is expected to arrive later this week.