Turkey’s Foreign Ministry has ramped up diplomatic efforts to get the Syrian government to halt its offensive in Idlib. 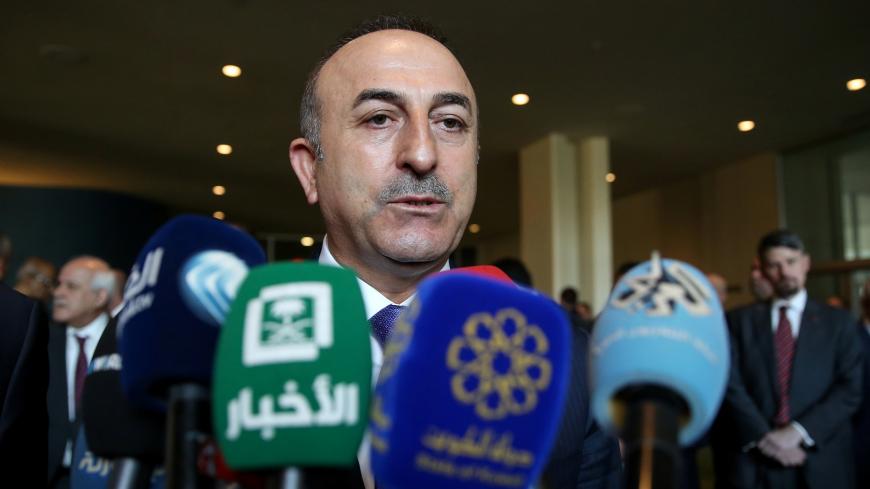 Turkey’s Foreign Ministry summoned the charge d’affaires of the United States, Philip Kosnett, today, making him the third foreign envoy to be called in the past 24 hours amid rising tensions with Russia over the Syrian government’s ongoing offensive in Idlib.

On Tuesday, Turkey gathered Russia and Iran’s ambassadors to air its displeasure, saying the offensive must be called off immediately. Turkey is protesting the Syrian regime's advances against the biggest remaining opposition stronghold in Syria on the grounds that regime troops are targeting jihadis and moderate rebels alike, thus undermining efforts to negotiate a peaceful solution to the Syrian conflict.

Turkish Foreign Minister Mevlut Cavusoglu pointed the finger of blame at Russia and Iran. He told the state-run Anadolu news agency in an interview today, “If you are guarantors — yes, you are — you should stop the regime. It’s not just a simple airstrike. The regime is moving in Idlib. The intent here is different.”

Cavusoglu suggested that the goal may be to “make some unwilling opposition groups go to Sochi.” He was referring to a planned national dialogue conference in the Russian Black Sea resort later this month. “It will backfire,” he claimed. It remains unclear how or whether the United States, whose military presence is confined to the swath of Syrian Kurdish-controlled territory falling between the Euphrates River and Iraq, can intervene.

Idlib is dominated by Hayat Tahrir al-Sham (HTS), an al-Qaeda-linked group that is led by the jihadis formerly known as Jabhat al-Nusra. The opposition alliance, unlike the Islamic State, is composed mainly of Syrians and remains the biggest threat to Syrian President Bashar al-Assad’s rule.

Idlib was designated one of four “de-escalation” zones agreed under the Astana agreement struck between Russia, Iran and Turkey last year. The cessation of hostilities was supposed to lay the ground for a diplomatic solution to the war. At the same time, it would facilitate humanitarian aid deliveries to hundreds of thousands of internally displaced Syrians, who are currently sheltering in Idlib in the direst conditions.

Turkey’s sharp reaction to the uptick in fighting suggests that the agreement struck in Astana, at least as it relates to Idlib, is unraveling. The immediate trigger appears to be the series of mysterious drone attacks on Russian military bases in Syria’s Latakia province since the start of the year. Moscow apparently believes Turkey did not stick to its side of the bargain either, amid accusations that Turkish forces chose to coexist rather than curb HTS when they moved into Idlib last October as peace monitors.

The Russian Defense Ministry said drones targeting Russian facilities in Kmeimim and Tartus on Jan. 6 had come “from the Muazzara settlement in the southwestern part of the Idlib de-escalation zone controlled by the armed forces of the so-called moderate opposition.” Russia’s state-run news agency Tass noted that the ministry had sent letters to Turkish military chief Hulusi Akar and spy boss Hakan Fidan stating, “It is necessary for Ankara to meet assumed obligations to ensure [compliance with] the cease-fire by the armed forces under its control.” Russia had earlier hinted that the United States might be involved in the drone attacks, saying they would need the assistance of a country that possesses satellite navigation technology. The Pentagon has denied any involvement.

Aaron Stein is a senior resident fellow at the Atlantic Council who has written extensively on the Syrian conflict. He told Al-Monitor in an interview, "The basic framework at Astana was for the regime to take back control over territory as far north as the train tracks [connecting the Idlib and Aleppo governorates]. Turkey agreed to this arrangement, I would presume because there was also an assumption made that the al-Qaeda elements within HTS could be dealt with through intra-rebel pressures." For whatever reason — some argue Turkey never intended to confront HTS and is more interested in going after US-backed Syrian Kurds in neighboring Afrin — it did not work. Thus now "the regime is taking back territory by force and to do so they have to bomb throughout Idlib to weaken [opposition] supply lines. It looks like the Idlib de-escalation is falling apart," Stein observed.

In his comments to Anadolu today, Cavusoglu insisted that Turkey had been trying to enforce the cease-fire in Idlib so that civilians could continue to return, but “some terrorist groups have infiltrated the region.” In other words, the perpetrators of the drone attacks were not local rebels under Turkey’s supervision. He then shifted the blame back to the regime saying, “If there is a terrorist organization there, these groups should be identified. Careful operations should be carried out with intelligence from the ground or with technology.”

Meanwhile, Syrian government forces, backed by warplanes and attack helicopters, are closing in on the strategic Abu al-Duhur air base in the eastern Idlib countryside. According to the London-based Syrian Observatory for Human Rights, regime troops were within several hundred meters of the air base, which is controlled by HTS and its allies.

The United Nations said at least 60,000 civilians had been displaced by the latest government offensive that began in November against the rebels in Hama and Idlib. Many are said to be heading toward the Turkish border. Turkey is already hosting over 3 million Syrian refugees and says it can ill afford to accommodate any more, another big reason Ankara wants what is beginning to look like an all-out assault against Idlib called off.