Syria to get civilian safe zones

Cease-fire mediators have agreed to establish and enforce areas free from fighting in Syria. 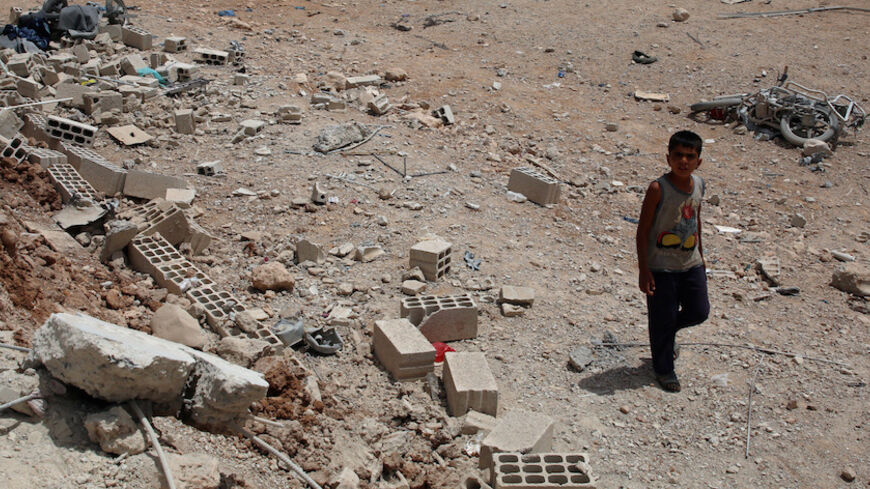 A boy walks at a site hit yesterday by barrel bombs in a rebel-held area, south of Daraa, Syria, May 1, 2017. - REUTERS/Alaa Al-Faqir

Mediators from Russia, Turkey and Iran signed a memorandum May 4 to create four safe zones for civilians in Syria, a major milestone in the fourth round of cease-fire talks in Astana, Kazakhstan.

Speaking at a Russian Defense Ministry briefing May 5, Deputy Defense Minister Lt. Gen. Alexander Fomin credited the “constructive attitudes of Turkey and Iran” and the “helpful position of the United States.”

The formation of the initiative, as revealed by Russian military leadership, had a twisted pre-history. President Vladimir Putin initially tasked the Russian Defense Ministry to elaborate on ways to secure the cease-fire. On April 25, a special working group of the Defense Ministry went to Damascus for meetings with the Syrian government. On April 26, the group moved to Turkey for meetings with Turkish leadership in Syria and militant opposition groups.

Lt. Gen. Stanislav Hadjimagomedov, the deputy head of the Main Operational Directorate of the General Staff of the Russian Armed Forces, recalls those meetings: “We explained to them the Russian approaches to the ‘safe zones’ concept, and the ways we propose to monitor them.” Meanwhile, a Russian military delegation was having similar meetings in Iran and Oman.

“It was critical to get support from Turkey, Iran and the opposition groups,” Hadjimagomedov said. According to Fomin, the safe zone issue also involved talks with others, including Israel. “There have been extensive contacts between different security and intelligence services,” he said at the briefing. By the time Putin contacted US President Donald Trump and Turkish President Recep Tayyip Erdogan, a political decision to set up the zones appeared to have been made; they helped finalize the details.

Moscow seems to especially cherish three remarkable achievements prior to the talks in Astana: Turkey and Iran claimed responsibility for their part of working with the parties in conflict; the United States and Saudi Arabia provided moral support for the initiative, and the United Nations offered mediation support; and some key opposition field commanders echoed the sentiment for the deal. The memorandum was agreed upon by 27 “warlords” that actually operate in the de-escalation areas.

When the parties ultimately came May 3-4 to Astana, Russian representatives observed that a lack of trust between the Syrian government and opposition forces was a major impediment to the initiative. Another insider of the Astana talks, who asked that his name not be used, told Al-Monitor, “Everybody there wanted to leave the room with some kind of final paper to sign, but the initial positions looked irreconcilable.” From what those privy to the talks share, it is clear that the three mediators had to do a lot of pushing and compromising despite all the pre-agreements.

At the end of the day, the troika’s efforts, as well as the “targeted work,” as a Russian general put it, with opposition groups and the Syrian government led to the final decision. At the briefing, Hadjimagomedov was generous in praising the United Nations, and especially the UN special envoy for Syria, Staffan de Mistura. “He has had a special impact on the initiative, as he held a number of critical meetings with opposition figures whenever the talks stalled,” Hadjimagomedov said. He also credited the conflicting parties, saying, “Although they were not on the same page and continue to fight each other, they recognize the sense of responsibility for the future of the Syrian people.”

Safe zones, de-escalation zones and no-combat zones seem to be euphemisms for “no-fly zone,” which had been promoted under the administration of former US President Barack Obama and supported by Hillary Clinton as she campaigned to succeed Obama. At the time, Moscow opposed the idea, perceiving it as a way, first and foremost, to prevent Russian flights over Syria. The issue had the potential to lead Moscow and Washington into a direct military clash. With Trump in office, safe zones were never off the table, but it was barely clear what exactly the term implied.

As Moscow has sought a reliable way to move the Syrian conflict from the battlefield into the political realm (the conflict has gradually claimed more Russian lives and drained more resources) the idea of safe zones became worth exploring. The concept only had to be recalibrated to meet at least three objectives: to not impede Russia’s own military actions on the ground; to be packaged as Russia’s own political achievement domestically; and to be presented as a genuine international effort co-mediated by Turkey and Iran to get them on board. Besides, such a move would also be helpful to show Syrian President Bashar al-Assad and the Iranians that Moscow is not “selling them out to Americans” as they fear. At the same time there is an understanding that without Washington, implementing the initiative would be more difficult. Hence, Russia’s Defense Ministry said it is willing to resume discussions with the United States — which Russia halted after the strikes on Shayrat air base — on a flight safety memorandum designed to prevent midair collisions.

For now, the Russian Defense Ministry says safe zones will be a key tool in securing these immediate goals:

Most importantly, the memorandum is seen as a key step to stop the fighting in Syria.

Operationally, Russians believe that the safe zone initiative will untie the Syrian government’s hands and help Assad direct forces to liberate central and eastern parts of Syria from IS, including territories along the Euphrates River and east of Palmyra. All that would help with preparing a large-scale offensive on IS-held Deir ez-Zor. The Russian military makes it clear it will support those efforts with its airstrikes.

Describing how the safe zones are going to be organized, Sergei Rudskoy, the chief of the Main Operational Directorate of the General Staff, explained that the first zone will include Idlib province in northern Syria, northeastern Latakia, western Aleppo and northern Hama. More than a million people live in the territory — it’s the biggest of the four zones — which is now controlled by 14,500 militants.

The memorandum doesn’t rule out prospects for creating new “de-escalation zones” — the Russian military has discussed having as many as seven. So far, the rules established for the safe zones include no fighting within the zones between the government and those opposition forces that have joined the cease-fire. Remarkably, that covers all kinds of weapons and includes airstrikes.

For the de-escalation zones to function properly, the military has proposed setting up security lines along the zones’ borders with monitoring and check points to control the cease-fire and people’s movements. Russian, Turkish and Iranian military personnel will manage the zones, with the possibility for third parties to participate if Iran, Turkey and Russia all agree.

There are some caveats that might seem to serve as loopholes for the Russian military.

“[The] signing of the memorandum doesn’t mean we will stop our fight against terrorists, against [IS and Jabhat Fatah al-Sham]. By the memorandum, intermediary states claim responsibility to fight [them], as well as to help the Syrian government and opposition fight them in other parts of Syria,” said Rudskoy.

According to the Russian Defense Ministry, violations of the cease-fire in the safe zones “will be investigated on individual bases and punishment will be applied,” including in cases of suppressive fire.

This seems to be an important step made in the Syrian civil war, though the initiative is rather raw and in many ways deserves fair criticism. In the next two weeks, Moscow, Ankara and Tehran will create a working group to outline ultimate borders for the safe zones, map security and buffer lines to separate moderate and extreme opposition groups, and promote trust-building measures between the government and the opposition, such as freeing hostages and prisoners of war. The working group will report progress during subsequent Astana talks and other meetings.

This process doesn’t promise to be easy and might collapse like all the previous peace initiatives. But the parties have yet to come up with a better way to settle the crisis.